Posted on April 18, 2021 by beyondnuclearinternational 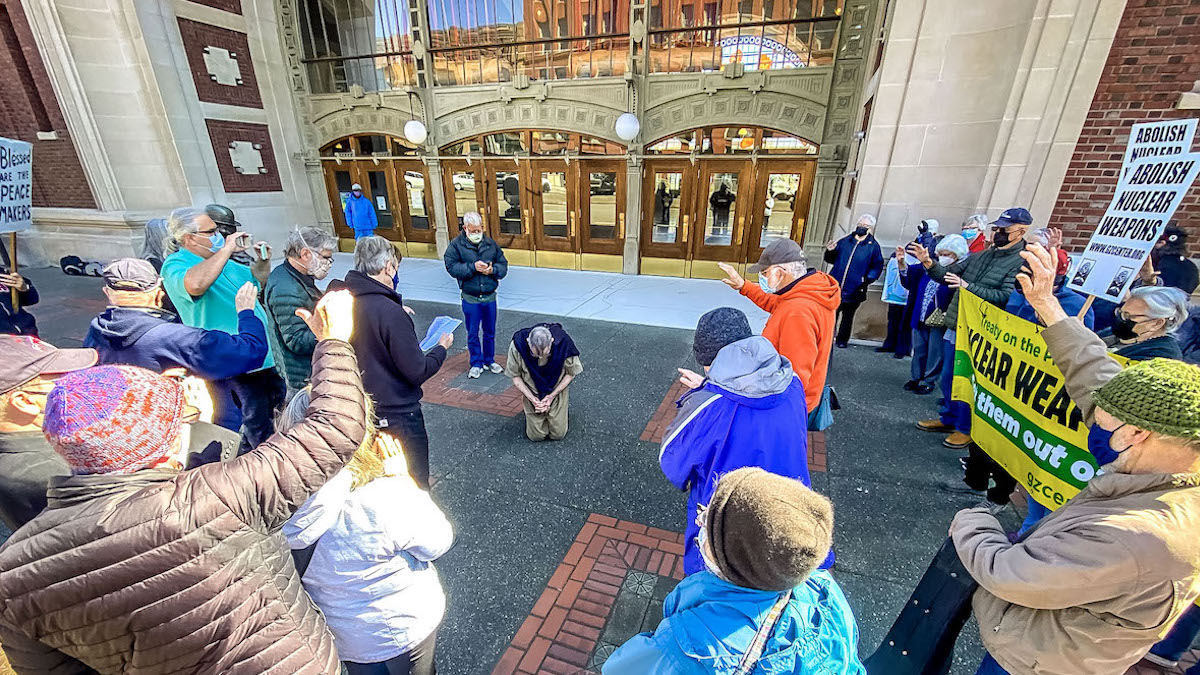 Released from jail, Fr. Steve Kelly insists no one is truly free under the threat of nuclear omnicide

When Father Steve Kelly, a nuclear resister and Jesuit priest, walked out of a Tacoma, Washington courthouse on April 13, 2021, he was still wearing his prison khakis. When he was taken from jail in Georgia in mid-December to be transported to Tacoma, he had left in chains.

Now Kelly was a free man. But for how long? In Tacoma, Magistrate Judge David Cristel sentenced Kelly to time served, and released him without conditions. Kelly had effectively served the maximum six-month prison sentence for violating conditions of his supervised release for a 2017 trespass conviction at the Trident nuclear submarine base in Silverdale, Washington during a Pacific Life Community nonviolent direct action.

But now Kelly must report to the probation department in Georgia to begin three years of supervised release to fulfill the terms of an earlier sentence for his part in the April 4, 2018 trespass onto the Kings Bay Trident submarine base there, an action by the Kings Bay Plowshares 7. And that will likely spell more necessary trouble.

Prison garb and chains are not unfamiliar to Kelly, a man of conscience, who is unlikely to give up his peaceful non-violent protests against nuclear weapons any time soon. As he told the Tacoma court:

“This is the way to love everyone in this courtroom. This is the way to love our fellow human beings, is that I had to take a stand against the nuclear weapons. And of course what happened in Georgia… was a continuation of my acting in conscience. I think that it’s probably best said that while there are nuclear weapons out there, my conscience will probably be very consistent about this.”

Kelly won’t go to Georgia. It will be up to US marshals to bring him back there.

Kelly has consistently refused to cooperate with any probationary terms — community service, fines or supervised release — throughout his history of resistance. He has also been clear and direct with judges as to his intentions. When asked by the judge during his original 2017 sentencing in Tacoma if he would participate in supervised release, Kelly replied, “Please, please, I cannot do supervised release. I’m asking you to translate it into a period of incarceration.”

By the time of Kelly’s later arrest in April, 2018 at Kings Bay, a bench warrant had already been issued for his arrest for violating the terms of his supervised release by not reporting to the federal probation office in Washington state.

The Jesuit priest remained in jail in Georgia from the time of his Kings Bay arrest through trial in October, 2019 and his sentencing in October, 2020 to 33 months in prison plus restitution and three years of supervised release.

With credit for time served, he had essentially completed the custodial sentence but remained in federal custody pending the April 13th hearing in Tacoma. The journey from Georgia to Washington state took more than 3-1/2 months, with stays at three more private prisons and jails along the way in Florida, Oklahoma and Nevada.

In April, Blake Kremer, Kelly’s lawyer, successfully persuaded the Tacoma probation office that Kelly would have served his maximum sentence by the April 13th hearing date and therefore the court could not impose any additional conditions. Kelly appeared in court in person for his sentencing while his supporters were able to listen in by phone. Many greeted him joyfully outside upon his release.

Kelly, 72, was ordained a Roman Catholic priest in the Jesuit order in 1990, and engaged in his first Plowshares action — “Jubilee Plowshares” — in 1995. Since then, he has participated in numerous Plowshares actions and other witnesses against nuclear weapons and war making. In that time he has spent over 10 years behind bars, and roughly one-third of that time in solitary confinement (for non-cooperation).

Kelly is deeply committed to the Biblical vision of Isaiah 2:4 that nations “shall beat their swords into plowshares, and their spears into pruning hooks; nation shall not lift up sword against nation, neither shall they learn war any more.”

Most recently, on April 4, 2018, on the 50th anniversary of the assassination of Dr. Martin Luther King, Jr., Kelly and six others, known as the the Kings Bay Plowshares 7, entered Naval Submarine Base Kings Bay, the US Navy’s East Coast Trident nuclear ballistic missile submarine base.

All seven defendants pled not guilty, insisting that they had not entered the base to commit a crime, but rather to prevent one from occurring, the crime of “omnicide”, the destruction of the human race which is possible in a nuclear war.

In the face of this threat that the US nuclear arsenal poses to the world, they believed what they had done was not illegal, but a “symbolic disarmament”, an act of necessary civil resistance. All seven were found by a jury to be guilty on three felony counts and a misdemeanor charge.

Prior to the action at Kings Bay, Kelly and four others, in what is known as the Disarm Now Plowshares, were arrested at Naval Base Kitsap-Bangor on All Souls Day, November 2, 2009, after entering the nuclear warhead storage depot (Strategic Weapons Facility Pacific), to expose the nuclear warheads that are deployed on OHIO Class “Trident” ballistic missile submarines. Bangor is home to the largest concentration of deployed nuclear weapons in the U.S.

In addition to being what the US government calls “the most survivable leg of the US nuclear triad,” they are arguably a first-strike nuclear weapon, which is inherently destabilizing to any efforts toward cooperation and disarmament efforts with Russia.

The continuing warhead modernization and current construction of the next generation of ballistic missile submarines, with plans for a new warhead and missile, is contributing to a new and dangerous nuclear arms race.

As a person of deep spiritual convictions, Kelly understands that “It’s a Sin to Build a Nuclear Weapon,” as Jesuit Father, Richard McSorley, once wrote. McSorley explained that, “The taproot of violence in our society today is our intention to use nuclear weapons. Once we have agreed to that, all other evil is minor in comparison. Until we squarely face the question of our consent to use nuclear weapons, any hope of large scale improvement of public morality is doomed to failure.”

Reaching to the heart of Gospel teachings, in Kelly’s own words: “The Gospel has many instances of the parables of Jesus inserting himself between the flock and the dangers; namely the thief and the wolf. In today’s or rather contemporary application of the Gospel, Christ is incarnate in the poor in the flock and the thief is the budget dedicated to war profiteering and nuclear annihilation. The wolf is the ever-present danger of the threat and, God forbid, the use of nuclear weapons. So it is my life long quest to imitate the Good Shepherd. I will insert myself between the dangers and the flock.

“In order to use my limited time I will, along with others, try to embody the vision given to us through the prophet Isaiah. It is a conversion of weapons to devices for human production. The gift of Isaiah 2:4 is an economic, political, and moral conversion of the violence of nuclear annihilation. With others, I hope to be instruments in God’s hands for showing a way out of the escalation, the proliferation of this scourge of humanity. I feel strongly that Martin Luther King Jr. would agree with the principle I attribute to Gandhi that we cannot be fully human while one nuclear weapon exists.”

Aside from Fr. Kelly’s deeply held, and practiced, beliefs, courts in the US have consistently refused to allow Kelly (and other Plowshares activists) to present any kind of reasonable defense. Federal prosecutors have asked, and judges have agreed, in nearly every case, to prohibit the defendants from introducing anything constituting a reasonable defense — including religious motivations, international law and treaties, Nuremberg principles, necessity defense, or the existence, numbers, or lethality of nuclear weapons, all of which are established, public knowledge and/or precedent.

In contrast to the repressive court system in the US, Plowshares actions have also occurred in Australia, Germany, Holland, Sweden, New Zealand, Scotland, Ireland, and England, and many of the trials in these cases resulted in jury acquittals,  In the case of the Pitstop Ploughshares, five members of the Catholic Worker Movement who damaged a United States Navy C-40 transport aircraft (en route to Iraq) at Shannon Airport, Ireland in 2003 were allowed to present a reasonable defense and were acquitted by a jury that determined the defendants had acted to save lives and property in Iraq.

Rather than prosecute Kelly and others who attempt to shine the light of conscience on nuclear weapons, which represent an omnicidal threat to humanity, the US government should instead listen to their warnings. The US should begin, as required by Article VI of the Treaty on the Non-Proliferation of Nuclear Weapons (NPT) — and to which the US is a signatory — to “pursue negotiations in good faith on effective measures relating to cessation of the nuclear arms race at an early date and to nuclear disarmament, and on a treaty on general and complete disarmament under strict and effective international control.”

For now, Kelly is free from incarceration, yet he will continue in his holy resistance to nuclear weapons because of his deep faith, and his understanding that so long as the nuclear-armed nations hold humanity under the threat of nuclear omnicide, no one can be truly free.

Author’s note: Linda Pentz Gunter of Beyond Nuclear contributed to this story. Thanks also to Jack Cohen-Joppa of the Nuclear Resister, and the Kings Bay Plowshares, for their contributions to this article.

Leonard Eiger is a student and practitioner of nonviolence, working for the abolition of all nuclear weapons. He coordinates media & outreach for Ground Zero Center for Nonviolent Action and also coordinates the Puget Sound Nuclear Weapon Free Zone and the NO To NEW TRIDENT Campaign.

Headline photo of Fr. Kelly emerging from the Tacoma courthouse by Blake Kremer.