At risk of their lives

Posted on March 7, 2018 by beyondnuclearinternational

The province of Madhya Pradesh sits right in the center of India. It gained notoriety internationally as home to the city of Bhopal, site of the world’s worst industrial accident. On December 2 and 3, 1984 a leak of methyl isocyanate and other gases from the Union Carbide pesticide plant there exposed more than 600,000 people. Although official figures list fewer than 4,000 deaths resulting from the accident, the likely figure is closer to 16,000.

Although the Bhopal site is now abandoned, it remains toxic and has not been adequately cleaned up. The surrounding communities are still fighting for compensation, suffer chronic health problems and a high rate of birth defects.

The story is a classic example of corporate crime, with Union Carbide and later Dow Chemical, which took over the plant, disputing fatality figures among other stalling tactics. It is reminiscent of similar efforts by American companies, including Dow, to avoid compensation for the victims of Agent Orange, a dangerous and persistent dioxin sprayed on Vietnam — and on its people and US military personnel — during the American War there.

Today, Madhya Pradesh is once again at the center of industrial iniquity, but this time the source is the country’s own government and the industry in question is nuclear power.

In the Narmada valley, which once before displaced its people to make way for the Bargi dam on the Narmada river, locals are fighting a new eviction effort, this time for a nuclear power plant project. It is planned for the small village of Chutka, landlocked and without a large body of water to supply the plant its cooling. And it is mainly the women who are leading the fight. When officials affiliated with the Nuclear Power Corporation of India Limited (NPCIL) arrived to take soil samples, they were chased off by village women who also seized their equipment.

The dam ousted the community in the last 1960s and closed in 1990. The protests at the time of displacement attracted little attention. The population is largely Gond “adivasi” or “aboriginal.” Their rights are virtually non-existent. Since the dam closed, locals fought for the restoration of forest land, water rights and farming. Despite some concessions, water for irrigation was diverted for a nearby thermo-electric power plant.

Now, more water will be diverted for the proposed four 700 mw Indian-built nuclear reactors. Hundreds of thousands of adivasi people are waging an intense yet peaceful struggle against the nuclear project, which threatens their safety, lives and livelihoods.

If the idea of building a heavily water-consuming nuclear power plant in the middle of India, rather than on coastal waters, sounds foolhardy, it is. Bringing this nuclear insanity to the world’s attention has become a priority for the people of Chutka, and also for Kumar Sundaram, one of India’s best known anti-nuclear activists.

Sundaram runs the comprehensive international website, dianuke.org. He also travels in India and overseas, and advocates for justice for those threatened by or dealing with nuclear installations in India, whether nuclear power plants or uranium mines.

In December 2017, Chutka villagers staged a major protest. Sundaram posted on it for The Ecologist and Dianuke.

The new nuclear project was approved in principle by the central Indian government in 2009 but was opposed from the outset by the people pf Chutka, Tatighat and Kunda. Village councils passed unanimous resolutions against the project, and approached the President of India, Governor and Chief Minister of the State and the Chairperson of the Central Commission for Scheduled Castes and Scheduled Tribes.

Public pressure forced the cancelation of the project twice in 2013 but it is back on the table. In 2014, authorities held a so-called public meeting, but villagers were kept away at gunpoint. Undeterred, they protested en masse outside. In India, perhaps more than anywhere else, the incompatibility of nuclear energy with democracy is never more evident. In India, it takes real courage — and the willingness to risk one’s life — to oppose nuclear power.

In September 2012, a local fisherman was shot dead by authorities during a protest against the Russian-built Kukandulam reactors in Tamil Nadu, India. Protesters there also say they have been subjected to “psychiatric counseling.” The planned French EPR reactors in Jaitapur have also seen massive opposition movements. 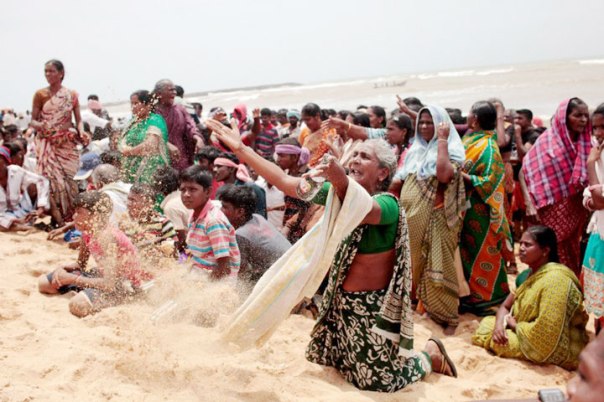 As Sundaram describes the plight of the Chutka villagers, “Besides the 3 villages – Chutka, Tatighat and Kunda – which will have to be immediately evicted, thousands of farmers and fisherfolk will lose their means of livelihood as they are dependent on parts of the reservoir for fishing and strips of land which they get to farm every year temporarily when water recedes. These areas will become out of bounds for them as a strict security structure will spring up along the reactors. Additionally, the hot water discharged from the reactor will be put back into the reservoir, raising the water temperature by 3 to 5 degrees, turning fishing or aqua-farming impossible in adjoining areas.”

Nationally, the Indian government has tried to stigmatize anti-nuclear protesters, calling them anti-patriotic or criminal. Protest leaders have been charged with “sedition” and “waging war against the country.” Similarly to the Russian situation, Indian NGOs have been threatened as outside agitators or foreign agents. Those of us in the West may take our right to free speech and protest for granted, and can return home to the comfort of our nuclear power-warmed dwellings. In India, the poor, the disenfranchised and the desperate fight on. They are villagers, farmers and fishermen and they say they have nothing to lose. But if the nuclear oligarchy prevails, they could well lose everything.

For more on anti-nuclear in India — and indeed the rest of the world — see the  Dianuke website.