Posted on March 11, 2018 by beyondnuclearinternational

Update: Nicolas Sarkozy has now been charged with corruption in relation to bribes from Libya. But in 2007 the then French president couldn’t wait to rush to Libya to try to sell then Libyan premier, Moammar Gadhafi, French made nuclear power plants. And as we now watch the Middle East race to nuclearization, here is what Sarkozy said then: “If we dare to say that civilian nuclear energy is reserved for the northern coast of the Mediterranean and that the Arab world is not responsible enough for nuclear energy, then we are humiliating them and paving the way for a war of civilizations.” Clearly, any security concerns were over-ridden by nuclear profiteering and, as it turns out, potentially the personal kind as well.

The following article first appeared on Truthout on March 9, 2018. Since its publication, and as anticipated, France and India have now inked a deal to “accelerate” the French nuclear project at Jaitapur.

Ten years ago, The Washington Post called then-French president Nicolas Sarkozy “the world’s most aggressive salesman for nuclear power.” Today, that mantle has been passed to the country’s current president, Emmanuel Macron — just another case of  “plus ça change, plus c’est la même chose.” (“The more things change, the more they remain the same.”)

As if to dispel any remaining doubt about his commitment to the French nuclear sector, Macron was happy to accept an invitation to India to cement a French nuclear deal there, according to Indian officials. He was scheduled to ink the deal on March 11, the seven-year anniversary of the Fukushima-Daiichi nuclear power plant disaster in Japan. Ironically, just a few days later, former Japanese Prime Minister Naoto Kan, now an outspoken critic against nuclear energy, will be at the Flamanville European Pressurized Reactor (EPR) Unit 3 site in France to support anti-nuclear activists and their campaign to halt construction.

A series of major financial and technical setbacks at French nuclear projects at home and abroad have thrown the French state-owned nuclear companies Areva and Électricité de France (EDF) into virtual bankruptcy, saved only by taxpayer bailouts. Despite his stated intention to “modernize” the aging French nuclear fleet while allowing some closures, Macron will have to accept an inevitable reduction in France’s 75 percent reliance on nuclear energy for electricity and domestic heating. Consequently, in order to maintain French nuclear “prestige,” and to resuscitate EDF and Areva, Macron is intent on remarketing French nuclear technology abroad, to anyone and everyone who will risk buying into it.

One of Macron’s most enthusiastic customers is India, currently embarked on what Indian activist and writer Kumar Sundaram calls a “nuclear shopping spree.” France is lined up to construct what would be the most massive nuclear power project in the world at the port of Jaitapur on India’s west coast, about 230 miles south of Mumbai.

France wants to build six EPR nuclear power reactors there, producing 9,990 megawatts of electricity. Never mind that the EPR, the Areva-designed and EDF-constructed French nuclear flagship, is mired in controversy in France and Finland, where both construction sites are massively over budget, years behind schedule, and plagued by technical mistakes and charges of fraud and cover-up.

The official reason for Macron’s India visit was originally the occasion of the International Solar Alliance summit in New Delhi. However, it became clear that the  summit would be just a public relations pit stop after the countries announced that they would likely sign a framework agreement during Macron’s visit, designed to expedite the Jaitapur nuclear project. (This has since happened.)

The agreement plan was already hinted at by French diplomat Jean-Yves Le Drian, who told the press during a January stop in India that he was there to prepare for Macron’s March state visit, and that the Jaitapur EPR project was “well on its way.” A stumbling block remains India’s nuclear liability law, which the Modi government, under heavy pressure from the US and French governments in particular, is endeavoring to weaken as it holds not only nuclear operators but suppliers liable for the costs of an accident. Reports say France is still “seeking an assurance over the liability clauses.”

France Pitches to Saudi Arabia, China and the UK

France lost out on a lucrative nuclear power contract with the United Arab Emirates (UAE), where South Korea is now close to completing the first of several reactors. But France, along with the US, has instead set its sights on another eager buyer: Saudi Arabia, a country with massive nuclear plans — 17,600 megawatts from 16 reactors and with $80 billion to spend. Such a nuclear deal, if it goes forward, could further exacerbate tensions with Iran, which is developing its own nuclear power program. Saudi Arabia is looking to at least 10 other vendor countries to meet its ambitious nuclear goals.

China is also on Macron’s nuclear shopping list. He was there in January, where he brashly announced that, “The forthcoming opening in Taishan of the first EPR in the world, which is French-Chinese, demonstrates our ability to undertake ambitious industrial projects together.” That same week, further delays were announced at Taishan due to cracks reportedly found in a reactor component at the site. It marked the third delay in two years. 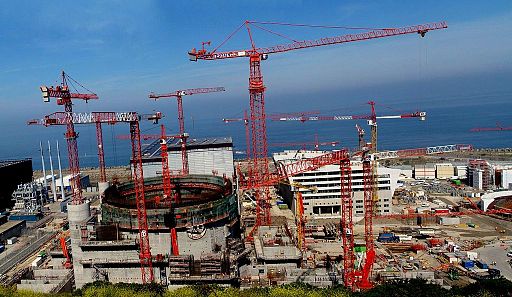 Flamanville 3 has been plagued with construction and falsification problems, delays and cost over-runs.

Furthermore, the French nuclear sector has been welcomed into the UK with unbridled fervor, winning a contract for two EPR reactors at the Hinkley, Somerset site. The United Kingdom is steadily phasing out its handful of aging nuclear power plants — an opportunity that should have opened the way to long-overdue development of renewable energy. But Theresa May’s Conservative government, like its predecessors, insists on sticking to the nuclear path. The electricity eventually produced at “Hinkley C,” if allowed to open, will be sold at more than double the market value.

The US, Japan and South Korea Get In on the Act

France is not alone on the nuclear salesmanship world stage, however. It joins Japan, the United States and South Korea, whose nuclear projects are fading at home but who are happy to market their wares to countries such as Saudi Arabia, China and India — countries where resistance is likely to be either minimal or suppressed. Anti-nuclear protesters in India, for example, have been met with violence, sometimes fatally, and have been barred from public meetings at gunpoint.

An impetus for this export frenzy could be Russia, which reportedly holds a 60 percent share of the international nuclear power plant market, with contracts for 34 reactors in 13 countries — an estimated total value of $300 billion.

That competition has Japanese Prime Minister Shinzo Abe hurriedly shopping Japanese nuclear reactor designs to volatile places such as Turkey (where Russia already has contracts), even as most of Japan’s reactors remain closed in the aftermath of the Fukushima-Daiichi nuclear accident. Turkey, currently without nuclear power plants, is looking for 4,560 megawatts of nuclear-generated electricity produced at a proposed four-reactor site at Sinop, on the Black Sea, with Mitsubishi slated to be the supplier.

However, the Sinop site lies just off the North Anatolian Fault, where the epicenters of Turkey’s biggest earthquakes in recent decades have been located. It is also an area of natural beauty, but according to Turkish researcher and activist Pinar Demircan, 500,000 trees have already been cut down in the heavily forested area to prepare the site for the nuclear project.

Japanese nuclear companies will also supply parts to India for its domestic nuclear program through the Japan-India civil nuclear agreement, which came into force in July 2017. The deal specifically “seeks to promote full cooperation between the two countries in the development and uses of nuclear energy.” Japanese corporation Hitachi is also actively pursuing new reactors at Wylfa in Wales.

But, as Tom Corben’s insightful December 2017 article in The Diplomat points out, while Japan is using nuclear exports to create and strengthen bilateral relationships and economic opportunities, “Certain agreements, however, arguably risk implicating Tokyo in international proliferation controversies or potential future industrial-environmental disasters, while the long-term financial benefits of nuclear power investments are also uncertain.”

Meanwhile, South Korea’s KEPCO [Korea Electric Power Corporation] has a $20 billion contract to build four of its APR-1400 reactors in the UAE, a project that is close to completion. The project faced a potential setback when newly elected South Korean President Moon Jae-in signaled in June 2017 that his government would cancel new reactor plans, stop construction on the two APR-1400 reactors at Shin Kori 5 and 6 sites, and decline to extend licenses at the country’s 24 currently operating nuclear plants.

The UAE is dependent for startup of its own KEPCO reactors on demonstrable success at South Korea’s identical Shin Kori 3 and 4 units. But while Shin Kori 3 entered commercial service in December 2016, it had become mired in a scandal involving parts provided with fake safety certificates. This, combined with Moon’s nuclear stoppage plans, gave the UAE pause. But by October 2017, after a polling of so-called experts, Moon had reversed the policy to halt construction already in progress, even though his election was won in part due to popular opposition to nuclear energy.

South Korea also recently took over a proposed new nuclear power plant site at Moorside in Cumbria on England’s northwest coast after the bankrupt US giant Westinghouse was forced to pull out. KEPCO will scale back the original three-reactor project to just two of its APR-1400 reactor designs, but nothing about the deal is certain.

On February 27, the Trump administration announced that Energy Secretary Rick Perry would be in London later that week for talks with Saudi officials about a multibillion-dollar nuclear deal for US companies. The US push to sell nuclear power technology to Saudi Arabia may be a last-ditch attempt to keep Westinghouse afloat. The company’s financial collapse called to a halt two AP1000 reactors under construction in South Carolina. Two more — at the Vogtle site in Georgia — are proceeding, but are beset by cost overruns and controversy.

The Westinghouse AP 1000 Vogtle 3 and 4 construction site (at left) is well over budget and years behind schedule.

Westinghouse is also marketing its untested AP1000 reactor design in India for a six-reactor project in the village of Kovvada in Andhra Pradesh on the country’s southeast coastline, where locals vigorously oppose it. Westinghouse officials were in India in February to further promote the Kovvada project, even though the company itself will now only supply, but not build, the plants. It was that construction arm which finished the company financially, causing its parent, Toshiba, to go into free-fall and offload its $18 billion computer chip business to compensate for the nuclear losses.

Meanwhile, the Westinghouse “flagship” AP1000 in China is giving the company even more bruises. In early February, “safety concerns” once again halted fuel loading at Sanmen, the site of what may eventually be the world’s first AP1000 to come online. The reactor was originally supposed to start up in 2014.

The many Westinghouse woes do not sit well with the Trump administration. Eager to celebrate a resuscitation of Westinghouse, the White House may allow a deal with Saudi Arabia that would permit them to enrich their own uranium, even if that means to weapons-grade — a move especially alarming to Iran.

Macron, meanwhile, may have received a warm reception from government officials in India — although not from Jaitapur locals who protested his visit — but the corks may not be popping so loudly when he returns home. On February 22, his government sent in 500 gendarmes to evict 15 protesters occupying the proposed radioactive waste repository site at Bure, in the Champagne region. This action, which included the destruction of protesters’ tree houses and property, was widely condemned by nuclear opponents as heavy-handed and anti-democratic. Days later, when the protesters returned, they were tear-gassed by police. But as French enthusiasm for nuclear energy continues to wane at home, the Macron government may be sensing a need to market the technology abroad with an ever greater sense of urgency.

← Injustice at sea
Not thriving, but failing →