Posted on April 4, 2018 by beyondnuclearinternational

So did many other black Americans. Why did they vanish from the movement?

In 1957, when asked his views on nuclear weapons, Dr. Martin Luther King, Jr. said: “I definitely feel that the development and use of nuclear weapons should be banned. It cannot be disputed that a full-scale nuclear war would be utterly catastrophic. Hundreds and millions of people would be killed outright by the blast and heat, and by the ionizing radiation produced at the instant of the explosion . . . Even countries not directly hit by bombs would suffer through global fall-outs. All of this leads me to say that the principal objective of all nations must be the total abolition of war. War must be finally eliminated or the whole of mankind will be plunged into the abyss of annihilation.”

Today, we remember in particular the life and achievements of King, one of the 20th century’s most resonant proponents of peace. The dark cloud of his assassination forever hangs over us. So, too, does the spectre of nuclear war. This latter drove many black Americans like King to oppose their development and use. One reason, may be surprising. But it forms part of the though-provoking thesis of Vincent J. Intondi’s scholarly but highly readable book, African Americans Against The Bomb.

African Americans, argues Intondi, saw the bombings of Hiroshima and Nagasaki, as inhererently racist. And it was this that helped draw them into the nuclear disarmament movement. As Intondi explains in his introduction, “Black activists’ fear that race played a role in the decision to use atomic bombs only increased when the United States threatened to use nuclear weapons in Korea in the 1950s and in Vietnam a decade later.”

This singling out of non-white enemies for the use or threat of atomic weapons drew African Americans not only into the nuclear abolition movement, Intondi contends, but into a form of social activism that connected many issues of civil and human rights on a global, rather than national scale.

The black anti-nuclear campaign: airbrushed out of history

“Since 1945, black activists had made the case that nuclear weapons, colonialism, and the black freedom struggle were connected”, writes Intondi.

African Americans recognized colonialism “From the United States’ obtaining uranium from the Belgian-controlled Congo to France’s testing a nuclear weapon in the Sahara”, Intondi writes. It was the use and continued testing of the atomic bomb, “that motivated many in the black community to continue to fight for peace and equality as part of a global struggle for human rights.”

Those who joined the struggle against nuclear weapons included King, W.E.B. Du Bois, Paul Robeson, James Baldwin, Marian Anderson and many others. Yet it is rarely their faces that are evoked when there is discussion of the Ban the Bomb marches or, later, the rise of SANE/Freeze.

Perhaps no one better embodied that clear understanding of the link between the struggle for peace and justice and the arms race than Bayard Rustin, posthumously awarded the Presidential Medal of Freedom in 2013 by President Obama.

Yet despite Rustin’s outspoken role for peace and disarmament, the word ‘nuclear’ never appears in his Wikipedia biography. Rustin’s leadership in the anti-nuclear movement, like that of many of his fellow African Americans, has vanished from the history books. But not from Intondi’s.

The debate about whether the US was justified in dropping atomic bombs on Hiroshima and Nagasaki persists today. The most widely accepted — but vehemently challenged — argument in favor is that it was necessary to force the surrender of Japan and thus end World War II.

But the underpinnings of racism are glaringly obvious. Intondi quotes poet Langston Hughes asking the question voiced by many others; why did the United States not drop the atomic bomb on Germany or Italy?

The answer can be found in the appalling and vitriolic anti-Japanese sentiment Intondi cites, whipped up to dehumanize an entire population. This includes the illustrious Time magazine which declared that “The ordinary unreasoning Jap is ignorant. Perhaps he is human. Nothing … indicates it.”

Clearly, these were slurs with which the African American community were all too familiar. It enabled them to empathize with the innocent victims of Hiroshima and Nagasaki, and, more broadly, with those around the world oppressed by colonialism. 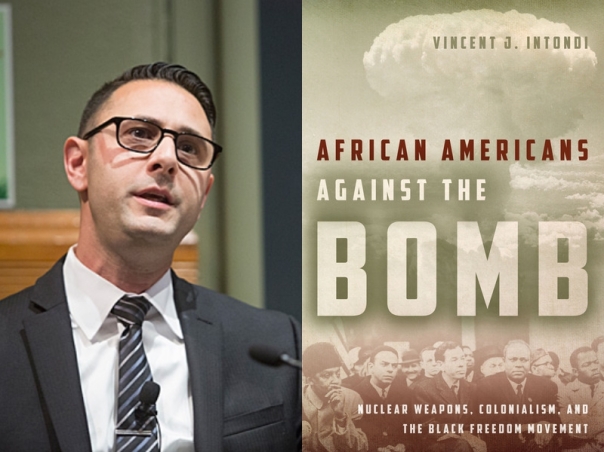 Vincent J. Intondi speaks about his book, “African Americans Against the Bomb.”

Consequently, according to Intondi, the dropping of atomic bombs on Japan was viewed through a very different lens by the African American community than by white America. Du Bois recognized immediately what the legacy of Hiroshima and Nagaski would be. It would lead, he warned, to a corporate conspiracy of profiteering that would impact the working people of the US the most severely.

“Big business wants war to keep your mind off social reform”, Intondi quotes Du Bois as saying at a 1950 Harlem press conference. “It would rather spend your taxes for atom bombs than for schools because in this way it makes more money.”

All we are saying, is give peace a chance

Today, the voices of African Americans like Robeson, Du Bois, Dorothy Height, Dick Gregory and others are no longer leading the nuclear disarmament movement. Today’s nuclear abolition crowd is largely white, progressive and, with the exciting exception of ICAN, almost entirely grey-haired.

Why did they disappear? Many African Americans in the anti-nuclear movement of the 1950s and ’60s were firmly on the Left, some members of, or fellow travelers with, the Communist Party. The McCarthy witch hunts and general Red baiting, forced a retreat on all fronts, including among some African Americans, Intondi suggests.

Some hung on for a while. Twenty years after King’s “I Have a Dream” speech, at an August 1983 anniversary march, the official platform still proclaimed the importance of nuclear disarmament, as Intondi quotes in his book:

“Were he alive today, Dr. King would still be using the ‘unarmed truth’ to warn that we stand at the very precipice of the hell of thermonuclear self-immolation … We must transform the dynamics of the world power struggle from the nuclear arms race to a creative contest to harness man’s genius for the purpose of making peace and prosperity a reality for all … We call upon the American public to turn the arms race into a ‘peace race’ utilizing the existent and evolving movements in the United States as its foundations.”

But the peace was never run. Prosperity did not come for many, especially in the African American community. Anti-nuclear activism did finally persuade President Reagan to change course, but nuclear weapons were not abolished in the US or in any country that already possessed them. Others like Israel, India and Pakistan, developed them.

The notion that nuclear weapons were ‘necessary’, or a ‘deterrent’, despite the protests and all evidence to the contrary, held sway then and continues to do so today.

For the African American community, priorities changed. Although segregation came off the statute books, it persisted. Opportunities for African Americans grew, but not enough, and for too few. Huge swaths of the population continued to languish in ghettoized neglect. There were periodic explosions — the riots of Watts, Newark, Washington — but not enough action to bring the community fully out of poverty and discrimination.

A fundamental grasp of the depths of racism by the non-black community in the US was never achieved. This led to the misunderstanding of meaning and intent behind the Black Lives Matter movement, the absence of that tiny word ‘also’ leading to criticism, amendment and even hostility.

Recognizing the contribution of African Americans

The bombing of Hiroshima and Nagasaki was a decision that could be made because the US government and its propaganda team seared into the collective American psyche the idea that the Japanese people were, as US General Joseph Stilwell said at the time and most vilely, “bowlegged cockroaches”. The US press, as we have seen from the Time quote, were right behind him.

Then the photos began to emerge – of burned children with their skin hanging off; of bodies charred or even vaporized; of the agonizing deaths from radiation sickness. And there was Sadaki Sasaki and the 1,000 origami peace cranes she folded before her death at 12 from leukemia ten years after the bomb was dropped on her hometown of Hiroshima.

Those images galvanized a movement. But they also evoked recognition and empathy among thousands of African Americans who saw the racism for what it was and provided the motivation for their substantial but largely unheralded contribution to the nuclear abolition movement.

To order a copy of African Americans Against The Bomb, click here.