Nuclear companies are just happy to be in there somewhere

Posted on April 8, 2018 by beyondnuclearinternational 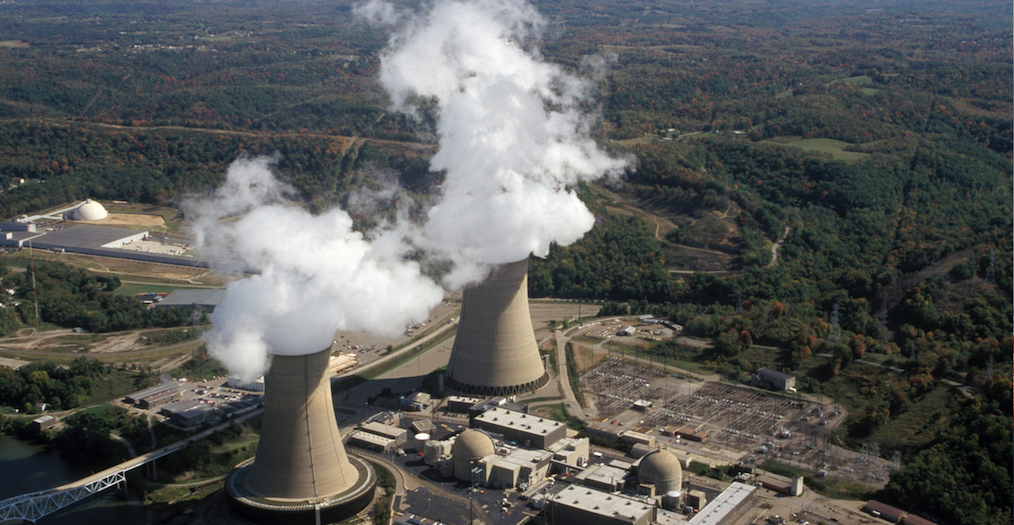 And they’ll gouge the ratepayers to get there

That teeth-jangling noise you can hear are the fingernails of nuclear power corporations scraping across window ledges in a last, desperate attempt to cling on. It’s a lost cause. Nuclear power is falling to its none too premature death. It just won’t go quietly.

Instead, like Steve Martin’s unforgettable character in The Jerk, the mantra for nuclear corporations has become “I’d just be happy to be in there somewhere.”

The only chance for nuclear energy companies to stay relevant, and even alive, is to squeeze ratepayers. It’s their last, selfish recourse to prop up aging, failing and financially free falling nuclear power plants that should have closed years ago (and in fact should never have been built in the first place.)

Consequently, even as we tentatively celebrated First Energy’s just announced early closures of its four nuclear reactors — Davis-Besse (OH), Perry (OH) and two at Beaver Valley (PA, pictured at top) — we knew that something more devious was afoot.

And indeed it was. Just 24 hours after First Energy’s shutdown announcement, its subsidiary, First Energy Solutions (FES) which runs the nuclear plants, was already appealing, cap in hand, to the US Department of Energy for salvation. The shutdowns, it appeared, were conditional. The reactors would close but only “if there are no buyers or remedies found by their respective dates.”

FES quickly followed this with a late-night March 31 Chapter 11 bankruptcy filing. (Parent company, FirstEnergy, is not part of the bankruptcy proceedings.) Then, on April 4, the company’s chief lobbyist reportedly dined with President Trump, just as FES was attempting to score a bailout to pre-empt the shutdowns by claiming the closures would cause a grid emergency, something the grid operator has exposed as nonsense. 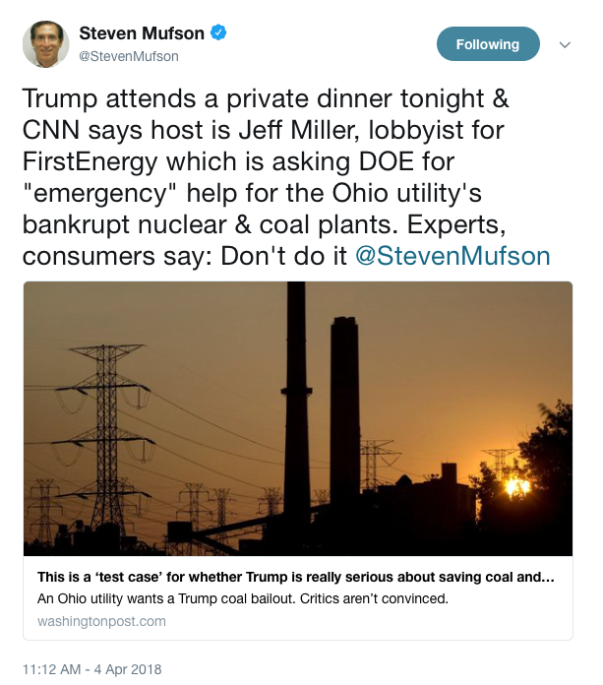 For those wags who hoped Trump was just talking about the DC area code, the president was in fact referring to the DOE’s Federal Power Act section 202(c). This allows the Secretary of Energy, during an “emergency,” to “require by order temporary connections of facilities, and generation, delivery, interchange, or transmission of electricity as the Secretary determines will best meet the emergency and serve the public interest.”

It’s a path well smoothed in advance. FirstEnergy has shelled out around $2 million a year on lobbying over the past seven years. The Nuclear Energy Institute, the industry’s trade group, has typically spent similar amounts in lobbying dollars annually. Exelon, the country’s biggest nuclear corporation, spent a whopping $9 million in 2011 alone and $4.5 million last year. The latter figure is on par with the annual sums dished out by the National Rifle Association, to buy — and own — Congress and the White House.

All of this is considered a mere downpayment, an insurance for the just the kind of situations these entities now face. FES is under assault from the disastrous economics of its own failing industry. The NRA’s recent rhetoric reveals it is running scared from the the unexpected, authentic and dollar-free challenge of youth.

Part of the propaganda FES has put about is that the closure of these plants will create some kind of power supply “emergency.” If the DOE accepts this assertion, it could force the grid operator to secure higher, above-market prices for FirstEnergy’s financially collapsing nuclear plants.

“Nothing we have seen to date indicates that an emergency would result from the generator retirements,” said PJM in a statement. The company added that it “has adequate power supplies and healthy reserves in operation today, and resources are more diverse than they have ever been.” As far as PJM is concerned, there is ample supply, including well after the reactors have closed. The nuclear plants are, in a word, obsolete.

Using the potential job losses as leverage to get subsidies in the form of price hikes was always part of the FES strategy. To achieve this, the company lent its support to a fatally restrictive zoning provision that passed the Ohio legislature in 2014 and that dramatically stifled wind energy growth in the state.

This effectively halted at least $1.6 billion in wind power development which would have created thousands of steady and secure renewable energy jobs, easily surpassing those provided by the company’s nuclear power plants.

Ironically, Ohio, with a shoreline on Lake Erie, is one of the states best suited to on- and offshore wind development. Wind power could meet the state’s energy needs many times over. But instead of leading the way with a booming wind energy economy, Ohio is now one of the most wind restrictive states in the country.

All of which suits FirstEnergy Solutions and its dying nuclear plants very nicely. It remains to be seen whether even Rick Perry’s DOE will cede to the utility’s fake news-based demand and thrust the financial burden of keeping aging and unnecessary nuclear plants running onto the shoulders of ratepayers.

Either way, there is only one winner here. And it isn’t the working people of Ohio and Pennsylvania.

This article first appeared on April 6, 2018 on Counterpunch.