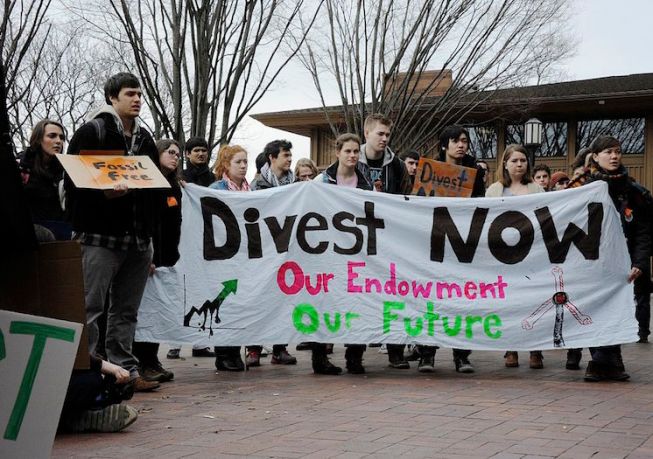 Our convoluted economic web means that our institutions – colleges, businesses, banks, faith centers, and local governments – are often directly and indirectly invested in an array of socially and environmentally unjust activities. Divestment campaigns promote the important work of holding institutions accountable to their values and bringing awareness and concern for these issues to the public gaze.

Nationwide divestment campaigns against tobacco companies in the 1990s highlighted the industry’s efforts to hide the health impacts of smoking and contributed to the passage of a host of new policies and regulations on the tobacco industry.

Over the past few decades, thriving divestment campaigns against the fossil fuel industry, the Israeli occupation of Palestine, the gun industry, the prison industry, and many others have taken root across the globe.

The cornerstone of divestment’s power is not just the successful removal of funds from the targeted industry, institution, or state – but the process of mobilizing and educating people. Over time, this leads to a shift in public consciousness and the stigmatization of institutional and corporate ambivalence.

The Treaty Compliance Campaign embraces divestment as a vital tool for ensuring that the US eventually signs, ratifies and enforces the Nuclear Ban Treaty. We believe that if individuals, schools, faith organizations, businesses, and ultimately cities and states become treaty compliant by divesting from the 26 corporations currently making nuclear weapons, and also commit to not purchase their products until they stop producing nuclear weapons, that we can ultimately pressure them to invest instead in other more socially acceptable activities.

By alerting the companies to the reasons for our divestment and mobilizing our communities to also become treaty compliant, we can build a critical mass of people demanding corporations get out of the nuclear weapons industry.

Smith College students blocking the entrance to College Hall in 1986 as an act of protest urging the Board of Trustees to divest the college’s endowment from South Africa. Smith College archives.

When the education systems, local governments, businesses, and faith centers that are the backbone of our society start saying no to nuclear weapons, it is just a matter of time before the federal government follows suit. Check out our website or contact us to figure out how you and your community can divest from nuclear weapons.

Lydia Wood is a PhD candidate at San Diego State University and UC Santa Barbara. She works full-time on the Treaty Compliance Campaign for Nuclear Ban.US.  Learn more at the Nuclear Ban US website.