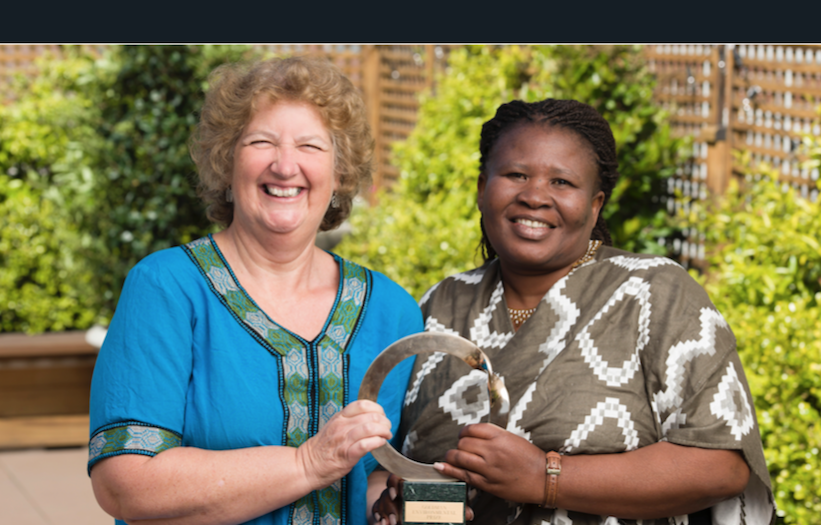 The first thing that South Africans Liz McDaid and Makoma Lekalakala, pictured above and the 2018 winners of the Goldman Environmental Prize for Africa, will tell you is that there were many others who contributed to the victory for which they received the award. They were never — and will never be — alone in their fight.

That victory was a win last year in the South African High Court which ruled that a secret nuclear power deal between Russia and the then Zuma government was unconstitutional. It effectively chased Rosatom, the Russian government-owned nuclear corporation, out of the country. It was the culmination of several years of broad campaigning across many strategies and demographics.

Since the court victory, Zuma has stepped down and Cyril Ramaphosa, who is trying desperately to restore confidence in their shared political affiliation, the ANC, has taken the helm. So far, Ramaphosa has suggested that nuclear energy is not affordable for South Africa. For now, Lekalakala and McDaid remain on the winning side.

The Russian nuclear deal was so closely associated with the disgraced Zuma, explains McDaid, that it is now almost politically essential to oppose it, good news for South Africa’s anti-nuclear campaign.

Lekalakala is the director of Earthlife Africa, primarily an environmental justice movement that has long been involved in stopping nuclear power projects in South Africa. One such was South African electric utility Eskom’s attempt to build a pebble-bed reactor, which was also defeated in a court of law by Earthlife in 2006 and with the same lawyers who also won the recent case. The group successfully challenged the processes around the environmental impact assessment for the PBMR, a reactor technology also fraught with so many technical challenges that it has faded from favor.

McDaid is the climate change coordinator for Southern African Faith Communities’ Environment Institute, more handily known as SAFCEI. McDaid, like Lekalakala, cut her activist teeth in the anti-apartheid movement and is a long-time campaigner against nuclear energy.

South Africa has only one nuclear reactor, at Koeberg just outside Cape Town. But as the only country to voluntarily give up its nuclear weapons program, in 1989, South Africa has been angling to expand its nuclear power program instead. In 2014, those plans inched closer to reality when the government did a behind-closed-doors deal with Russia, signing a $76 billion contract for 9.6 gigawatts of nuclear power that would have involved constructing eight to ten nuclear reactors. 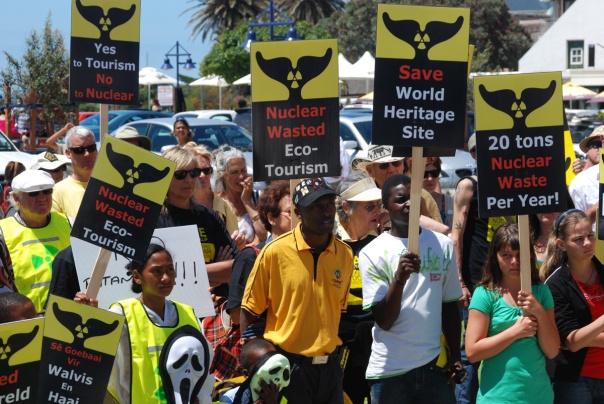 A nuclear power plant targeted for coastal Bantamsklip, an important whale migration route and a biodiversity hotspot, was strongly opposed in South Africa

It was in part the secrecy of the Rosatom deal that ultimately caused its downfall. After building a broad coalition of opponents, Lekalakala and McDaid took the case to court where, on April 26, 2017, appropriately the anniversary of the Chernobyl nuclear power plant accident, they won a landmark legal victory that proclaimed the Russia nuclear deal unconstitutional. The state, the court found, had not followed its own procedures around accountability, transparency, and public participation.

Strategically, the groups chose not to focus the case or the campaign on the merits or detriments of nuclear power. “We campaigned on process, not nuclear versus anything else,” explained McDaid in a recent presentation hosted by Nuclear Information and Resource Service and the US Climate Action Network in Washington, DC. “People can very easily identify that something is corrupt and secret and they haven’t had a chance to have their say.”

The critical issue, say both women, was that of holding your government accountable. “We both worked against the apartheid government and now all those hard won gains in terms of following due process and having rights have been rolled back and ignored,” McDaid said.

There were protests, too, of course, and a nearly two-year vigil outside Parliament in Cape Town. During the 2016 Nuclear-Free Future Award in Johannesburg, Earthlife, the host organization, led a march through downtown loudly protesting the Rosatom deal.

A South African rally, however, is more of a dance, as seen in this clip below of the Jo’burg protest. There may be anger and determination, but there is no reason not to express this through the joyfulness of solidarity.

The campaign drew people in because, as Lekalakala pointed out, South Africa “is already feeling the effects of climate. We have drought. We have food insecurity.” That resonated — along with other challenges like housing shortages — when the astronomical Russian nuclear deal came to light, one that would have placed all the financial liabilities on South Africa.

Cape Town has been experiencing a devastating water shortage, with rationing still in place. One exception, however, is the nearby Koeberg reactor, which must have water for cooling and is drawing it from the already sparse city supply. Such disparity does not go unnoticed and has further entrenched opposition to nuclear power. Of course, as Lekalakala pointed out, the fuss about Cape Town was viewed with cynicism among poorer communities, many of which still lack running water on a routine basis.

“One trillion Rand!” exclaimed Lekalakala naming the price of the Russian nuclear project in South African currency.  People understood, she said, that this money “could be diverted into building people’s houses, into improving health care.” These values were integral to the movement’s Campaign for a Just Energy Future which celebrated the Russian victory but continues its advocacy via its Facebook page.

The women also understood that a massive nuclear power project in South Africa would have detrimental effects well beyond South Africa’s borders.

“The 8-10 nuclear power plants on the table would have had huge impacts for uranium mining in the rest of Africa,” pointed out McDaid. “Now that the deal is no more we want to keep up the pressure throughout the region and even into East Africa as well because Rosatom is actively trying to sign deals with Kenya, Zambia and Zimbabwe.”

For more information, please visit the websites of Earthlife Africa and SAFCEI.

← Leave uranium in the ground
A whole island once, now become tomb →