“What’s at stake here is life for the whole planet”

Posted on May 20, 2018 by beyondnuclearinternational 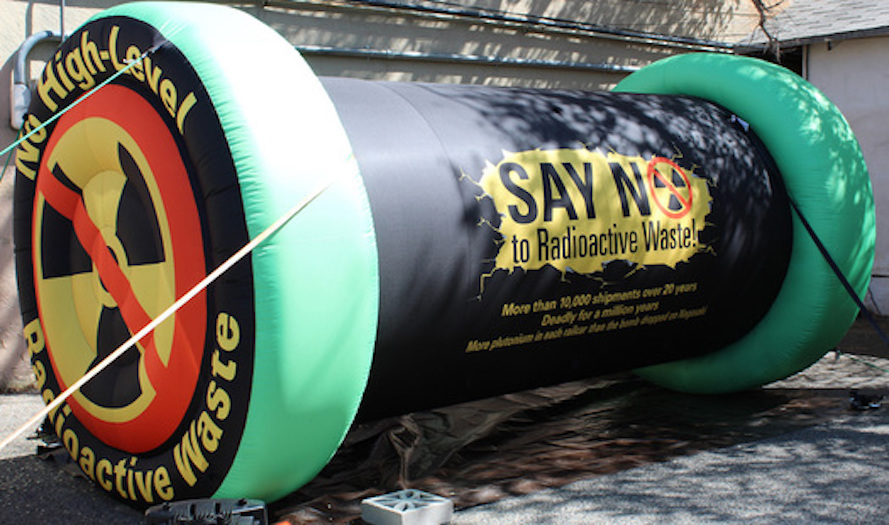 An inflatable “mock” radioactive waste cask (pictured above in a photo by Don Hancock) has been touring New Mexico to draw attention — and opposition — to the proposed “Consolidated Interim Storage” radioactive waste dump slated for 1,000 acres of land approximately halfway between the cities of Carlsbad and Hobbs, N.M.

In this short video by Christina Rodriguez of New Mexico News Port, Laroza describes his project and the many ways people have been negatively impacted by nuclear colonialism across the world.

Laroza, who describes himself as a student in “nuclear New Mexico,” talks about the history and impacts of nuclear disasters associated with uranium mining, atomic testing and our “carelessness with such a powerful entity such as nuclear energy.” His inspiration came from a class he has been taking at the university.

Laroza’s clay tiles engage with the local legacy of nuclearism and the potential of nuclear winter. The panel on the left is titled “Unraveling the Sacred Web,” and the panel on the right includes “The Original Instructions.” Photo: Christina Rodriguez / NM News Port

Through his art he said he wanted to “give people a visual representation for what I am feeling with this class because there have been a lot of hard things to think about, not only in our present and in our past but in our future as well.

“We read an article by Carl Sagan in which he said that half of our nuclear arsenal exploded would be a 5,000 megaton yield and the results of that were just haunting to me,” Laroza said. “A billion deaths right away. Another billion deaths from radioactive fallout.”

And he added: “So what’s at stake here is life for humans and life for the whole planet.”

← The pro-nuclear lobby goes bananas
Water is life. Will the Supreme Court disagree? →