A passion for painting and planet Earth

Posted on October 29, 2018 by beyondnuclearinternational The journey of an artist’s work involves a variety of pathways. Sometimes these lead to paintings inspired by serious events that involve the entirety of our planet. That was to be my destination as an artist, but my journey began with landscapes, on the top floor of my strict Catholic school, where, on Saturday mornings, we were allowed to paint scenes from photographs.

That sojourn in the tranquility and beauty of nature was abruptly turned upside down after the 2000 election of George W. Bush.

The election night itself, with its bizarre turn of events, set me painting furiously, an anger that exploded into a flame-filled oil painting in response to the 9/11 attacks almost a year later. Then came the war in Iraq and I found myself creating a series of watercolors of soldiers, bombings, the women of Iraq and of death. After all, the Iraq war was about oil. It had become increasingly obvious to me how burning oil and coal, non-renewable resources, contribute to greenhouse gases and the warming of our planet.

Leaping Flame. I use the circle to represent the beginning and the ending. Coal has been formed from vegetation that has been consolidated between other rock strata and changed by the huge amount of pressure and heat for millions of years. (Acrylic on gessoed paper). 2014

I have always been a world traveler. Yet now my travels were taking on new meaning. Vacations and adventures were starting to have a darker side. Something terrible was happening to our planet. And we were the cause of it. 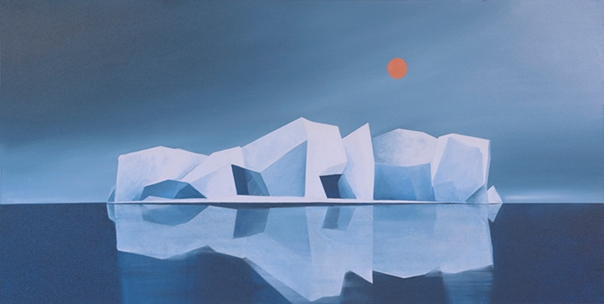 Stillness. The absolute majesty of the ice in the cold water is what appealed to me while painting the piece. I put a sun in the painting at the end. (Oil on canvas). 2011

This awakening changed my experience of travel forever. In 2008, when I visited Iceland — a wild and magical place — I was sobered by the firsthand sight of melting glaciers, inspiring a new series of paintings depicting melting ice. Climate change became an inescapable presence on future journeys, as did our desecration of the precious planet we call home.

During a visit to Thailand and Vietnam the following year, I witnessed the mounds of plastic trash on the beaches and learned about the invasion of plastic garbage into the oceans. I began a new series of paintings: plastic pollution. I was stunned when I read a few years later in National Geographic, that, as of 2015, “more than 6.9 billion tons of plastic waste had been generated. Around 9 percent of that was recycled, 12 percent was incinerated, and 79 percent accumulated in landfills or environment.”

After that, no trip could escape the invasion of human impact on our environment. Relaxing in a café adjacent to beautiful Lake Pont d’Oreille, in Sandpoint, Idaho, I witnessed a passing train with open cars filled to their brim with uncovered piles of coal. I counted the cars — 126 of them! I knew where they were going—to the ports in the northwest to be loaded and then transported to Asia.

Burning Coal Train. One of the worries in the transporting of coal is fire and spillage. (Acrylic on canvas). 2015

At that time I had already been painting a series of coal pictures and had read about the dangers of toxic coal dust coming from the trains. I had also learned about fires caused by derailments of train cars filled with fracking oil. A major concern was the passage of these trains through pristine northwest forests and lakes like the one in Sandpoint.  An additional worry was the fact that I had children living in Sandpoint and these trains—which travel day and night through the town — were hazards.

Another daughter lives in Floyd, Virginia, a town in Appalachia that borders coal mining country. One recent Thanksgiving during a visit, I asked the woman clearing the breakfast tables at the hotel what she was going to do that day.  She said she was spending the day with her family in Bud, West Virginia —a two-hour drive from Floyd.  Since I had never heard about Bud, a town of about 500 people, I Googled the name and found out that for some of West Virginia’s former coal-mining towns, such as Bud, clean free-flowing tap water has not been a reality for months or years. For towns that during the early- to mid-1900s were bustling with coal workers, resources and money are now much smaller and poorer and face substantial obstacles to upgrading an infrastructure that hasn’t been addressed in years. 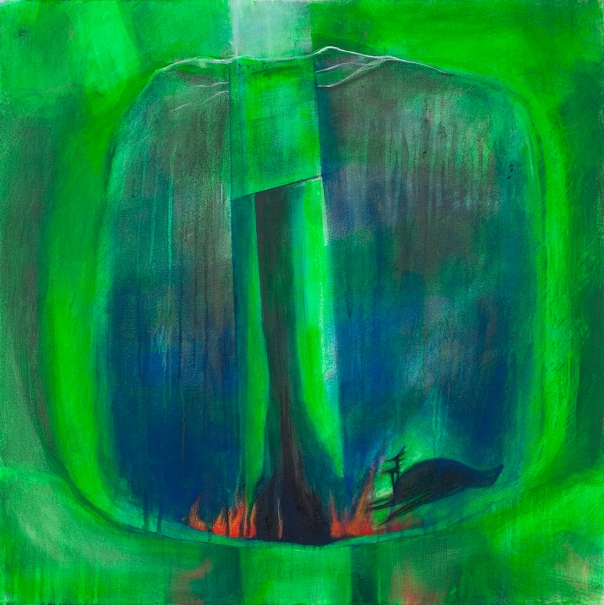 The “toxifying” effect of fossil fuels on our land and air eventually infiltrated my own psyche ultimately making me feel overwhelmed and sad.  I had to stop painting about coal pollution, ice melting, war scarring.  I needed a break and a return to the pastoral beauty that brings such peace. But Fukushima changed all that.

I did not react immediately. It was not until 2016, when I suffered a serious accident that would leave me in bed for four months wondering how to occupy my time, that I turned my attention to Japan’s nuclear disaster. I knew nothing about nuclear power but the triple meltdowns at Fukushima Daichi and the subsequent dispersal of radioactivity into our air and water raised a fear in me. I began studying nuclear energy and learning as much as I could. At the same time, a friend fortuitously gave me a canvas and tabletop easel and soon I could wheel over to a table and begin doing art. 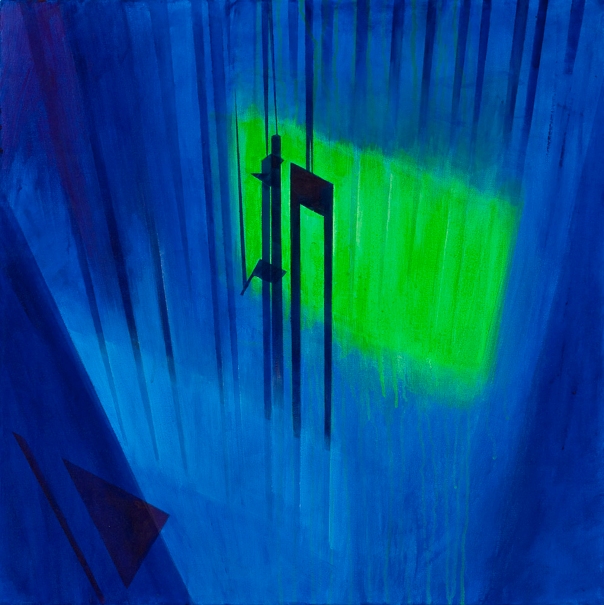 However, where to begin? I had read about the very serious radioactive fallout and displacement of people from the Fukushima Daichi meltdown and that seemed a good place to start.  My first approach was a small drawing of a few of the one-ton black plastic bags filled with radioactive soil accumulated during “cleanup” around the plants. One work showed a dead bird inside the bag; another represented tears reflecting the sorrow suffered by displaced Japanese farmers due to the large amounts of radioactivity in the area; and another of a robot working around these bags.

I moved on to recreating fuel rods—bringing to mind the very dangerous situation with the melted fuel rods in the plants in Fukushima. My last piece, incorporating fluorescent paints, depicted a bleak landscape with one person standing forlornly on a hill.

Ultimately I had to pull away from doing this work because the more I delved into the very serious problems associated with the topic, such as the absence of solutions to nuclear waste disposal; the increasing numbers of illnesses surrounding abandoned uranium mines; the earlier nuclear accidents at Church Rock; Three Mile Island and Chernobyl—I felt dispirited. I was becoming depleted and overwhelmed with the known—yet still promoted—dangers associated with nuclear power plants, nuclear fuel and potential nuclear war.

As a result, I returned to nature paintings once again and I decided to focus on the beauty found in our national parks. This direction in my work did not last long. Land that is sacred to Native American tribes, along with our beloved national parks, are now threatened with new uranium mines. As a result, I felt the call again—but this time to do a series highlighting rocks—uranium-containing rocks, the fuel for nuclear power!

In the process of creating these works I unearth my concerns about our plundering and destruction of our planet along with the fouling of the air and water.  When I am painting I actually feel a deep connection with the Earth. Each art piece tells a story which unfolds as I work. The paint seems begins to speak for itself. I try to stay open by listening to these subconscious leads.

A wish I have is that by using my artistic voice I can bring some attention to the importance for everyone to employ whatever talents they have to help deter the runaway destruction of our life-sustaining planet.

Mary Lou Dauray is an environmental artist living and working in Sausalito, CA. You can see more of her work on her website and blog and on the Manhattan Arts International website.

One Comment on “A passion for painting and planet Earth”