Posted on December 9, 2018 by beyondnuclearinternational 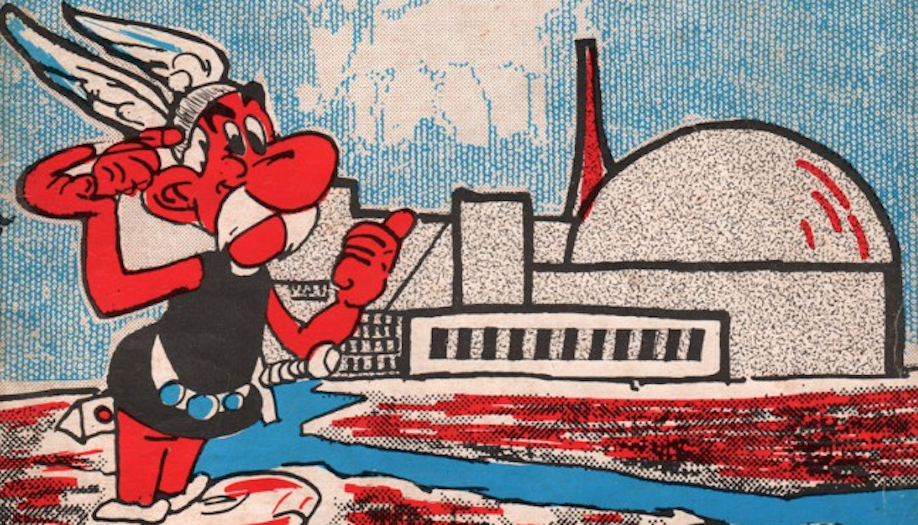 It was an audacious piece of bootlegging that began in Austria and then spread like wildfire across Europe. Someone in the Austrian anti-nuclear movement decided to recreate the much beloved Asterix character in an anti-nuclear tale. Through cut-and-paste, an all new Asterix book was born — Asterix und das Atomkraftwerk (Asterix and nuclear power). It was created to coincide with the ultimately successful campaign against the proposed Zwentendorf nuclear power plant in Austria.

For those of us who grew up in Europe, the Asterix books — about the little ancient Gaul and his stone-hauling sidekick, Obelix — were a childhood fixture. Full of whimsy and humor, they were written in French by Rene Goscinny and illustrated by Albert Uderzo. The plots largely centered around Asterix and his fellow villagers defending themselves against the Romans. But they also ventured forth, including to ancient Britain, where Asterix mocks the national obsession with drinking tea by calling it “eau chaude”.

By 1978, when the first bootlegged anti-nuclear Asterix book appeared, Goscinny had died, but Uderzo filed numerous lawsuits and was eventually able to block distribution. Before then, however, the cut-and-paste idea had taken off, and numerous books had appeared, with at least 20 versions in German as well as in French, Dutch and in several Spanish dialects including Basque.

Asterix and Nuclear Power replicated the anti-Roman theme, this time with Julius Caesar planning to build a nuclear power plant in the village of Gauls inhabited by Asterix and his friends.

As researched and documented by Professor Dirk Spennemann, of Charles Sturt University in Australia, the story narrative is as follows:

“The village, which operates as a  collective,  is  declared  a  construction  site  which  causes  the  inhabitants  to  plan resistance.  Initial  calls  for  physical  responses  ‘Wo  Unrecht  zu  Recht  wird,  wird Widerstand  zur  Pflicht’  (where  injustice  becomes  expressed  as  law, resistance  becomes mandatory) are rejected as premature, but eventually became a necessity in the face of an attempt by Roman troops to clear the site. An attempt to settle the matter in a session of an  administrative  court  deciding  on  the  construction  permit,  rather  than  to  resort  to radical  actions  as  advocated  by  some,  fails  due  to  biased  judges—despite  a  passionate plea  by  the  protagonist.

The famous Obelix and his rock, this time carrying the nuclear burden.

“Subsequent  acts  of  civil defiance,  such  as  disrupting  the surveying of the site, were interpreted by the authorities as acts of terrorism, leading to an escalation. When the Gaul community induces the workers at the construction site to strike, the authorities move to clear the village by force. The first attempt fails, leading to nationwide declarations of solidarity.

Asterix and nuclear power in French and Spanish

“The narrative adds in a sequence, pillorying the lack of meaningful roles for the women in the Asterix volumes: the women of the village assert  their  position  in  what  is  a  partially  chauvinistic  community. Following  a  mixed-gender  final  battle,  defeating  the  powers  of  the  state,  Caesar  is  forced  to abandon  his plans. The  narrative  ends  on  the  note  that  while  the  nuclear power  plant  could  be prevented, Caesar and his cronies would keep developing new plans, and the fight would continue.”

Part of the anti-nuclear Asterix exhibition at the 2018 Salzburg Nuclear-Free Future Awards.

It was fitting then that in 2018 the Asterix anti-nuclear books returned once more to Austria. Heinz Stockinger, a long-time Austrian anti-nuclear activist with his organization, PLAGE, and one of the organizers of the Nuclear-Free Future Awards in his hometown of Salzburg, organized a poster exhibition there of Asterix und das Atomkraftwerk.

The books are now mainly archived at the Amsterdam, Netherlands-based Laka Foundation which catalogues anti-nuclear magazines and other publications.