Posted on February 8, 2019 by beyondnuclearinternational

To be clear, there is no “the” in the Green New Deal. It’s a concept that is yet to become an actual bill here in Washington, DC, and the term has been appropriated — and misappropriated — by a number of different entities, each of which defined the Deal somewhat differently.

This continues to cause consternation among some in the anti-nuclear movement who feared at the outset that what might end up going to Capitol Hill would include at least vague references to “clean energy,” often code for nuclear power, if not overt demands that nuclear be included.

That confusion hasn’t entirely gone away.

A non-binding Green New Deal Resolution, was introduced on February 7 by the dynamic new Democratic Congresswoman from New York, Alexandria Ocasio-Cortez in the US House of Representatives, and by Senator Ed Markey (D-Mass.,) in the Senate. News outlets covering the rollout began to report that, in a Green New Deal (GND) fact sheet FAQ provided by Ocasio-Cortez’s office on her website, nuclear power was specifically referred to as a non-starter. Posted to the National Public Radio website, the fact sheet stated:

“The Green New Deal will not include investing in new nuclear power plants and will transition away from nuclear to renewable power sources only.”

The quote was picked up by Bloomberg as well. But then Ocasio-Cortez’s website posted a redacted version, with no mention of nuclear power. And then the fact sheet disappeared altogether. 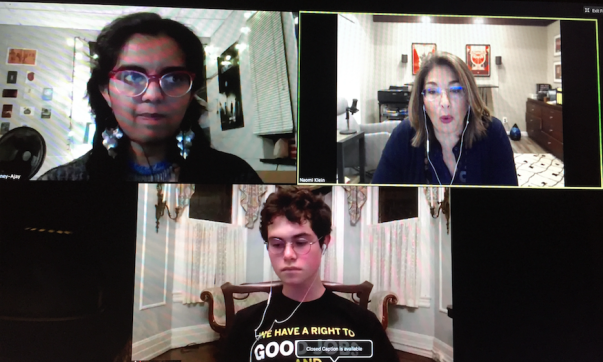 Leaders of the Sunrise Movement invited author Naomi Klein to their webinar who told the activists “to make them do it” when asking Members of Congress to support the Green New Deal.

This spurred a series of articles questioning the apparent blunder. Needless to say, the nuclear lobby jumped right in claiming that of course nuclear power should be in the GND. Senator Markey’s office tried to walk it back, according to EE News, and said that at this stage the resolution was “technology neutral”.

The battle for the Green New Deal will doubtless be hard fought and we will find out in the weeks and months to come exactly where AOC — as Ocasio-Cortez is known — and her allies, come down on nuclear power. Beyond Nuclear will do all it can to help GND advocates hold the line against what promises to be intense and sustained pressure by the nuclear industry and its allies in Congress, most notably from New Jersey senator, and Democratic candidate for president, Cory Booker.

Meanwhile, the resolution does lay out a set of aspirations that achieve “clean air and water; climate and community resiliency; healthy food; access to nature; and a sustainable environment” not just by 2030 but “for generations to come.”  And it does use those ambiguous code words when it says the plan is about “meeting 100 percent of the power demand in the United States through clean, renewable, and zero-emission energy sources.”  That caused some pushback from environmental groups.

“If this resolution is going to create a Green New Deal, then it actually has to be green,” said Nuclear Information and Resource Service in a press release. “That means phasing out fossil fuels, nuclear power, and other polluting energy sources that drive climate change, poison our environment, and endanger our communities. Policymakers in the U.S. have made a tragic mistake for years, by pretending we can clean up the environment and solve the climate crisis without eliminating the causes of those problems: dirty energy sources and polluting industries.”

Friends of the Earth President Erich Pica told EE News the Green New Deal is “a strong vision for the future, stuck in the politics of today.”

The resolution is, however, far more than just a straightforward energy plan. It asks “to promote justice and equity by stopping current, preventing future, and repairing historic oppression of indigenous communities, communities of color, migrant communities, deindustrialized communities, depopulated rural communities, the poor, low-income workers, women, the elderly, the unhoused, people with disabilities, and youth (referred to in this resolution as ‘frontline and vulnerable communities’)”.

It’s a big bite, but one that doubtless helped galvanize and mobilize a new army of young people who care deeply not only about the existential threat to their future if climate change continues to be unaddressed, but also to current injustices in many disenfranchised communities.

These energetic and well-organized youth have gathered under the umbrella of the new Sunrise Movement. They held their own “watch party” on February 5 to discuss the forthcoming “dropping” of the Green New Deal resolution on Capitol Hill and to lay out their game plan. They are running their climate campaign under the hashtag #ChangeTheDebate. 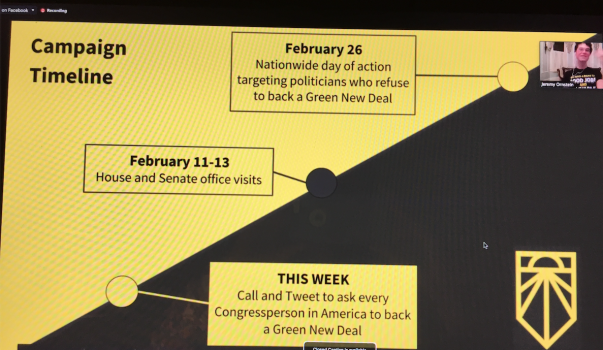 The Sunrise Movement has a plan of action to support the Green New Deal, including February 26 sit-ins in offices of Members of Congress unwilling to support it.

They also know there is going to be pushback. In a statement on February 7, Sunrise leaders said: “There are powerful forces in Washington trying to make this idea disappear. They say that we can’t afford it — as if saving our homes from fires and floods is too much to ask. They say it’s a naive dream — as if securing good jobs and a livable future is too much to ask for.”

On February 26, Sunrise activists are planning to occupy the offices of Congress members who fail to endorse the GND. To them, now is the only time to ensure that their future is not ripped away from them by inaction and by legislators complicit in keeping the fossil fuel industries alive.

During their watch party webinar, the Sunrise Movement invited author Naomi Klein to join them. After thanking them for having a guest on who is more than twice the age of the two Sunrise hosts, she reminded them of an FDR remark when the original New Deal was formed and he told advocates, “now make me do it.” That’s exactly what the Sunrise Movement plans to attempt, because, as Klein pointed out, “the alternative is unthinkable.”

This week, Sunrise will be lobbying on Capitol Hill. On February 8, Beyond Nuclear conducted a pre-planned Hill Drop, serendipitously on the day the brouhaha about nuclear power and the GND broke. We provided the first of this one-two punch approach by delivering our booklet — Climate change and why nuclear power can’t fix it — along with a “cheat sheet” to around 100 members of the House of Representatives. We decided to target all new incoming Representatives, all incumbents who had signed on to the Sunrise Movement’s pledge to support the Green New Deal, and members of the Democratic Select Committee on the Climate Crisis, a more moderate approach selected by Nancy Pelosi (D-Ca.,) and objected to by Sunrise and others.

We also stopped by to talk to staffers in Ocasio-Cortez’s office but no new light could yet be shed on why they changed their fact sheet. One theory floating in the press and among green groups was that it was the result of pressure from unions.

The GND is a bold, progressive and far-thinking vision. It’s about time, or possibly even too late. Cautious conservatism, along with a good deal of blinkered intransigence and politicians beholden to polluters, has gotten us in this mess. We have little time to get out of it, leaving no room for business as usual. It makes sense to support the energy the GND has brought to the debate, and to ensure that the now underway maneuvering by the nuclear lobby to try to shoehorn nuclear power into the GND doesn’t happen.

We encourage you to read the Green New Deal Resolution and to urge your own senators and representative to support it while keeping nuclear power out of it. We will need to turn our attention to a few problematic senators, including Booker and Sheldon Whitehouse (D-RI), both of whom remain pro-nuclear evangelists. Those are the challenges in the months to come. But for now, there is new energy in Washington and it is most decidedly green.

Opinions expressed in this column are those of its author and do not necessarily reflect official policy positions of Beyond Nuclear.

Headline photo of Sunrise Movement webinar graphic outlining what the Green New Deal will do.

← A planet worth saving
A return to Greenham Common? →

4 Comments on “The Green New Deal goes to Washington”