The uranium map in our bodies

Posted on February 17, 2019 by beyondnuclearinternational

Uranium is radioactive. Humans have been digging uranium out of the earth worldwide for over a century, using it in everything from pottery glaze to atomic bomb production. While health impacts of uranium and its decay products were at first unknown, by the time of the Cold War atomic arsenal buildup, obvious health impacts (lung cancer, for instance, had become associated with uranium mining as early as the 1930s) were ignored in favor of nuclear warhead production. Uranium mines and mills spread across the US.

In the Western US, as in most of the rest of the world, the miners and people living near these facilities were largely indigenous. Not only was the health of workers impacted, but because uranium industrial processes left radioactive contamination in soil and water, people living in the area also suffered health effects. Uranium and decay products still litter these landscapes, posing a continuing danger, particularly when inhaled or ingested

While these radioisotopes occur naturally, they are artificially available due to industrial processing.  Although mining for uranium is the most obvious source, gold and other mine processes can also release these materials. Mine sites and surrounding areas pose the greatest danger of exposure to uranium and all of its decay products

Additional sites that could pose a danger from individual decay products include thorium waste disposal sites and factories that used radium paint for commercial and military items such as watch and airplane dials. These sites dot the North American landscape and although a number of these facilities have been cleaned up as part of the Superfund program, for some, monitoring is ongoing. Radon gas can leach out from the ground in many places, not just from mines, and become trapped in buildings. In this instance, however, radon can be easily, safely removed by simple technology as recommended by the US Environmental Protection Agency (EPA), posing essentially no danger.

While all exposed are at risk, radiation poses a particular danger to women, children and pregnancy. Pregnancy is a unique concern, as the impacts are not accounted for in current radiation exposure standards.

Uranium decays to a number of radioactive isotopes. In this article, we review the impact of uranium and five of its decay products that are the most impactful to health: thorium, radium, radon gas, polonium and radioactive lead. We examine where they travel in the human body, using images representing pregnancy. Although the EPA has some exposure standards for these isotopes, it has not classified radium, radon or uranium for carcinogenicity. 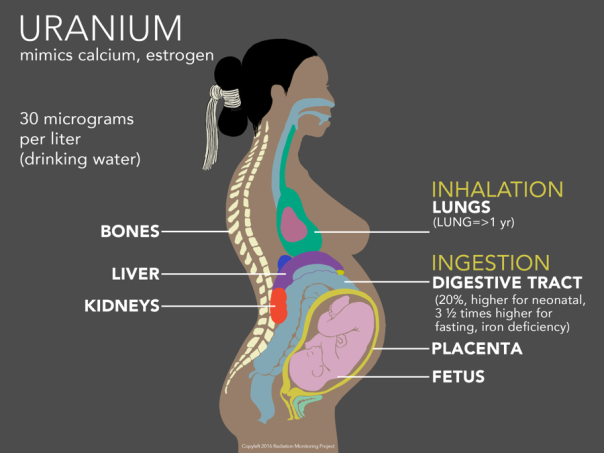 URANIUM mimics the mineral calcium and can enter your body by inhalation or ingestion. Replacing healthy, non-radioactive calcium with radioactive uranium can cause a host of subtle and not so subtle health impacts. There is also evidence that the element uranium mimics the essential hormone estrogen. If you inhale uranium into the lung, it can take years for it to leave the lung and be absorbed into the rest of your body. When it leaves the lung, it goes mostly to bone with some traveling to the kidneys and liver. Ingested uranium will end up in the same organs and tissues, but can be absorbed faster in the neonatal gastrointestinal tract. Fasting and iron deficiency will increase uranium absorption rates.

In the body, uranium can cause kidney damage, bone diseases, and developmental problems. Research indicates that even at levels below the EPA’s allowed limits in water, uranium can cause negative reproductive health impacts including decreased fertility, reduction in testosterone, decreased fetal body weight and growth weight and ovarian failure in offspring, and smaller placentas. Incidence of gonadal cancer in New Mexico Native American children and teenagers is eight-fold greater than that in non-Native American individuals. 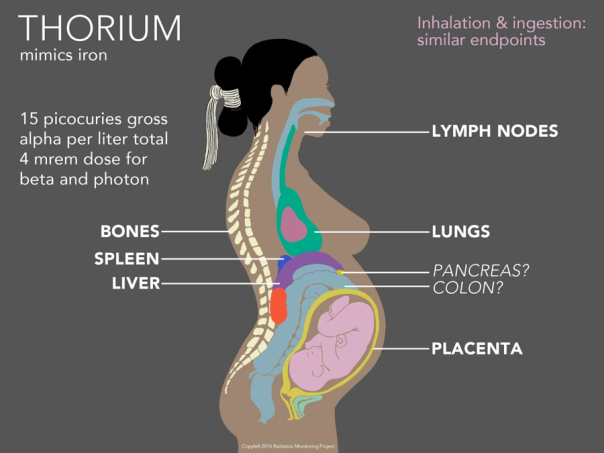 THORIUM collects in the same places in the body whether inhaled or ingested. Thorium mimics the mineral iron, which is necessary for healthy bones and blood. Target organs include the lungs, lymph nodes, bones, liver and spleen.

Residents in the vicinity of a thorium waste disposal site in New Jersey have increases in birth defects and liver disease, although specific tests for body contamination have not been conducted.

Even small amounts of thorium in the placenta increase its weight. 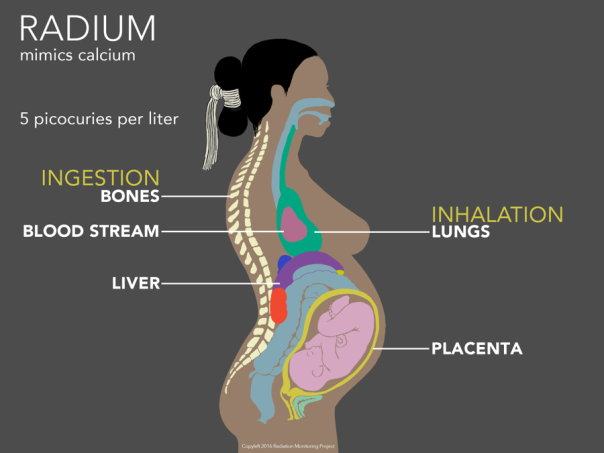 RADIUM, like uranium, mimics the necessary mineral calcium and crosses the placenta in the same ratio as in the mother’s blood.

Because of its similarity to calcium, ingested radium lodges in bone, causing rapid changes in bone structure, red blood cell formation (hematopoiesis) and can cause bone sarcomas. Through the burning of fossil fuels, we can inhale radium into the lungs. From there, it gradually enters the bloodstream. Chronic exposure to radium in humans by inhalation has resulted in a decrease of white blood cells (acute leukopenia). Oral exposure has resulted in anemia, necrosis of the jaw, abscess of the brain, and terminal bronchopneumonia. No information is available on the developmental or reproductive effects of radium in humans or animals. 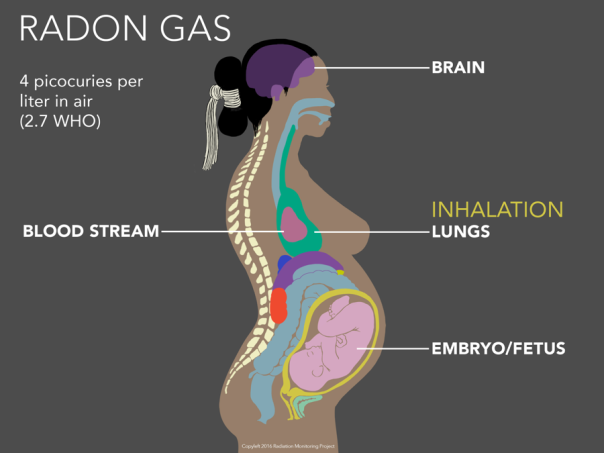 RADON GAS is a radioactive gas that itself doesn’t accumulate in organs, but its decay products can. When it is inhaled, the dose from radon is given mainly to the lung. Radon can travel to the brain where its decay products can irradiate brain tissue. It can pass through the placenta irradiating the developing embryo or fetus.

Radon is thought to be the second major cause of lung cancer after smoking, responsible for fifteen thousand to twenty two thousand cancer deaths per year in the US alone.

When radon travels to the brain, its decay products can cause Alzheimer’s disease and Parkinson’s disease. Some research indicates that radon causes multiple sclerosis. Chronic exposure has resulted in respiratory effects including chronic lung disease, pneumonia, fibrosis of the lung, and decreased lung function. 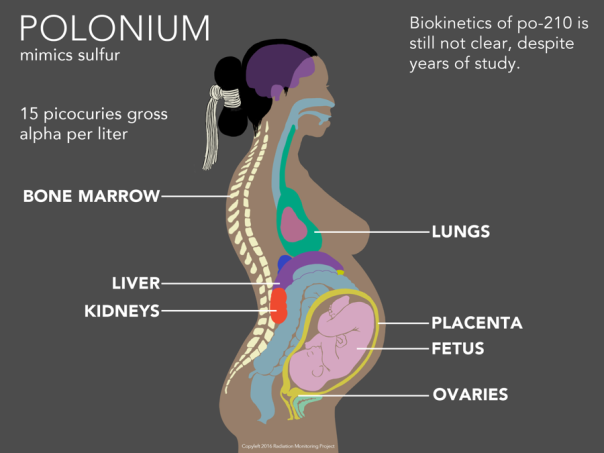 POLONIUM’S movement within our bodies has been studied extensively but despite this, we still don’t know how to interpret the data correctly for a number of reasons. Much of the important biological and toxicological research on polonium is more than four decades old.

Polonium can be inhaled and ingested, collecting in the liver, kidneys, bone marrow and gonads, particularly the radiosensitive ovaries. Polonium also accumulates in the yolk sac of the embryo and in the fetal and placental tissues.

Polonium is toxic because of its radioactivity rather than its chemical properties. Low-level exposure to polonium may have subtle, long-term biological effects because of its affinity for reproductive and embryonic and fetal tissues. Polonium can damage the placenta. Little is specifically known about the effects of polonium exposure to the embryo and fetus, but exposure could lead to subfertility and miscarriage. 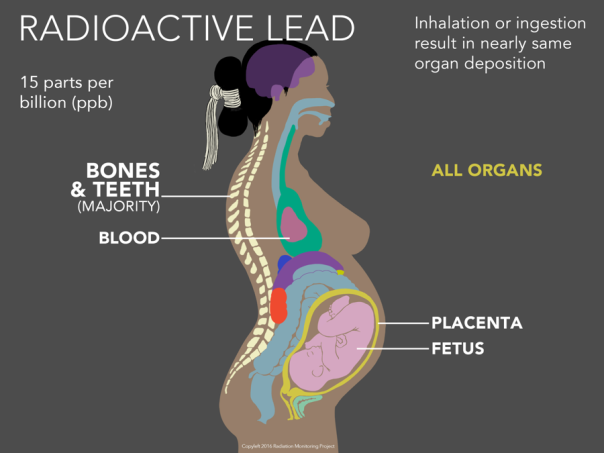 RADIOACTIVE LEAD can do damage both from its radioactive and its chemical properties. The majority of lead collects in bones and teeth. The rest collects in all organs of the body. Lead collects in the placenta and crosses into the developing embryo or fetus.

A high exposure to lead can lead to poisoning. Symptoms include abdominal pain, constipation, fatigue, headaches, irritability, loss of appetite, memory loss, pain or tingling in the hands or feet, and weakness.

We would like to recognize and thank Radiation Monitoring Project for the images in this article. RMP hosts workshops on understanding and monitoring radioactive contamination in the environment by purchasing and distributing radiation detectors to contaminated and frontline communities in the US. RMP is a collaboration between Diné No Nukes, Nuclear Energy Information Service & Sloths Against Nuclear State. Download this article with citations and end notes here.

4 Comments on “The uranium map in our bodies”