Posted on March 24, 2019 by beyondnuclearinternational

Residents around Three Mile Island were exposed to much more radiation from the nuclear disaster than was claimed by officials, a fact that was kept from researchers and the public for years.

Residents at the time had questions about health risks but the fund established to pay for public health research related to the disaster was under a research gag order issued by a court. (Photo: Child Aloft by Robert Del Tredici)

After the Three Mile Island reactor core melted and radioactivity was released to the surrounding population, researchers were not allowed to investigate health impacts of higher doses because the TMI Public Health Fund, established to pay for public health research related to the disaster, was under a research gag order issued by a court. If a researcher wanted to conduct a study using money from this Fund, they had to obey two main parameters set forth by Federal Judge Sylvia Rambo, who was in charge of the Fund.*

Data from radiation monitors from the time were unreliable. The Kemeny Commission concluded “An exceptional percentage (well over half) of health physics and monitoring instruments were not functional at the time of the accident . . .” (from Beyea) Without properly functioning monitoring equipment, dose reconstruction —  the method used to figure out how much radiation people were exposed to —  is at best unreliable, at worst, deceptive.

Biological data show some residents’ exposures were much higher — 60–90 rads — than officials or industry admitted at the time. To arrive at these doses, researchers (see the Wing study, below) used meteorological data to establish where the radiation plumes traveled that were released from TMI. Researchers then drew blood from people in these plume pathways who complained of symptoms associated with higher radiation exposure: vomiting, diarrhea, skin reddening (erythema). Using a chromosome test initially established in the 1960s and honed during examination of Chernobyl liquidators, researchers determined that the public in these plumes received 600-900 milligrays of radiation exposure — thousands of times higher than annual natural background doses; and very much higher than research paid for by the Fund could ever have assessed. Where mechanical dosimeters failed, residents’ blood did not. 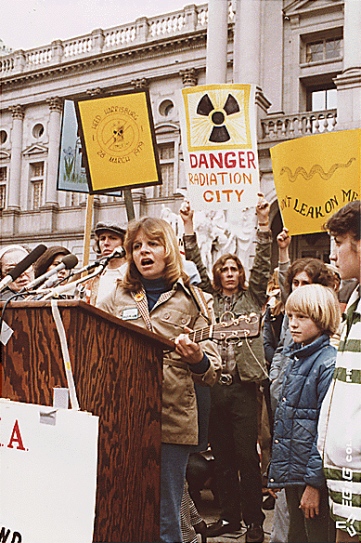 Increases of disease with no cause

Studies conducted by three universities (Columbia, Pittsburgh, North Carolina Chapel Hill) on the impacts of the Three Mile Island disaster show breast, lung, leukemia and general cancer increases, some associated with proximity to the reactors, some in the pathways of the radioactive plumes. However, because of the proscriptive court order governing the TMI Public Health Fund, the two studies that were funded by it (Hatch, et al. from Columbia and Talbott, et al. from Pittsburgh) were unable to associate the disease increases in their studies to radiation exposure. These two investigators were forced to conclude “Radiation emissions, as modeled mathematically, did not account for the observed increase.” (emphasis added) Their compromised study conclusions help to prop up the continuing mirage that TMI did not damage health.

Only the research paper by Wing, et al., University of North Carolina Chapel Hill, was able to associate the cancer increases of lung and leukemia to radiation from Three Mile Island. These researchers had obtained independent funding, allowing them to not only investigate health outcomes, but to correlate them with radiation exposure, rather than rely on court-ordered restraints and industry-collected data. Lending further credibility to their research, Wing et al., examined bioindicators in the blood of residents. (See above).

Health studies need to focus on health outcomes, not dose

As demonstrated by the TMI Health Fund debacle, the starting point for any health study should NOT have been an assumption of dose, but an examination of disease increases in the surrounding community after TMI’s radiation releases. Assumptions, codified in the Fund, that doses were too low to cause health impacts were proved wrong by blood examinations. Yet, Judge Rambo decided, against this blood evidence, that higher doses from TMI were not worthy of study because they didn’t happen. This placed the researchers taking Fund money in a position of compromising their scientific integrity, and allowed the TMI Public Health Fund to serve as an instrument of obfuscation, rather than information.

Current research has found that thyroid cancers in members of the TMI community carry a biological mark specific to radiation exposure, are more aggressive and appear earlier, than thyroid cancers outside of the TMI community. Although research is ongoing, these studies reveal that radiation from TMI may be implicated in thyroid disease – a correlation never admitted to by officials or industry.

Compromised science still with us

Despite the evidence in human blood, lived experience of the exposed, recognition of faulty monitors, and increases of cancers, the constant false narrative that TMI caused no harm remains. The faulty science that plagues the residents around TMI also pervades other radiation studies assessing health impact, including those following explosions at Chernobyl and Fukushima. We are still all impacted by this scientific and legal failing surrounding TMI, which makes it much harder to assess radiation’s impact on human health.

*“Radiation doses were calculated under an order from the court governing the TMI Public Health Fund. This order prohibited ‘upper limit or worst case estimates of releases of radioactivity or population doses . . . [unless] such estimates would lead to a mathematical projection of less than 0.01 health effects’. The order also specified that ‘a technical analyst . . . designated by counsel for the Pools [nuclear industry insurers] concur on the nature and scope of the [dosimetry] projects’” from Wing, 1997.

Cindy Folkers is the radiation and health specialist at Beyond Nuclear.

← Too cheap to meter now needs a bailout?
Women of Three Mile Island tell their story →