Five myths about the Chernobyl disaster

Posted on July 23, 2019 by beyondnuclearinternational

No, wildlife isn’t thriving in the zone around the nuclear plant

More than three decades ago, a reactor at the Chernobyl Nuclear Power Plant in the Ukrainian republic of the Soviet Union exploded. A fierce fire burned for the following two weeks, sending columns of radioactive gases and particles across the European landscape and beyond. The accident is an enduring subject of fascination – HBO recently adapted the event into a hit miniseries, and the site is a popular tourist destination – leading to conjecture and misconception.

It resulted in only a few fatalities and casualties

For the past three decades, official reports of casualties and deaths from the Chernobyl accident have been surprisingly modest. Two people died immediately. Twenty-nine died in hospitals, and much later, 15 children died of Chernobyl-induced thyroid cancers.

These numbers have been repeated in recent articles in Newsweek and LiveScience.

Estimates of Chernobyl’s future health effects are also low: In 2006, researchers at the U.N. International Agency for Research on Cancer estimated that Chernobyl-induced cancers by 2065 will total 41,000, compared with several hundred million other cancers from other causes. Forbes even claimed that “only the fear of radiation killed anyone outside the immediate area,” by elevating rates of alcoholism and depression.

Photos of Chernobyl liquidators displayed at a 2010 Independent WHO protest in Paris, France. (WikiCommons)

The actual numbers may be far higher. Unfortunately, Belarus (where 70 percent of Chernobyl fallout landed), Russia and Ukraine have no public tallies of Chernobyl-related fatalities to update the count. But other state data gives us a rough sense of the number of people affected by the disaster over time.

In January 2016, for example, the Ukrainian government said 1,961,904 people in Ukraine were officially victims of the Chernobyl disaster. Ukraine also pays compensation to 35,000 people whose spouses died from Chernobyl-related health problems. These figures do not count Russia or Belarus, where estimates of cancers and fatalities are in the hundreds of thousands.

The Chernobyl accident had only regional consequences

A Newsweek account says only that “a cloud of radioactive material rained down on the nearby towns and villages.” A United Nations report about recovery at Chernobyl, which sits on Ukraine’s northern border, says simply that “the disaster affected Belarus, Ukraine and Russia.” In HBO’s recent miniseries fictionalising the disaster, a physicist briefing Soviet leader Mikhail Gorbachev says the radiation will spread as far as East Germany.

The consequences of the accident reached much farther. The fallout map shows that Chernobyl radioactivity drifted widely across Europe, usually in areas with higher altitudes and precipitation.

Indeed, Swedish scientists were the first to report the Chernobyl incident, because nuclear workers in Sweden set off radiation detection devices as they were walking into a plant on the Monday morning after the accident.

Welsh sheep farmers and their flocks were affected by Chernobyl for decades. (Photo: Rachel Davies, 2011, WikiCommons)

In 1986, 7,000 farmers in northern England and southern Scotland had to pull their sheep from sale after Chernobyl fallout hit them. Two decades later, more than 350 farmers in Britain still faced restrictions on the movement of their animals and the sale of their meat.

Consumer goods harvested in Chernobyl-affected territories continue to travel around the globe. A few years ago, France stopped a large shipment of radioactive mushrooms from Belarus. Chernobyl-contaminated berries from Ukraine regularly enter European markets, and some of those berries migrate to the United States.

Nature is thriving in the zone around Chernobyl

Some seeking an upside to the disaster have heralded the good news that the ecosystem around Chernobyl has rebounded. One company that offers birding tours in the exclusion zone describes it as an “involuntary park” that teaches “key lessons on how wildlife doesn’t need us.”

Scientists have found up to a sevenfold increase in some large mammals and concluded that, though radiation is not good for animals, people have an even more detrimental effect. The Guardian calls the Chernobyl zone a “wildlife haven.”

Such studies tend to concentrate on data from censuses and cameras tracking large, charismatic fauna such as wolves, wild horses and wild boar. Census data tells scientists how many animals there are but little about their health. With chronic low doses of radiation, health effects are subtle and difficult to detect.

Great tits found near Chernobyl — bird at left is normal, right has a facial tumor.

Scientists have also observed abnormalities in barn swallows that breed there, including deformed toes and beaks, and the same radiation has suppressed the growth of pine trees. Such problems might also affect large mammals, too, though they can’t be detected by satellite photography.

Chernobyl was the worst nuclear disaster ever

Chernobyl is often described as the most devastating nuclear disaster in human history. Business Insider, ranking it against other accidents at Fukushima and Three Mile Island, found Chernobyl the most damaging. The International Atomic Energy Agency rated Chernobyl a Level 7 accident, the highest rating possible.

While Chernobyl released the most radioactive fallout at one time in an accident, other nuclear events issued far more radioactive isotopes into the atmosphere. The Chernobyl accident emitted between 50 million and 200 million curies of radioactivity.

The first Soviet and American plutonium plants each spread an estimated 200 million curies of radioactive waste into the surrounding environments as part of daily operations. Until the Test Ban Treaty of 1963 took effect, the nuclear powers, including the United States and the U.S.S.R., blew up 520 nuclear weapons in the atmosphere to test nuclear bombs, creating emissions of long-lasting radioactive isotopes in the billions of curies. 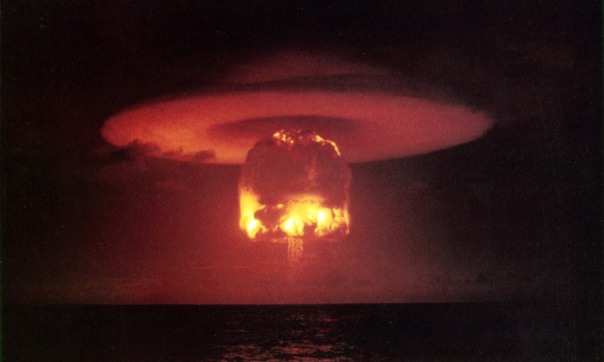 American and Soviet nuclear bomb tests released an estimated 20 billion curies of radioactive iodine between 1945 and 1962. (Photo: Castle Romeo, US Department of Energy)

Chernobyl shows that the Soviet Union was inept

Chernobyl has come to stand for an enduring narrative that Soviet scientists and government officials were uniquely incompetent. “The Ferris wheel left in the city’s decaying amusement park still stands in testament to the folly of the corrupt, paranoid and inept Soviet system,” says USA Today. Grigori Medvedev’s book, “The Truth About Chernobyl,” promises an account of “absurdity and incompetence galore.”

In truth, the Soviet response to the disaster was impressive. The Soviets are most often criticised for waiting three days to inform the public of the accident; concealing it did mean that people in neighboring nations, such as Poland, received protective prophylactive iodine later than is advisable.

Soviet leaders did, however, act to protect their own citizens. (Japanese leaders waited a full two months before they admitted that three reactors at the Fukushima Daiichi nuclear power plant had melted down in March 2011.)

Then there was the medical response, as observed by a team of American doctors who joined Soviet doctors to treat the injured firemen and plant operators at Hospital No. 6 in Moscow.

Within 36 hours of the nuclear disaster, Soviet authorities had relocated 50,000 residents of the city of Pripyat. (Photo: Jose Franganillo/Creative Commons)

The Americans were impressed by how good Soviet doctors were at estimating radiation dosage by studying a patient’s vital signs, and commented on the impressive range of Soviet treatments for radiation poisoning that were unknown in the West.

Of the 19 patients who underwent risky transplantations of bone marrow or fetal liver, recommended by the American team, only one survived. More of the patients who had potentially fatal doses survived Soviet doctors’ treatments.

Kate Brown is a professor of history in MIT’s science, technology and society department. Her latest book is “Manual for Survival: A Chernobyl Guide to the Future.”

This article was first published by the Washington Post, and is republished here with permission.

3 Comments on “Five myths about the Chernobyl disaster”