The false promise of nuclear power

Posted on August 18, 2019 by beyondnuclearinternational

Nuclear power is not clean, efficient, economical or safe

Commentators from Greenpeace to the World Bank agree that climate change is an emergency, threatening civilization and life on our planet. Any solution must involve the control of greenhouse gas emissions by phasing out fossil fuels and switching to alternative technologies that do not impair the human habitat while providing the energy we require to function as a species.

This sobering reality has led some prominent observers to re-embrace nuclear energy. Advocates declare it clean, efficient, economical, and safe. In actuality it is none of these. It is expensive and poses grave dangers to our physical and psychological well-being. According to the US Energy Information Agency, the average nuclear power generating cost is about $100 per megawatt-hour. Compare this with $50 per megawatt-hour for solar and $30 to $40 per megawatt-hour for onshore wind. The financial group Lazard recently said that renewable energy costs are now “at or below the marginal cost of conventional generation” — that is, fossil fuels — and much lower than nuclear. 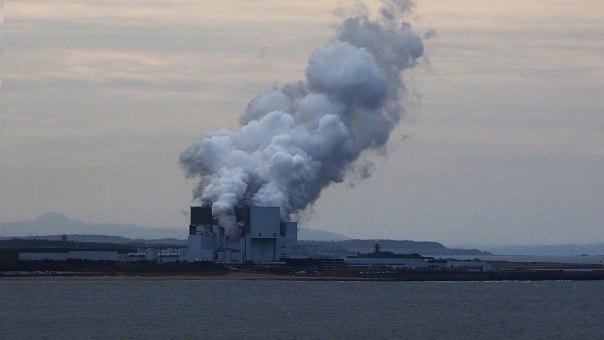 Unlike nearly all other technologies, the cost of nuclear power has risen over time. (Photo: Tilia44 for WikiCommons)

In theory these high costs and long construction times could be brought down. But we have had more than a half-century to test that theory and it appears to have been solidly refuted. Unlike nearly all other technologies, the cost of nuclear power has risen over time. Even its supporters recognize that it has never been cost-competitive in a free-market environment, and its critics point out that the nuclear industry has followed a “negative learning curve.” Both the Nuclear Energy Agency and International Energy Agency have concluded that although nuclear power is a “proven low-carbon source of base-load electricity,” the industry will have to address serious concerns about cost, safety, and waste disposal if it is to play a significant role in addressing the climate-energy nexus.

But there are deeper problems that should not be brushed aside. They have to do with the fear and the reality of radiation effects. At issue is what can be called “invisible contamination,” the sense that some kind of poison has lodged in one’s body that may strike one down at any time — even in those who had seemed unaffected by a nuclear disaster. Nor is this fear irrational, since delayed radiation effects can do just that.

Moreover, catastrophic nuclear accidents, however infrequent, can bring about these physical and psychological consequences on a vast scale. No technological system is ever perfect, but the vulnerability of nuclear power is particularly great. Improvements in design cannot eliminate the possibility of lethal meltdowns. These may result from extreme weather; from geophysical events such as earthquakes, volcanoes, and tsunamis (such as the one that caused the Fukushima event); from technical failure; and from unavoidable human error. Climate change itself works against nuclear power; severe droughts have led to the shutting down of reactors as the surrounding waters become too warm to provide the vital cooling function.

Climate change itself works against nuclear power. Cooper (pictured), flooded in 1993. Such events only will become worse.

Advocates of nuclear energy invariably downplay the catastrophic events at Fukushima and Chernobyl. They point out that relatively few immediate deaths were recorded in these two disasters, which is true. But they fail to take adequate account of medical projections. The chaos of both disasters and their extreme mishandling by authorities have led to great disparity in estimates. But informed evaluations in connection with Chernobyl project future cancer deaths at anywhere from several tens of thousands to a half-million.

Studies of Chernobyl and Fukushima also reveal crippling psychological fear of invisible contamination. This fear consumed Hiroshima and Nagasaki, and people in Fukushima painfully associated their own experiences with those of people in the atomic-bombed cities. The situation in Fukushima is still far from physically or psychologically stable. This fear also plagues Chernobyl, where there have been large forced movements of populations, and where whole areas poisoned by radiation remain uninhabitable.

The combination of actual and anticipated radiation effects — the fear of invisible contamination — occurs wherever nuclear technology has been used: not only at the sites of the atomic bombings and major accidents, but also at Hanford, Wash., in connection with plutonium waste from the production of the Nagasaki bomb; at Rocky Flats, Colo., after decades of nuclear production; and at test sites in Nevada and elsewhere after soldiers were exposed to radiation following atomic bomb tests.

Nuclear reactors also raise the problem of nuclear waste, for which no adequate solution has been found despite a half-century of scientific and engineering effort. Even when a reactor is considered unreliable and is closed down, as occurred recently with the Pilgrim reactor in Plymouth, or closes for economic reasons, as at Vermont Yankee, the accumulated waste remains at the site, dangerous and virtually immortal. Under the 1982 Nuclear Waste Policy Act, the United States was required to develop a permanent repository for nuclear waste; nearly 40 years later, we still lack that repository.

Finally there is the gravest of dangers: plutonium and enriched uranium derived from nuclear reactors contributing to the building of nuclear weapons. The technology needed to enrich uranium to commercial reactor grade can easily be scaled up to enrich uranium to weapons grade. When commercial reactor fuel fissions, it produces plutonium, which ends up in the high-level radioactive waste. Wherever extensive nuclear power is put into use there is the possibility of its becoming weaponized.  Of course, this potential weaponization makes nuclear reactors a tempting target for terrorists.

There are now more than 450 nuclear reactors throughout the world.* If nuclear power is embraced as a rescue technology, there would be many times that number, creating a worldwide chain of nuclear danger zones — a planetary system of potential self-annihilation. To be fearful of such a development is rational. What is irrational is to dismiss this concern, and to insist, after the experience of more than a half-century, that a “fourth generation” of nuclear power will change everything.

Coal is not the issue. The appropriate comparison is between nuclear and renewable energies. Renewables are part of an economic and energy revolution. (Photo: U.S. Dept. of Interior)

Advocates of nuclear power frequently compare it to carbon-loaded coal. But coal is not the issue; it is already making its way off the world stage. The appropriate comparison is between nuclear and renewable energies. Renewables are part of an economic and energy revolution: They have become available far more quickly, extensively, and cheaply than most experts predicted, and public acceptance is high. To use renewables on the necessary scale, we will need improvements in energy storage, grid integration, smart appliances, and electric vehicle charging infrastructure. We should have an all-out national effort — reminiscent of World War II or, ironically, the making of the atomic bomb — that includes all of these areas to make renewable energies integral to the American way of life. Gas and nuclear will play a transitional role, but it is not pragmatic to bet the planet on a technology that has consistently underperformed and poses profound threats to our bodies and our minds.

Above all, we need to free ourselves of the “nuclear mystique” : the magic aura that radiation has had since the days of Marie Curie. We must question the misleading vision of “Atoms for Peace,” a vision that has always accompanied the normalization of nuclear weapons. We must free ourselves from the false hope that a technology designed for ultimate destruction could be transmogrified into ultimate life-enhancement.

Robert Jay Lifton is author of “Death in Life: Survivors of Hiroshima,” and more recently, “The Climate Swerve,” and of the forthcoming “Losing Reality.” Naomi Oreskes is professor of the history of science and affiliated professor of Earth and Planetary Sciences, Harvard University.

This article first appeared in The Boston Globe and is republished with kind permission of the editors and the authors with a few minor edits.

Headline photo of Limerick nuclear power plant in Pennsylvania, by Smallbones for WikiCommons.

← Her town hid a secret
闇により深く溶け込む原子力規制 →