Posted on September 29, 2019 by beyondnuclearinternational Dismissal of Navajo suffering is a historic trend

On the eve of the 70thanniversary of the bombing of Hiroshima, August 5, 2015, three million gallons of thick-looking mustard yellow water ran through Navajo land, emptying into the San Juan River, then winding to the Utah-Arizona border. EPA mine clean-up workers accidentally breached an abandoned gold debris dam during a remediation of other contaminating mines. By Nagasaki Day 2015, photos of the San Juan River still showed the sickly dense yellow color of the rushing waters. 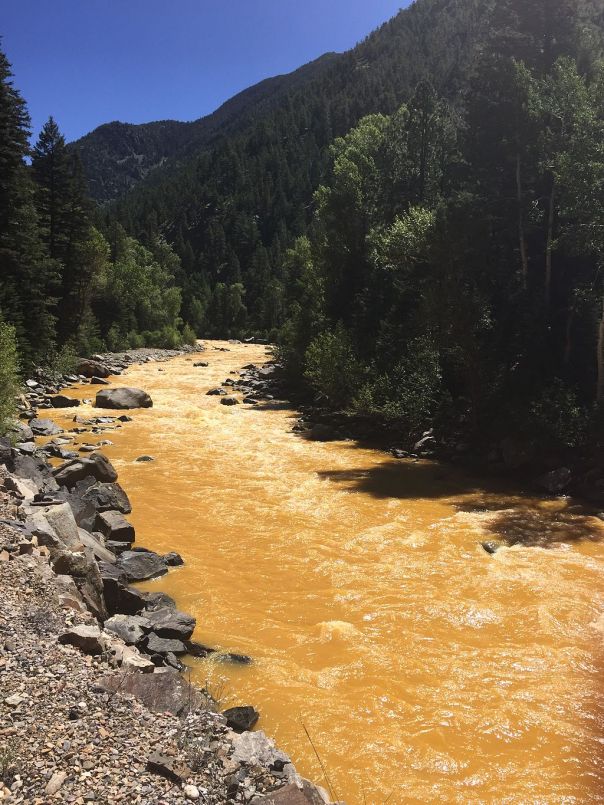 The Animas River between Silverton and Durango in Colorado, USA, within 24 hours of the 2015 Gold King Mine waste water spill. (Photo: riverhugger/Wikimedia Commons)

The yellow waters of the San Juan triggered memories for Perry H. Charley of the 1979 Church Rock uranium mill and mine tailings break, the largest release of radiation in US history, occurring on the anniversary of the first nuclear weapons use, Trinity Day, July 16, 1945. As reported by Beyond Nuclear International in a July 16, 2018 story, “Ninety million gallons of liquid radioactive waste, and eleven hundred tons of solid mill wastes, burst through a broken dam wall at the Church Rock uranium mill facility, creating a flood of deadly effluents that permanently contaminated the Puerco River.”

Occurring just months after the Three Mile Island partial meltdown in Pennsylvania, the Church Rock disaster, which washed radioactive sludge “into gullies, contaminated fields and the animals that grazed there, and made drinking water deadly,” for the largely Navajo population there, rarely rates a mention.

Dismissal of Navajo suffering fits seamlessly into a historical trend. Uranium found on the Navajo lands beginning in the 1940s was needed for the secret project to build the first atomic bombs. The Diné, Pueblo, and Hopi miners were never told what they were mining, warned of any health effects, nor given the type of protection such as the basic ventilation required in other mines.

Indeed, nuclear pollution affects indigenous cultures disproportionately. At least 80% of the mining, milling, production, testing, and storage of nuclear materials occurs near indigenous communities worldwide. Scientific uncertainty of how radon causes cancer was given as a reason for not protecting miners and millers from known dangers of radiation. This decision to sacrifice the miners to meet production goals for nuclear advancement is a “point source” for one of the first nuclear wasted landscapes, a nukescape. 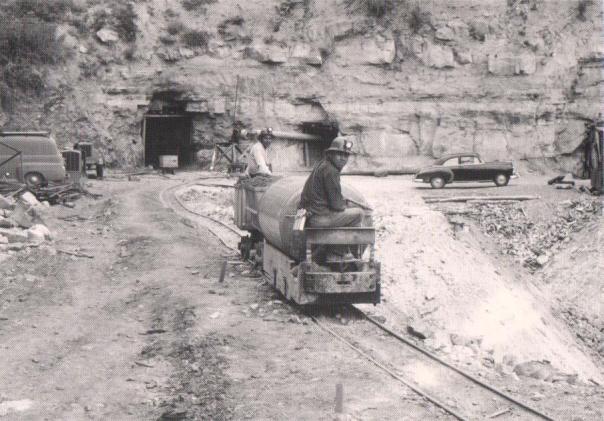 Uranium miners and millers were not protected from the known dangers of radiation. (Photo: Serc.Carleton.edu. Provided by the authors)

The word nukescape has the word ‘escape’ hidden inside of it, urging a way out. Charley has been crafting an escape hatch of Diné words in his numerous roles as a Traditional Ecological Knowledge (TEK) practitioner, environmental scientist, and creator of words working between cultures.

The culture of the Navajo “demands a positive interaction with the forces of Nature” explains Charley, who is Ozéi Tachii’nii (Hopi People of the Red Running into the Water Clan) and born for Ashjjhi (Salt Clan). Perry is the son of Harris Charley. His maternal grandfather is Hooghan Lani (Many Hogans Clan) and his paternal grandfather is Naakai Diné (Mexican People Clan).

Radiation contamination disrupts the primary goal of the Navajo which is Hózhó Naasháa Doo, to “walk in harmony”, Charley says. The Diné word hózhó is “translated” by Charley into English as “to dwell in beauty” but, he insists, there is no real linguistic equivalent.

Charley assisted with creation of the 2005 Diné Natural Resources Protection Act of the Navajo Nation, a document that bans uranium mining and reaffirms the human right to not be contaminated. Charley’s effort joined a chorus of work at the grassroots level, which included decades of collaboration and research by many small, community-advocacy organizations.

The 2005 ban finally propelled their story into the mainstream media. Their work, amplified by Judy Pasternak’s series of articles in the LA Times, helped motivate Congressman Henry Waxman of Los Angeles to sponsor an October 2007 congressional hearing, which materialized into a massive clean-up on the Navajo Nation.

About twenty percent of the US uranium supply came from the Navajo Nation and the radiation from uranium mining spread easily. Mill and mining wastes were discarded as “overburden” without regulation, spilling into waterways and collecting in piles where children played. Radiation traversed invisibly through the landscape to the present generation of the people of the Navajo Nation, a different type of inheritance compared to the way language and tradition are carefully handed from one generation to the next.

Since 2007, the US EPA has entered into “enforcement agreements and settlements valued at over $1.7 billion to reduce the highest risks of radiation exposure to the Navajo people from Abandoned Uranium Mines (AUMs).”

Charley’s connection to radiation is innate. His mother, Sarah Charley, buried his umbilical cord and afterbirth under a tree chosen to protect it, and him, in life. In Diné tradition, one does not leave the area where one is born for long, making the uranium contamination there inescapable.

Charley’s father worked in the unregulated uranium mines and died from respiratory failure caused by radiation fibrosis and silicosis of the lung. It was a disease with which the Navajo had no experience and for which they had no vocabulary. Charley’s father was one of the thousands of unprotected uranium miners sacrificed in the building of the first nuclear weapons and uranium economy. Such miners were studied without consent. Information pertinent to their health, such as signs of lung cancer, were withheld. 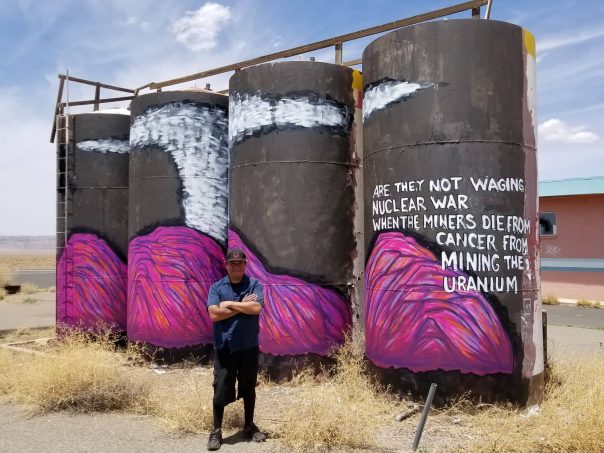 Artists like Jerrel Singer, pictured, have captured a widespread sentiment among Navajo. (Photo courtesy of the artist)

Charley later worked with Interior Secretary, Stuart Udall, to hold those responsible accountable in order to protect others. This mission led Charley to develop the Navajo AUM Land Reclamation Department in 1988, demanding protection from authorities. He found one thousand and thirty-two uranium abandoned mines and waste sites, spreading radioactivity in the wind and rain. Dangerously left open and unmarked, mine shafts, caverns and innocuous piles of what looked like dunes were inviting play areas for children and threatened the physical safety of tribal members. Pictures in Peter H. Eichstaedt’s If You Poison Us: Uranium and Native Americans (1994) show Charley in front of abandoned uranium mines detecting radiation and sealing caves, risking his health to protect others.

Charley was also a key force in the Tronox v. Anadarko case, beginning in 1977. He worked as a liaison between government agencies, the People, and with Diné College to help facilitate citizen led organizations and actions that led to accountability. The Tronox settlement was the largest environmental cleanup award in history, $5.15 billion in 2015 awarded to repair the past environmental destruction by Kerr McGee to U.S., state governments, the Navajo Nation, and environmental trusts created to clean up contaminated sites; in June of 2018, $888,000 more went to the effort.

Unfamiliarity with radiation further aggravated the Diné experience: how were they to comprehend, and heal, from these atrocities without the words to address what had happened? There were no Diné words for radon progenies and radioactivity, for alpha and beta particles, or gamma radiation.

Charley changed that with his lifelong effort to create multiple glossaries, constructing Navajo words for radiation-related terms. These glossaries include a Navajo-English Thesaurus of Geological Terms, the Glossary for Basic Cancer Terminology in the Navajo Language, and Diné Diabetes Terminology, among others. Currently, the Diné Genetics Development Council, of which Charley is a member, has submitted a proposal to develop a glossary of genetics terminologies.

Charley proudly speaks Diné (in English “The People”) even though his boarding school forbade him to speak his language. He has cultural and nuclear history knowledge, western environmental sciences training and hands on lifetime experience with remediation and studies. In consultations with and approval from Traditional Practitioners (Medicine people), he often uses ancient and esoteric words used in medicine circles to enhance healing and restoration. He explains, “The spoken Diné words are sacred, powerful and become a reality when spoken.”

In Diné stories, a mythical monster, before it was slain, gave birth to many small monsters, which the Navajos today equate with the radionuclides emitted from decaying uranium.

Charley co-authored a study “Navajo Birth Outcomes in the Shiprock Uranium Mining Area” that questioned the limits of radiation health safety science to understand the relationship between birth defects and uranium.

Charley knows first hand “there are essential differences between Diné and Western approaches and applications of research and knowledge. Therefore, these differences also apply to the process of research method and analysis.

“The most important distinction in learning is the notion of the sacred and the secular,” said Charley. Rather than segmenting and categorizing subjects as in Western thought, Diné philosophy uses a holistic process, embodying mind and spirit.

In 1996, Charley cofounded the Uranium Education Program at the first traditional Tribal College, Diné College, and later, the Diné Environmental Institute. In his research, Charley teaches his interns the Diné conception of and relationship to the environment and the natural elements of life. These are strongly linked to the use of core ancient Diné principles and values which should guide environmental and public health research. This trains Navajo students to become a new kind of scientist, changing science itself.

Charley moves between venues like the US EPA, the National Academy of Sciences and elders to establish zones of safety, integrating traditional ecological knowledge into radiation health science studies and law. Charley assisted Emeritus Chief Justice Robert Yazzie in drafting the 2015 Diné Uranium Remediation Advisory Commission, which was reviewed, revised slightly and passed into Tribal laws. He now serves on the Commission.

Most recently, in 2018, Charley and his programs became involved with a $429,467 US EPA grant to study the effect of uranium pollution on the health of livestock near mine areas in the Cove region of the Navajo Nation.

Over many years, Charley’s life study of interpreting radiation concepts and working with the language to name the problem of nuclear contamination in the traditional way, assisted the creation of “Diné Language Translations of Tronox-Specific Terminologies” 2018 — a glossary paid for with part of the Tronox settlement funds to allow communication between scientists and the Navajo people in their own language about the cleanup of severely contaminated former mining sites.

“The sacred language we were once forbidden to speak is the same sacred language that saved our Nation and now restores harmony and balance to the Diné and their lands” says Charley. His glossary also gives voice to the proper words to be used for healing rituals.

“Over thousands of years, Diné Traditional Ecological Knowledge has been used and passed down largely through such oral traditions,” said Charley.

Charley speaks of himself in the humblest of terms, as a servant, proud to call himself a “simple sheepherder.” However, Charley’s work has been influential in restoring health in mental, physical and spiritual realms. He transmutes the pain of loss and contamination into resilience and foresight. Environmental educator David Orr refers to our present ecological crisis as a result of “a disorder of thought.” But Perry H. Charley is the embodiment of restoration of the human right to live free of uranium contamination in his homeland.

Linda Marie Richards teaches history and history of science for the School of History, Philosophy and Religion at Oregon State University Honors College.

This article is drawn from Richards’ forthcoming book, Human Rights and Nuclear Wrongs, for West Virginia University Press’s Energy and Society Series.The authors are grateful to Perry H. Charley for his work and contribution.