Rebels with a very big cause

Posted on October 13, 2019 by beyondnuclearinternational

Part street theatre and all desperate passion, the Extinction Rebellion is blossoming everywhere

Actions are flourishing around the world as climate protesters mobilize. Below, we offer a taste of some of the actions by the Extinction Rebellion as Rebels describe their Day Two experiences in an on-going global action.

Republished with kind permission of the Extinction Rebellion.

The seeds have been sewn. Compassion; awareness; courage.

They landed in cities, suburbs and farmland; in hearts and in minds, taking no account of age or occupation or background.

In some cities we’re established on the roads and growing stronger by the day. Tents are assembled, flags are dangled, kitchens put together. In other places we’re meeting, painting, blocking: making our mark in other ways.

Rebel campers make it through the first night of Rebellion. (Photo: Extinction Rebellion)

But the deeper growth is not a thing which can be touched. It comes in the form of newly-made communities coming together to dance, sing, laugh and cry. In creativity, diligence and generosity combining into miraculous works of art.

In love. And in a rebellion – strong enough to fight and win against an ecocidal status quo.

The forces of ‘law and order’ will oppose us in the coming days. Their representatives will hassle us and threaten us and maybe even hurt us. The media establishment will slander, ignore and misconstrue us.

These things won’t stop us; won’t even slow us. If we won’t be heard, we’ll shout and sing our message louder. If disruption doesn’t stop the system, we’ll simply have to do it bigger and do it better.

We’re putting down roots – and no government can take them out.

After Monday’s exhilaration, rebels have been putting down roots and getting used to life in the capital. As we found in April, there comes a point at which it seems almost natural that we would be here in the roads.

Natural, but also nicer:instead of car engines — choirs and samba bands; instead of throngs of busy strangers — free food and open dialogue (not least from incorrigible truth-teller Jonathan Pie!) 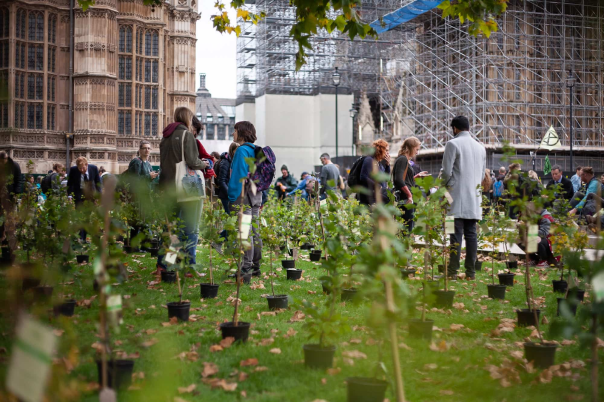 Many trees were planted at Westminster. (Photo: Extinction Rebellion)

Not everyone seems to agree with the improvement. The arrest count continues to climb — already at a staggering 550 — and it’s partly due to police pressure that several of our sites have merged together for greater cohesion.

Despite all this, the police response has yet to really follow through on the earlier tough talk. The seriously questionable tactic of disrupting our infrastructure hasn’t yet managed to stop a gradual blossoming of gazebos (largely just in time for this afternoon’s biblical downpour!), kitchens and tents in various sites. 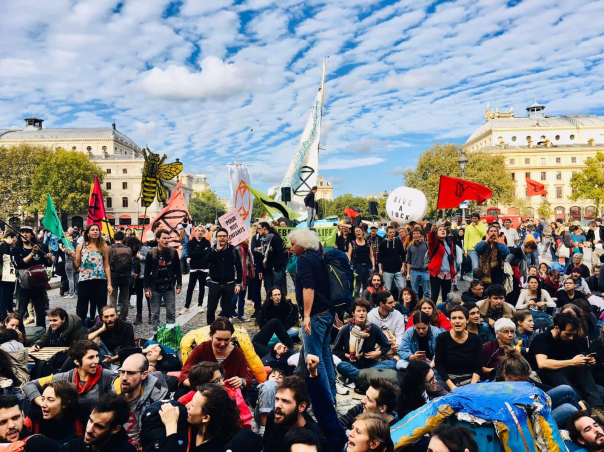 The occupation at the Place de Chatelet continues and thrives.

To the surprise of French rebels, no arrests or police force has yet been used to clear the crucial intersection of the capital.

Among strategic and logistical questions, general assemblies at the site guess at why this might be: to avoid a repeat of the backlash to their last repression? To split the environmental movement from the Yellow Vests? Nobody knows. 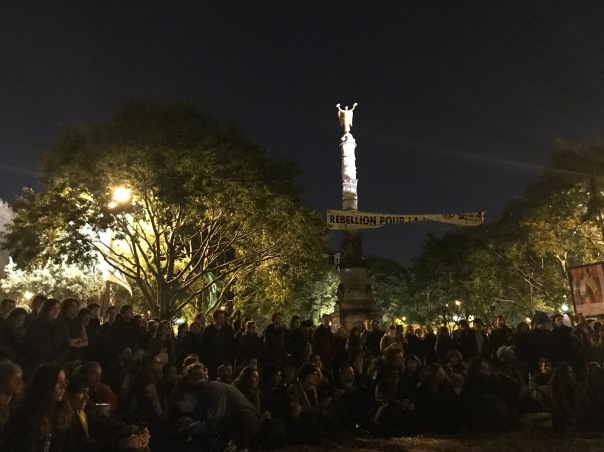 In the meantime, the party is more alive than ever and rebels enjoy this calme avant la tempête to organise, hang a banner as high as the statue of the place de Chatelet can go, hold free classes on climate change by experts, and hold debates on solutions to combat our climate and ecological crisis.

And, of course, Parisians gather to dance.

Heavy rain during the day did not stop the dancing! (Photo: Extinction Rebellion)

But perhaps the most ‘Parisian’ exploit of the rebels is the splendid Gazette d’Extinction Rebellion which appears almost four centuries after the first newspaper, the Gazette de France, was founded there in 1631.

Of course, the XR Gazette transforms the original royalist paper into a revolutionary call for love, fraternity, and consideration for nature. Its horoscope and its tone — satirical and light-hearted — revives rebels’ spirits and conversations at the end of the day, and the beautifully designed paper is enthusiastically distributed and shared around campsite.

For a condensed English version of yesterday’s Gazette, click here ; for those of you lucky enough to understand the tongue of Molière, you can find the original first issue here.

With the start of Rebellion, XR Germany successfully blocked two key parts of Berlin – the Big Star roundabout by the Siegessäule and a major junction at Potsdamer Platz.

At Potsdamer Platz, the police began clearing out rebels at dawn and, with the help of the fire brigade, even the lock-ons didn’t last long. The rebels split up and began a series of smaller actions across the city, including a blockade at the headquarters of the CDU political party and a funeral march with a symbolic burial of Mother Earth.

Rebels at the Big Star roundabout were still going strong with the help of space blankets and thermos flasks. By late morning, giant tarps had been erected to protect them from the rain.

The roundabout was suddenly a tented village, and the first lock-ons were in place by noon.

Police in the area started to multiply, and with nearly one police officer for every two protestors, the order soon came to clear out.

Some rebels were carried away and left in puddles, while others had pain compliance techniques used against them. But the lock-ons remained in place, and while some single-lane traffic was able to flow again, the police could only partially clear the junction.

The blockade lived on, the police withdrew, and not a single rebel had been arrested! By sunset, XR Germany was celebrating 40 hours of continuous, peaceful protest for this greatest of all causes.

Irish Rebels Have Had Enough

The last few days have been a difficult time for XR Ireland. In response to the Irish government pushing ahead with plans to build a U.S. fracked gas terminal in Shannon, rebels decided to add a demand for Rebellion Week: Stop the Shannon LNG Terminal plus any new fossil fuel infrastructure!

Rebels kicked off the week with a symbolic funeral of the Earth, a samba parade with a pink ‘Tell the Truth’ boat, a planting of seeds, and some passionate speeches.

The civil guards (police) allowed rebels to camp in one of the city’s central parks and the first day passed in a peaceful, family-friendly atmosphere.

The sit-in at the Jail. (Photo: Extinction Rebellion)

There was a spontaneous sit-in at the gates of the Dáil (Ireland’s Parliament) that meant some politicians were locked in. XR Ireland decided to deliver their message to their political representatives: “We have had enough”. The rebels refused to move and chanted “We do it for your children’s future too”. The civil guards removed rebels, but made no arrests, and even thanked the protestors for their peaceful presence. 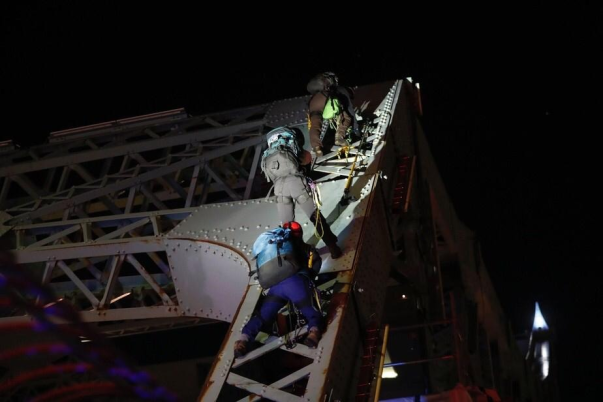 Three Quebecois rebels closed all five lanes of traffic on the busiest bridge in Montreal for over an hour. At rush hour.

Two women and a man scaled the huge metal structure in the middle of the night, forcing police to close the bridge to traffic. Sadly, the brave rebels were stopped before they could drop their 20m wide banner and were arrested once back on the ground.

A video of one rebel explaining the action has gone viral:

‘We are not the farfelus (crazy ones). Those who believe we can keep growing forever in a finite world are the ones who live in a fantasy land.’ 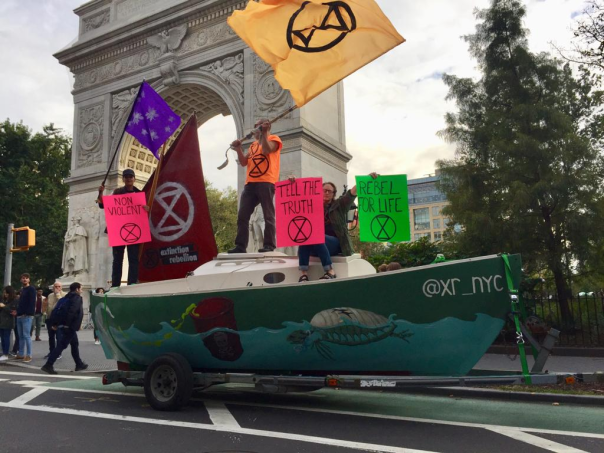 A group of over 40 rebels joined Brother Fulfillment from Thich Nhat Hanh’s Plum Village in a meditative action calling on the government to Act Now. They blocked the entrance to City Hall by staging a seated meditation, a peaceful act of resistance rooted in historic acts of civil disobedience.

The mascot boat ‘Vaquita’ traveled through New York City, spreading the news of the Rebellion. Featuring images of the nearly extinct porpoise for which she is named and large Extinction symbol flags, her crew handed out flyers about the rebellion and talked to passersby stopped in traffic.

They declared their voyage a success and look forward to getting her back out in the city soon.

15 rebels started a hunger strike in front of Parliament in Rome to raise awareness of the threat to food insecurity caused by the crisis.

Michael Stipe, of alt rock band R.E.M. fame, boosted morale in XR Rome by adding his voice to the chorus of rebels:

“I want my voice to be part of this change of consciousness. I believe we can start the change needed to improve our wonderful planet, our position and our place on earth!”

This came the day after a heartfelt performance in Piazza Venezia in front of the famous landmark “colonna Traiana”, titled the blood of our children. Rebels held hands as red “blood” was poured onto their exposed skin and was then wiped clean gently. 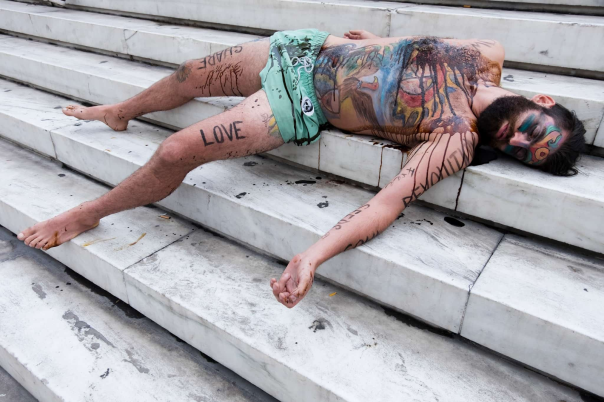 Greek rebels joined other climate emergency protestors to stage a die-in against fracking on the steps of Parliament. (Photo: Extinction Rebellion)

Earlier this month, the Greek government voted to allow the oil companies Total, ExxonMobil, Edison, Energean and Hellenic Petroleum, to extract oil and gas in sea beds around the country.

Greek Rebels demanded that their government repeal these concessions to the oil companies and tell the truth about the disastrous effects of oil exploitation on ecosystems, biodiversity, the local economy and public health.

Sunday was our first rebellion. The Climate Emergency is ignored and not acted upon in our country, but there is a fast-growing movement of people who are beginning to join forces and bring about societal change.

Our original plan was to have an official Declaration of Climate Emergency, followed by a die-in, yoga training for “spiritual warriors”, music gathering with unplugged instruments, and putting up posters with QR codes that link to websites proposing solutions for change.

However, the weather decided otherwise. Torrential rain poured down throughout the day and we’re so proud of all the rebels who showed up regardless.

Despite an initial pledge to not use disruption, the group decided to walk through the rain and partially obstruct traffic in order to be more visible. The action got decent media coverage, and we all felt empowered with a hope that we will indeed make a change!

Sri Lankan rebels are now planning to assist local environmental causes while striking and spreading awareness at the same time! Our next action on Saturday will be an official Declaration and a mass die-in followed by a beach clean-up.

See more actions from the Extinction Rebellion from around the world. And if you’d like to help, please check out the XR guide and learn more about XR. To connect to rebels in your local area, get in touch with your nearest XR group. If there’s no active group near you, you can start your own!  If you’d like to see previous newsletter issues, you can find them here.