Americans say the Green New Deal is “too expensive”

Posted on December 15, 2019 by beyondnuclearinternational 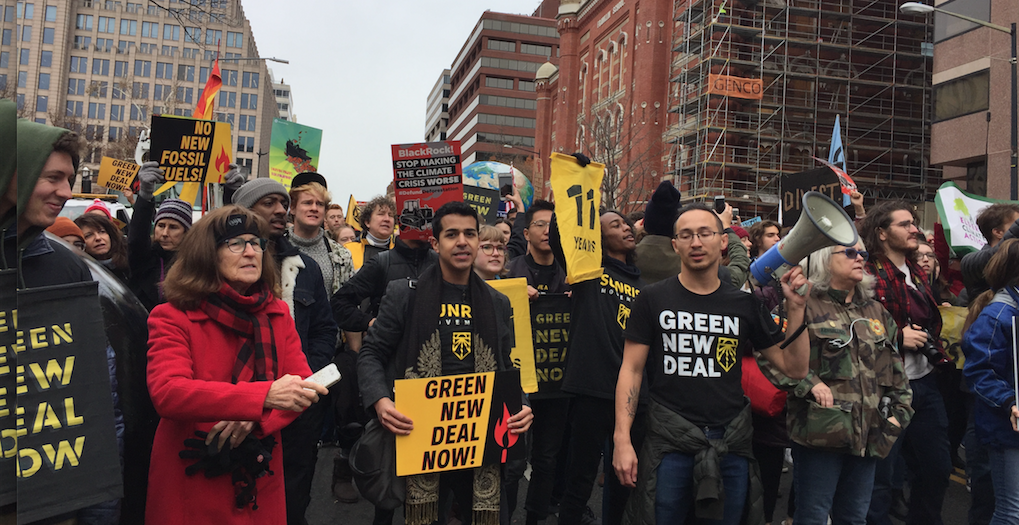 Are skewed polling and media bias to blame?

What are opinion polls and what exactly do their outcomes signify?

Their results are predicated on two things:

What is missing, when the media report the results of these polls, is their own failure to adequately inform the public on the issue at hand in the first place.

Thus, the responses in a recent Washington Post/Kaiser Family Foundation Poll on the Green New Deal (GND), as reported in an article in the November 27 edition of the Post, reflected the fact that most people know almost nothing about the GND at all. This is hardly surprising. Most mainstream media outlets, whether print, radio and television or on line, saturate us day after day with everything Trump.

The climate crisis is at last starting to get some traction in the media. But it’s way past due. And it’s only happening now that there is a crisis. The opportunities to heed the scientific warnings even decades ago and start enlightening the public then, were missed, deliberately or otherwise.

To realize just how long the media has been delinquent in properly educating its audience about climate change, l’m reminded of a letter to the editor written to the Washington Post by the late New Jersey senator, Democrat Frank Lautenberg. It’s worth reproducing in full because it encapsulates the longstanding negligence of the media in general on the subject of climate change, and its costly and misguided insistence on debate over fact.

It’s also a stark reminder of just how long we have known about our present crisis without adequately sounding the alarm or giving the topic the necessary amount of ink or air time. Lautenberg’s letter is from December 11, 2004.

“Juliet Eilperin’s Dec. 2 news story on climate change, “Humans May Double the Risk of Heat Waves,” is the latest example of the media’s “he said, she said” treatment of what reputable scientists say is one of the greatest threats to the human race. Even worse, the article countered the findings of the world’s top climate scientists by quoting an oil industry-funded economist. Such reporting is not credible, nor does it illuminate a subject of significant importance.

“The article began by citing a peer-reviewed study published in the revered scientific journal Nature, which reported that the risk has more than doubled for the type of lethal heat wave responsible for 35,000 deaths in Europe last year. But the last half of the article is squandered on the views of Myron Ebell, an economist — not a climate scientist — whose “studies” at the American Enterprise Institute are funded by Exxon Mobil. The article fails to mention this shameless conflict of interest.

“The problem with this type of reporting was highlighted at a recent Senate Commerce Committee hearing. Robert Correll, senior fellow at the American Meteorological Society, warned, “The trouble with a debate of this nature is you put 2,600 [scientists] against two or three or four [scientists who disagree].” Ebell is not in the same league as the qualified climate scientists who report that the climate is changing before our eyes; only the intensity and the speed of those changes are unknown. Your newspaper does an injustice to its readers by giving Ebell’s caterwauling equal weight with the widely accepted views of reputable and unbiased scientists.” 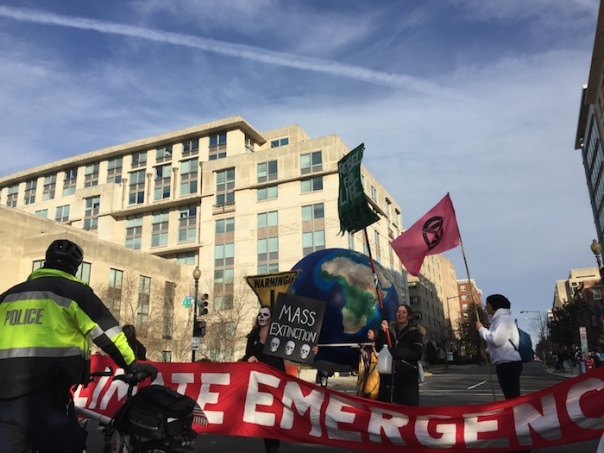 We are in a climate emergency that is too far along for caution. (Photo: Linda Pentz Gunter)

The coverage has finally, for the most part, shifted away from debate, given the overwhelming scientific evidence. But much media coverage still tends toward a more cautious approach when covering what is now a most dire and urgent situation. When it comes to the climate crisis, to err on the side of caution is to err indeed.

This was most starkly evident in the Washington Post’s takedown of Bernie Sanders’ version of a Green New Deal (the Post tries very hard not to cover Sanders at all.) In a trigger-happy August 22, 2019 editorial loaded with pot-shots, the Post cemented the view, reflected in its later poll, that solving the climate crisis the radical way is simply “too expensive.”

The editorial board also used the opportunity to reiterate its blind adherence to nuclear power as a solution. (We duly took them to task in a subsequent rebuttal, which the Post published on August 29).

When a Green New Deal blueprint was first rolled out on Capitol Hill by Rep. Alexandria Ocasio-Cortez, aka AOC, (D-NY) and Sen. Ed Markey (D-MA), the media coverage largely avoided the substance of the proposal, but we were back again to the “he-said-she-said” debate on its realism, its practicality, its expense. Such arguments were apparently much better entertainment value than trying to educate the public about what was actually in it.

The word “socialism” got bandied about to denigrate the GND —and AOC, who frightens moderate Democrats as much as she does Republicans — without any effort to define what socialism might actually mean for people’s daily lives. The standard editorial position was that any version of the GND endorsed by Sanders or AOC or even Markey was totally unrealistic.

Yet, buried deep in the Post’s own November 27 polling article, at the end of the 12th paragraph, came this telling sentence: “Scientists warn that drastic action is the only way to avoid catastrophic climate impacts [emphasis added].

Despite this, for the preceding 11 paragraphs, we heard the views of evangelical Christian Trumpers and middling independents on the Green New Deal. And guess what they said? The GND was too much too fast and too expensive. These views matched the polling results. “Among adults who have heard at least a little about the Green New Deal, 53 percent said it is not realistic,” said the article.

Why do they think that? If scientists are indeed telling us that the only way to tackle the climate crisis, the only realistic approach left, is drastic carbon cuts in line with the substance of the Green New Deal, then why do poll respondents reject it? Because what they’ve read in the newspapers or seen on television is that it’s too expensive, too extreme and likely “socialism.” And because what they have heard about it is, indeed, only “a little.” 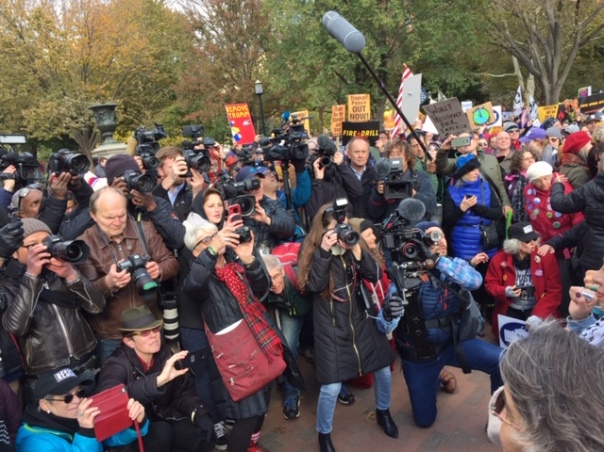 The press has a moral obligation to cover the truth, and not only when it’s “sensational.” (Photo: Press mob at Fire Drill Fridays, by Linda Pentz Gunter)

News outlets have a moral obligation to report the facts and tell the truth. The value of doing this was reflected in the details of the poll itself where a whopping 78% of respondents supported the “guaranteed jobs with good wages for all U.S. workers” component of the GND proposals. Seventy percent loved the idea of upgrading all U.S. buildings to increase energy efficiency. Sixty nine percent wanted to see 100 percent of U.S. power coming from zero-emission energy sources within 10 years.  All drastic, all fast, and all of which will be expensive.

Some of the polling questions weren’t framed quite so neutrally. How many would agree to “reduce the number of coal mining jobs in the U.S.?” returned 55% in favor. But it’s the wrong question. The GND is not about depriving people of jobs. The GND is about retraining and reassigning good, union jobs. That outcome was missing from the question.

Yet, despite an overwhelmingly favorable response to the specific details of the GND, a majority of the American public polled don’t think we should spend a ton of money on one of the two biggest existential crises of our lifetimes (the other is nuclear weapons, which genuinely are too expensive.)

We have all of us, collectively, left it too late to, as it were, nickel and dime over this, or trillion dollar over it. Whether the GND costs Joe Biden’s $1.7 trillion or Bernie Sanders’ $16.3 trillion is not the point. We have no choice but to pony up.

Besides, trashing the trillions misses the other calculation — what will actually be saved by rapidly implementing the GND.

Over the long run, even Sanders’ price tag will seem like a bargain compared to the cost in health emergencies, natural disasters, mass migrations and other outcomes wreaked by climate havoc. Isn’t our future worth at least a $16.3 trillion investment?

It’s high time the media take seriously the warnings from scientists and start to report in a constant and meaningful way about what the Green New Deal would really deliver. It’s a national disgrace that “more than 3 in 4 Americans had heard little or nothing about the Green New Deal,” as the Post article reported.

The Post/Kaiser poll, like many, simply reflects what people have been exposed to by the media, not what they would actually believe had they been provided with a steady flow of real information in the mass markets where they get their news. The Washington Post should understand that it won’t just be democracy that will die in darkness if they and others don’t step up. We all will.