Battle against dumping of radioactive mud set to resume

In 2018, French nuclear company, Électricé de France (EDF), dredged up radioactive mud around its coastal Hinkley Point C two reactor construction site in England, and dumped it in Welsh waters just off the coast of Cardiff. The operation caused considerable opposition, and the scientific integrity of the testing used to analyze the mud was strongly contested as we showed in our 2018 story on the first round of mud dumping.

Now, EDF is set to apply for a new license from Natural Resources Wales (NRW) to dredge up an additional 780,000 tonnes of sediment to make way for the installation of the Hinkley Point C cooling water intake system. This mud would again be dumped in Cardiff Bay. NRW sanctioned the earlier dump, claiming the levels of radioactivity in the mud were “well within legal limits and therefore suitable for disposal at sea.”

However, as one of our authors here, marine biologist, Tim Deere-Jones, argued at the time, the methodology and extent of the testing was set up to deliver a “no harm” conclusion and did not, literally, dig deep enough to uncover the true extent of contamination.

As EDF prepares its case to resume dumping, Deere-Jones and CND Cymru’s Brian Jones, once again challenge an operation that has serious health implications for nearby populations and wildlife.

By Tim Deere-Jones and Brian Jones

Data from the government funded “Radioactivity in Food and the Environment” (RIFE) reports for 2016, 2017 and 2018 show that EDF’s dredging of underwater sediment and shoreline construction work at Hinkley Point have resulted in significantly increased radioactivity levels in the environment.

EDF’s operations have disturbed radioactive particles from the Hinkley Point A and B nuclear power stations, which had been relatively contained within the sediments, resulting in them now being detected at far higher levels than before the dredging began. 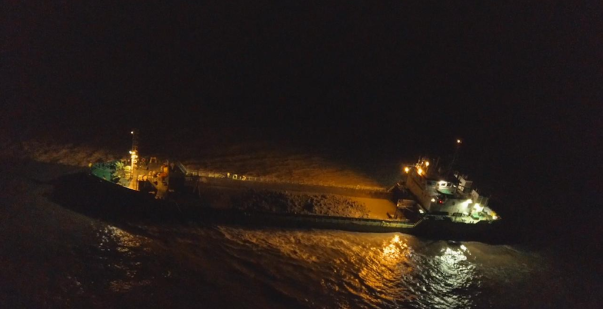 The dredge and dump ship in action by night in 2018.

RIFE measured radioactivity at seven locations along the Somerset coast. The results indicate a significant increase in the distribution of radioactive sediments from the Bridgwater Bay and River Parrett Estuary construction activity into the wider regional marine environment.

Note: Weston is the most easterly site sampled, and so it is possible that increases in concentrations occurred further along the coast.

These results are the only data available to indicate the likely effects of EDF’s dumping of sediment containing radioactive particles dredged from the Hinkley site in the Cardiff Bay marine “dispersal” site.

“Our Campaign urged the Welsh Government to conduct radioactivity measurements along the Welsh shorelines that were likely to be affected by the dumping of Hinkley sediment off Cardiff Bay before and after the dumping took place.

“The refusal of Welsh Government and Natural Resources Wales to carry out the research advised by the Stop the Dump campaign has left coastal communities in a position of complete ignorance about the impacts of the dump.

“Although we have no Welsh coastal data, these results from the Somerset coast confirm our worst fears and predictions.

Protest against the Hinkley mud dump outside the Welsh Assembly. (Photo courtesy of Brian Jones)

“Our supporters are deeply disappointed that the nuclear industry was allowed to proceed with this foolhardy action and that the concerns of the Welsh people were ignored by the Welsh government in favour of unqualified support for the French nuclear industry and their construction of a nuclear power station in England.”

Note: Petitions in support of the Campaign were signed by over 170,000 people

The RIFE reports are available here.

Tables produced by the Stop the Cardiff Mud Dump campaign from the RIFE reports are presented below. Further background information follows the tables.

Note: not analysed for at any other sites or in any other media

There are NO data on the impacts of dump activity at the Cardiff Bay marine disposal site.

Due to the long term failure of Natural Resources Wales (NRW) and the Welsh Government to insist on comprehensive and long term monitoring of south Wales coastal environments for the nuclear wastes discharged by the eight reactors historically sited on the Severn Estuary/Bristol Channel, there are no pre-existing baseline data for such radio-nuclides along the south Wales coast. Hence any commentary from the Welsh Government or NRW on the risks or impacts of those radioactive wastes on Welsh coastal environments, wildlife or human communities has never been based on any form of relevant regional empirical scientific data.

Despite the Campaign’s requests for a postponement of the Dump in order for Welsh Government and the NRW to gather baseline radioactivity data along the south Wales coast — with a major focus on those nuclides known to be present in the sediment to be dumped (plutonium and americium, cobalt-60, strontium, organically bound tritium, etc) —  the nuclear industry was permitted to carry out the dump without any such information being gathered.

Subsequently no form of radioactivity monitoring has been initiated by Welsh Government or the NRW in order to observe what impact the dump has had on adjacent coastal sediments and communities, despite the fact that the dump took place in close proximity to South Wales’s most densely populated coast and capital city.

As the Cardiff Mud Dump Senedd Petition Campaign had warned, this has resulted in a major data gap, especially for the coastlines and communities closest to the dump site.

However RIFE, the UK-wide annual marine monitoring programme, which focuses on areas close to existing (active and de-commissioned) nuclear sites, has provided relevant information which clearly shows a significant, and time relevant, increase in some of the radioactive species known to be present in the dumped sediment.

Cian Ciarán of the band Super Furry Animals, in a protest against the first round of radioactive mud dumping. (Photo: Cian Ciarán, Twitter)

During 2017 and 2018 the French nuclear company EDF began major excavation works in the intertidal zone of Bridgwater Bay (Somerset) in order to facilitate the construction of sub-tidal pipelines for the discharge of liquid radioactive wastes to sea, the intake of cooling water and docking facilities for the proposed double reactor nuclear site at Hinkley Point C.

Along with permission to undertake these works, EDF was also granted permission by the Welsh Government and National Resources Wales to dump up to 300,000 tonnes of radioactive sediment from Bridgwater Bay at sea, in Cardiff Bay, within 2 kms of the Cardiff sea front.

In response, concerned Welsh citizens launched a vigorous protest campaign, through the National Assembly’s Senedd Petition process, which was supported by many thousands of Welsh petitioners.

Noting that there was significant absence of baseline data and information about the likely fate of the radioactivity in the sediments and its impact on south Wales coastal environments and communities, the initial intention of the Campaign and its supporters was to seek a delay to the Dump in order to acquire more information.

This view was strongly supported by Assembly Members sitting on the Senedd Petitions Committee (who had the opportunity to hear evidence from marine radioactivity consultant Tim Deere-Jones who had initiated the petition, and from EDF and NRW who opposed it), and concluded that the petitioners request was valid enough to be the subject of a Plenary Debate in the National Assembly.

During the subsequent Plenary Debate in the Senedd , the great majority of Assembly Members who contributed, spoke in support of the Petitioners intentions. However, the then Environment Minister (Leslie Griffith), with the support of the Welsh Government, ignored the expressed wishes of the majority of speakers and the Welsh public and permitted the dump to take place.

RIFE reports on the Somerset coast

Annual reporting of the monitoring of marine environmental samples from sites close to and downstream of the Hinkley Point construction site are recorded in the annual UK government-funded RIFE reports which report concentrations of a range of radionuclides discharged to sea from the site.

Many of the radionuclides recorded by the RIFE reports are also those reported as present in the dredge spoil dumped into Cardiff  Bay. This is particularly true of those radionuclides known to strongly associate with sediments including cobalt-60, americium-241, plutonium and organically bound tritium.

The method of sample gathering (surface scrapes usually not more than a few cms deep) and the nature of the sites (intertidal with easy access from the shoreline and roadways) from which sediment samples are taken is consensually agreed to generate results reflective of the most recent annual depositions of radioactivity discharged to sea from the Hinkley nuclear site, or released as a result of unusual activity such as dredging and construction.

Since the annual reporting of Hinkley reactor operations indicates nothing unusual, it may be safely concluded that the greatly increased concentrations of radioactivity recorded are the result of the construction and dredging activity discharges initiated and carried out during 2017 and 2018.

5 Comments on “Stirring up trouble”