Posted on March 1, 2020 by beyondnuclearinternational

Half the US population favors the nuclear abolition treaty

Although today’s public protests against nuclear weapons can’t compare to the major antinuclear upheavals of past decades, there are clear indications that most Americans reject the Trump administration’s nuclear weapons policies.

Since entering office in 2017, the Trump administration has withdrawn the United States from the nuclear agreement with Iran, scrapped the Intermediate-Range Nuclear Forces (INF) Treaty with Russia, and apparently abandoned plans to renew the New START Treaty with Russia.

After an overwhelming majority of the world’s nations agreed on a landmark UN Treaty on the Prohibitions of Nuclear Weapons in July 2017, the Trump administration quickly announced that it would never sign the treaty. 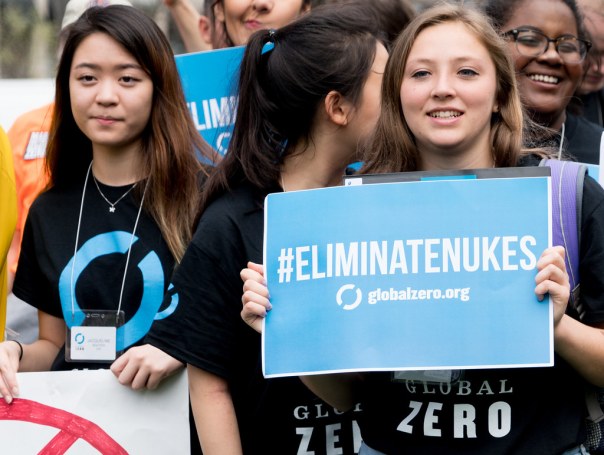 Popular support for a nuclear ban is widespread. (Photo: “Nuclear Summit protest” by vpickering is licensed under CC BY-NC-ND 2.0)

Moreover, the Trump administration has not only failed to follow the nuclear arms control and disarmament policies of its Democratic and Republican predecessors, but has plunged into a renewed nuclear arms race with other nations by championing a $1.7 trillion program to refurbish the entire U.S. nuclear weapons complex.  Perhaps most alarming, it has again and again publicly threatened to initiate a nuclear war.

These policies are quite out of line with U.S. public opinion.

The Center for International & Security Studies at the University of Maryland also reported overwhelming public support for nuclear arms control and disarmament agreements.  Polling Americans in early 2019, the Center found that two-thirds of respondents (including a majority of Republicans) favored remaining within the INF Treaty, while eight out of ten respondents wanted the U.S. government to extend the New START Treaty.

Indeed, more than eight out of ten U.S. respondents backed new nuclear arms control treaties with Russia―findings similar to those of the Chicago Council, which reported that 87 percent of American respondents to a poll in early 2019 wanted the United States and Russia to secure a further nuclear arms limitation agreement.

But just how much arms control and disarmament do Americans want?  It might come as a shock to the many pundits in the mass media who have never mentioned the 2017 UN Treaty on the Prohibition of Nuclear Weapons (TPNW), but roughly half the U.S. population supports nuclear abolition along the lines of the treaty.

According to a YouGov opinion survey done in late September 2019, 49 percent of American respondents thought the United States should work with other nations to eliminate all nuclear weapons in the world. Only 32 percent disagreed, while 19 percent said they didn’t know.

When it comes to actual use of nuclear weapons, Americans are even clearer in their preferences.  A YouGov/Huffington Post poll in August 2016 found that 67 percent of American respondents thought the U.S. government should never initiate a nuclear attack.  In mid-2019, Zogby Analytics surveys of American respondents in key primary states also discovered very high levels of opposition to first use of nuclear weapons.

Not surprisingly, Donald Trump’s angry, impulsive behavior, coupled with his threats to launch nuclear attacks upon other nations, has left many Americans uneasy.  This might help to explain why 68 percent of Americans surveyed in early 2019 by the Center for International & Security Studies backed congressional legislation requiring that a president, before ordering a nuclear attack upon another nation, consult with congress and secure a congressional declaration of war upon that nation.  As the U.S. congress has not passed a declaration of war since 1941, this opinion, too, provides a substantial challenge to current U.S. nuclear policy.

There are other indications, as well, that the American public wants a new approach.  In July 2019, the U.S. Conference of Mayors, at its 87th annual meeting, unanimously passed a resolution calling on all U.S. presidential candidates “to pledge U.S. global leadership in preventing nuclear war, returning to diplomacy, and negotiating the elimination of nuclear weapons.”  Calling for negotiations to replace the INF Treaty and to extend or replace the New START Treaty, the resolution demanded that candidates support the Treaty on the Prohibition of Nuclear Weapons and renounce the option of first use of nuclear weapons.

Yet another sign of public discontent is the emerging Back from the Brink campaign, supported by numerous peace, environmental, religious, health, and other organizations.  Endorsed by dozens of cities and towns across the country, it has also received the official backing of the state legislatures of California and Oregon, as well as of the New Jersey State Assembly and the Maine State Senate.

The campaign calls on the U.S. government to “lead a global effort to prevent nuclear war” by: “renouncing the option of using nuclear weapons first”; “ending the sole, unchecked authority of any U.S. president to launch a nuclear attack”; “taking U.S. nuclear weapons off hair-trigger alert”; “cancelling the plan to replace its entire nuclear arsenal with enhanced weapons”; and “actively pursuing a verifiable agreement among nuclear-armed states to eliminate their nuclear arsenals.”

Dr. Lawrence Wittner is Professor of History Emeritus at SUNY/Albany and the author of Confronting the Bomb (Stanford University Press).

This article first appeared on History News Network and is republished with kind permission of the author.

← This is not your grandfather’s planet
The price of staying →