Posted on March 29, 2020 by beyondnuclearinternational Prime Minister Shinzo Abe and the “nuclear village” hoped the Olympics would normalize Japan’s radiological aftermath. But the Fukushima effect has meant zero nuclear exports, leading the government to shore up the nuclear industry at home at the expense of renewables.

By Cassandra Jeffery and M.V. Ramana

Last week, International Olympic Committee President Thomas Bach and Japanese Prime Minister Shinzo Abe agreed to delay the 2020 Summer Olympic Games because of the COVID-19 pandemic. However, they will keep the Olympic flame burning in Fukushima Prefecture. The torch relay route was to have begun there, a poor decision, given the meltdown of multiple reactors in Fukushima nine years ago in March 2011.  While radiation levels may have declined since 2011, there are still hotspots in the prefecture, including at the sports complex where the torch relay would have begun and along the relay route.

The persistence of this contamination, and the economic fallout of the reactor accidents, should remind us of the hazardous nature of nuclear power. Simultaneously, changes in the economics of alternative sources of energy in the last decade invite us to reconsider how countries, including Japan, should generate electricity in the future.

Japan is not alone in having experienced severe nuclear accidents. The 1986 Chernobyl accident also contaminated very large areas in Ukraine and Belarus. As in Japan, many, many people had to be evacuated, about 116,000 according to the 2000 report of the United Nations Scientific Committee on the Effects of Atomic Radiation. Many of the evacuees never did return; thirty-four years after the accident, thousands of square kilometres remain closed off for human inhabitation.

Events such as these are, naturally, traumatic and result in people viewing nuclear power as a risky technology, a view that has led to persistent and widespread public opposition around the world. 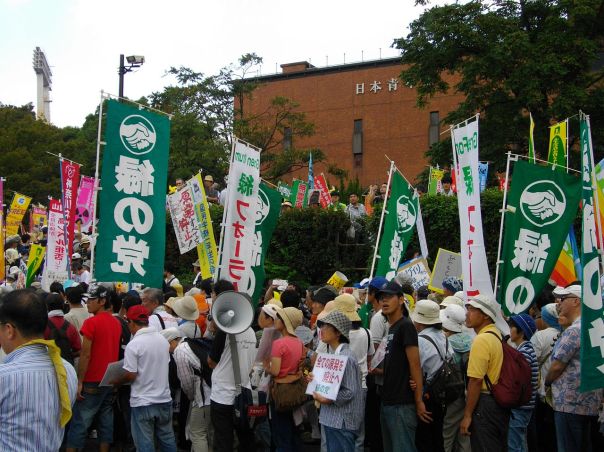 There is widespread opposition to nuclear power in Japan as well as around the world. (Photo: 保守 for Wikimedia Commons)

This opposition is evident in Japan too, where opinion polls show overwhelming lack of support for the government’s plans to restart nuclear plants that have been shut down after the Fukushima accidents. One poll from February 2019 found 56 percent of respondents were opposed to resuming nuclear operations; only 32 percent in favour of resumption. Other polls show significant local opposition, one example coming out of the Miyagi Prefecture, where some local residents have filed an injunction to ban the Miyagi governor from approving a utility plan to restart a nearby reactor.

Even the Japan Atomic Energy Relations Organization, which aims to promote nuclear power, finds that only 17.3 percent of survey respondents prefer nuclear energy, with much larger majorities preferring solar, wind, and hydro power.

The costs of dealing with such accidents are immense. Estimates for the Fukushima disaster range from nearly $200 billion to over $600 billion. Estimates for the costs imposed by the Chernobyl accident amount to nearly $700 billion. In 2013, France’s nuclear safety institute estimated that a similar accident in France could end up costing $580 billion. In Japan, just the cost of bringing old nuclear power plants into compliance with post-Fukushima safety regulations has been estimated at $44.2 billion.

Even in the absence of accidents and additional safety features, nuclear power is already very expensive. For the United States, the Wall Street firm Lazard estimates an average cost of $155 per megawatt hour of nuclear electricity, more than thrice the corresponding estimates of around $40 per megawatt hour each for wind and solar energy. The latter costs have declined by around 70 to 90 percent in the last 10 years.

In the face of the high costs of nuclear power—economic, environmental, and public health—and overwhelming public opposition, it is puzzling that the Japanese government would persist in trying to restart nuclear power plants.

To explain his support for the technology, Prime Minister Shinzo Abe claims that the country cannot do without nuclear power, especially in view of climate change concerns. The claim about the necessity of nuclear power makes little sense. Since 2011, the country has been generating only a fraction of the nuclear electricity it used to generate, and yet the lights have not gone off in Japan.

Further, starting in 2015, Japan’s total greenhouse gas emissions have fallen below the levels in 2011, because of “reduced energy consumption” and the increase in “low-carbon electricity.” The latter, in turn, is because of an increasing fraction of renewable energy in electricity generation, a factor that could play an important role in the future.

Some, including the Global Energy Network Institute and a group of analysts led by Stanford University’s Mark Jacobson, argue that Japan could be 100 percent powered by renewable energy. Regardless of whether Japan reaches that goal, there is little doubt that Japan could be expanding renewable energy, and that increased reliance on renewables makes economic and environmental sense.

Instead, the Abe government seems to be involved in lowering incentives for the development of solar energy, and instead promoting nuclear power. The government has also increased the financial assistance retainer for Tokyo Electric Power Company, the company that operated the Fukushima Daiichi plant from ¥9 trillion to ¥13.5 trillion. This amount is borrowed from banks and the interest costs on this retainer will be paid by Japanese taxpayers. 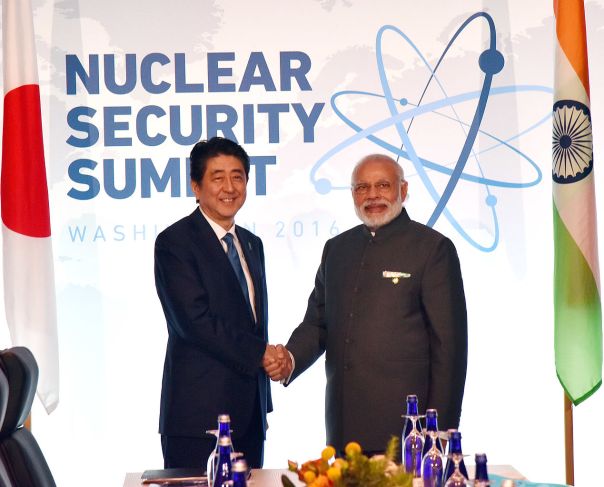 Japan’s prime minister, Shinzo Abe, shown with Indian prime minister, Narendra Modi, is clinging on to nuclear power for export, but so far there are no orders. (Photo: Prime Minister’s Office, Government of India/Wikimedia Commons)

Efforts by Prime Minister Abe to support the failing and flailing nuclear sector in Japan are indicative of the significant political power wielded by the “nuclear village,” the network of power companies, regulators, bureaucrats and researchers that control nuclear and energy policy. The actions of the nuclear village is one of the factors responsible for the Fukushima accident.

Indeed, the Rebuild Japan Initiative Foundation’s Independent Investigation Commission, traced the accident to, among other things, the presence of “sweetheart relationships and revolving doors that connected the regulatory bodies and electric companies, academics, and other stakeholders in the nuclear community.” Such relationships also exist between institutions involved in energy planning and the nuclear community, which accounts for some of the reluctance on the part of Japan’s energy policy makers to let go of the nuclear dream.

Nuclear sweethearts aside, Prime Minister Abe has another problem; his economic agenda, dubbed “Abenomics” by many, involves exports “of nuclear components and technology, as well as conventional arms” as an important component. So far, despite many trips to various countries by Prime Minister Abe, Japan has yet to export any reactors in the last decade; a project with the most likely client, Turkey, collapsed because of high costs. Because Prime Minister Abe and the nuclear village sees the lack of sales as a problem, they seem to want to shore up the domestic nuclear industry and “prove” that Japan has fully recovered from the 2011 nuclear disaster. But, are the financial costs and the effort worth the risk?

It is not a stretch of the imagination to regard Abe’s decision to host the Olympics in the first place, and to plan to start the torch relay in Fukushima, as mere pretense that all is well in the prefecture, despite widespread contamination that continues since 2011. Restarting nuclear reactors or constructing new ones, should that ever happen, only increases the likelihood of more nuclear accidents in the future and raises the costs of electricity. This is especially irrational when alternative, less risky, sources of electricity have become far cheaper than nuclear energy.

The COVID-19 pandemic has posed a tremendous challenge to public health and the wellbeing of citizens. In the wake of this shock, we are seeing the opening up of some much-needed space to reflect on how concentrations of economic and political power negatively affect citizens daily.

The push for nuclear power by the Japanese government and other governments, even in the face of citizens’ expressing their opposition to such facilities and activities, is another illustration of the effect of concentrated economic and political power. It is time to move away from both nuclear power and societies controlled by concentrated economic and political power, and instead shift toward more democratic systems.

An earlier version of this article, now updated to reflect the postponement, appeared in the Japan Times.

Headline photo of Olympic flame by Ververidis Vasilis for Shutterstock.

Cassandra Jeffery is a graduate student of public policy and global affairs at the University of British Columbia. She is the recipient of a Simons Award in Nuclear Disarmament and Global Security. M.V. Ramana is the Simons chair in disarmament, global and human security and director of the Liu Institute for Global Issues at the School of Public Policy and Global Affairs, University of British Columbia. He is a member of the International Panel on Fissile Materials, the Canadian Pugwash Group, the Global Council of Abolition 2000 and the team that produces the annual World Nuclear Industry Status Report.

← Nuclear lessons from the coronavirus
Out of control? →