Posted on May 11, 2020 by beyondnuclearinternational

A new film — The Atomic Soldiers — lets the veterans who witnessed the Hood test in Nevada tell their own stories. But the painful memories sometimes choke their recollections, leaving long and moving silences in place of words. “You don’t send 14,000 troops through ground zero and not call it anything but genocide,” says one.

The Atomic Soldiers, Morgan Knibbe’s profoundly moving 22-minute documentary, opens with silence. The camera focuses on a series of veterans of US atomic testing, and each of them looks back, some directly at the camera, some unable to. Their pain is palpable. When they begin to speak, the emotion in their voices swells.

Although each man was exposed to the radiation blasted from the US atomic tests more than 60 years ago, it’s clear that the experience sears through each of them like it was yesterday.

It is the pain not only of the very real physical suffering, but of their involvement in the tests themselves, which they were forced to keep entirely secret. “I never told anybody. Not my parents, not my brother, not my best friends, not my wife. Nobody,” says Rex L. Montgomery (none of the veterans is captioned during the film but they are identified at the end.)

You can watch the film here:

On the morning of July 5, 1957, the US detonated the biggest bomb ever blown up in the continental United States. It was 74 kilotons of hell, part of the Plumbbob series of detonations at the Nevada Test Site. They called it Hood. US soldiers were marched into a trench about a mile from the blast with scant protection. None of them knew what was about to happen.

“It was completely daylight at midnight,” says Frank Nunziata. “Brighter than the brightest day you ever saw.”

They could see the bones and blood vessels in their hands and arms. It was, they said, like an x-ray.

“When the wave hit me, it knocked me over,” said Jim Dangerfield.  People screamed, ran and panicked, they said. The heat was extreme. The blast sent beads of glass-like shrapnel piercing through their skin. Some threw up.

Then they saw the mushroom cloud, constantly changing colors, strangely beautiful. Yet sickening in its lethality. Some can barely describe it without tears. And “the unforgettable sound. It roared and roared and roared. And men yelling, confused,” recalled Montgomery.

Then hell rained down on them, in the form of boulders and rocks and stinging sand turned to glass. And then they waited until the dust settled, both literally and metaphorically. 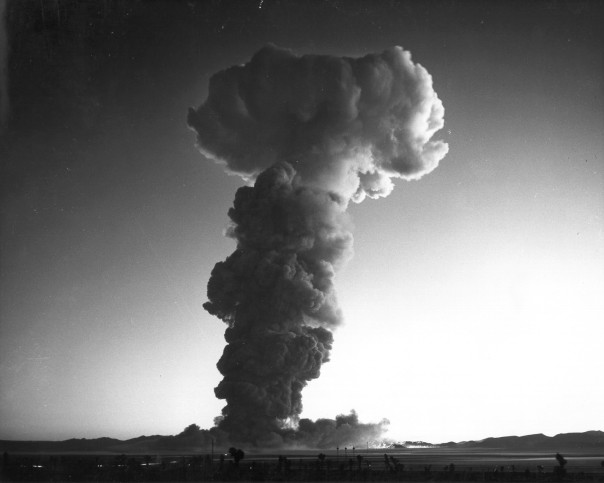 Heavy equipment had been blown to smithereens. “When you see a bulldozer blade ripped like paper, you know it’s powerful,” said Joseph Fennucio.

Men who appeared suddenly to be wearing “dangling uniforms” had in reality had their flesh ripped from their bones.

And while Charles Naimone says, “That was the most breathtaking thing I have ever experienced in my life. I am happy I was able to be there for that series of tests”; he adds: “I would never do it again. I would go to Canada first.”

Many sentences in this film remain unfinished. The memories are too painful, the emotion too wrenching. Words simply fail. The men remain haunted by their innocent, unwitting participation as nuclear “guinea-pigs.”

We hear about the relentless manifestations of lumps and tumors and other strange maladies caused by exposure to ionizing radiation. And then the battle for compensation, rebuffed at every turn by the very government that put them at risk in the first place.

“I didn’t want to see anybody, I didn’t want to meet anybody, I was turning into a loner,” said Joseph Mondello, who suffered hair loss, spine problems and strange weight gains eerily similar to the same phenomenon experienced by some of the sailors on the USS Reagan that sailed into the path of the Fukushima-Daiichi radiation plume shortly after the nuclear power plant accident there. Those veterans, like their predecessors, have struggled and largely failed to achieve federal compensation.

The trauma led some to alcoholism, insomnia, hallucinations, nightmares; others to depression.  Bright lights triggered flashbacks. And then there was that other silence, the one enforced on them. As they begin to describe that, their voices become tinged with quiet anger.

Consequently, “what you saw stays with you forever,” said Dangerfield.

“They put the fear of God in you,” recounted Ronald T. Benoit. “When you are talking about treason, that you can be executed, I mean to go to jail is one thing but treason….”

Today, finally free to talk, the Hood veterans call it “a coverup”, or worse, says Dangerfield, “mass genocide and I mean it that way, I think it can only be described as genocide. You don’t send 14,000 troops through ground zero and not call it anything but genocide. Somebody knew what was occurring.”

Over the 50 years that followed the testing, speculates Nunziata, more people may have died as a result than all those killed at Hiroshima and Nagasaki.

And then the emotion rushes back in. “I suspect that nobody’ll give a damn when I’m gone,” said Feurt. “There won’t be any genetics study done at my autopsy to determine whether or not anything was passed on.” He pauses, and the tears come.

“Well they knew everything that was gonna happen and what danger was involved in it,” said Fed Walden. “They’re just hoping you all die before they have to do anything.”