Posted on July 19, 2020 by beyondnuclearinternational 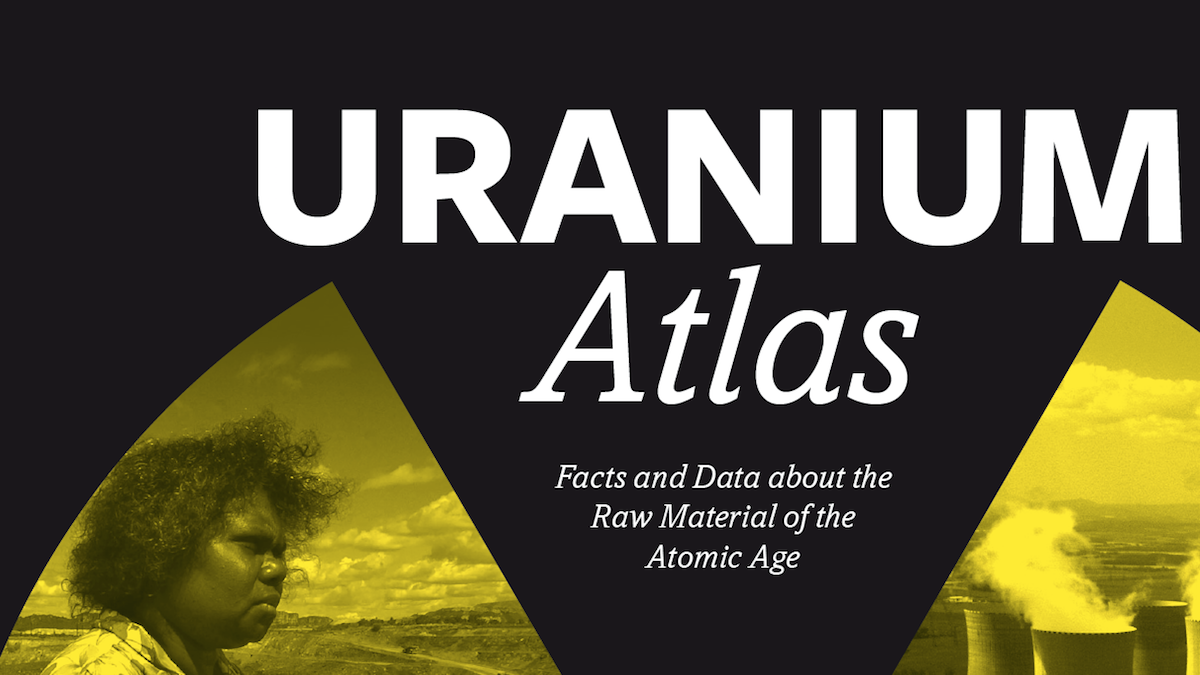 What is it? Where does it come from? And who, if anyone, benefits?

This week marks the official launch of the Uranium Atlas, English edition, with new and expanded content. Beyond Nuclear was part of the editorial team, which includes the Nuclear Free Future Foundation, (which earlier published a German language edition) the Rosa Luxemburg Stiftung and IPPNW Germany. Beyond Nuclear is grateful for the generous support from Honor the Earth, which sponsored the printing and distribution costs for North American readers of the Uranium Atlas.

The Uranium Atlas is, as its title suggests, a collection of maps indicating everywhere that uranium was — or is still — extracted and used. It effectively maps the journey of uranium, from mining and milling to the production of electricity and nuclear bombs, the testing and use of the latter, and the unsolved and unending problem of the radioactive waste left at the end of this (mis)use.

The Atlas is as much a series of maps as it is a narrative of discrimination and colonial abuse; of people, their lands and their values.

We learn that Indigenous peoples on different continents use similar prophetic imagery to warn against extracting uranium from the ground.

In Australia it is the rainbow serpent, whose sleep must remain undisturbed or forces will be unleashed with dire consequences.

For the Dene of Canada it was a cautionary warning of sticks dug from the ground to be carried away by an iron bird who would rain death on others far away.

For the Western Shoshone, it is the serpent swimming westward at Yucca Mountain, Nevada, where the end product of uranium’s use — high-level radioactive waste — could be dumped.

The price for not leaving it in the ground is played out across the pages of the Uranium Atlas, with bright graphics and concise narratives that tell the tragic consequences of that mistake. Wherever uranium has been used, processed or discarded, it can be found in the Atlas.

It was compiled by a number of authors from across the world, vetted by experts, with editors and translators working in Germany and in the US. It is a truly collaborative effort, reflected in the list of authors and acknowledgments.

Whether it’s the history of colonialism, or the deadly pathway of uranium and its decay products through our bodies, the maps and graphics in the Uranium Atlas bring home the nightmare of this nuclear genie, out of the bottle and dispersed across our planet forever.

Included in the Atlas are not only the routine uses of uranium, but the disasters it spawned, and the corporate irresponsibility that left lands and peoples contaminated forever even after some of the associated industries ceased their operations.

And it addresses the futility of uranium today, its low price making nuclear energy even less affordable and financially unattractive. Yet the industries uranium spawns are kept alive by the power of corporate lobbying and government corruption.

When we turn our lights on, we may not think about how that electricity reached us. The Uranium Atlas shows us that it was on the backs of countless Indigenous, disenfranchised communities across the world, often treated as guinea pigs and then abandoned to suffer the terrible, long-term health consequences.

Whether it is the IAEA denying Chernobyl, or governments ignoring victims of uranium mining, atomic testing, or the use of depleted uranium in weapons of war, the map of uranium is a road that should never have been traveled at all.