Posted on August 16, 2020 by beyondnuclearinternational 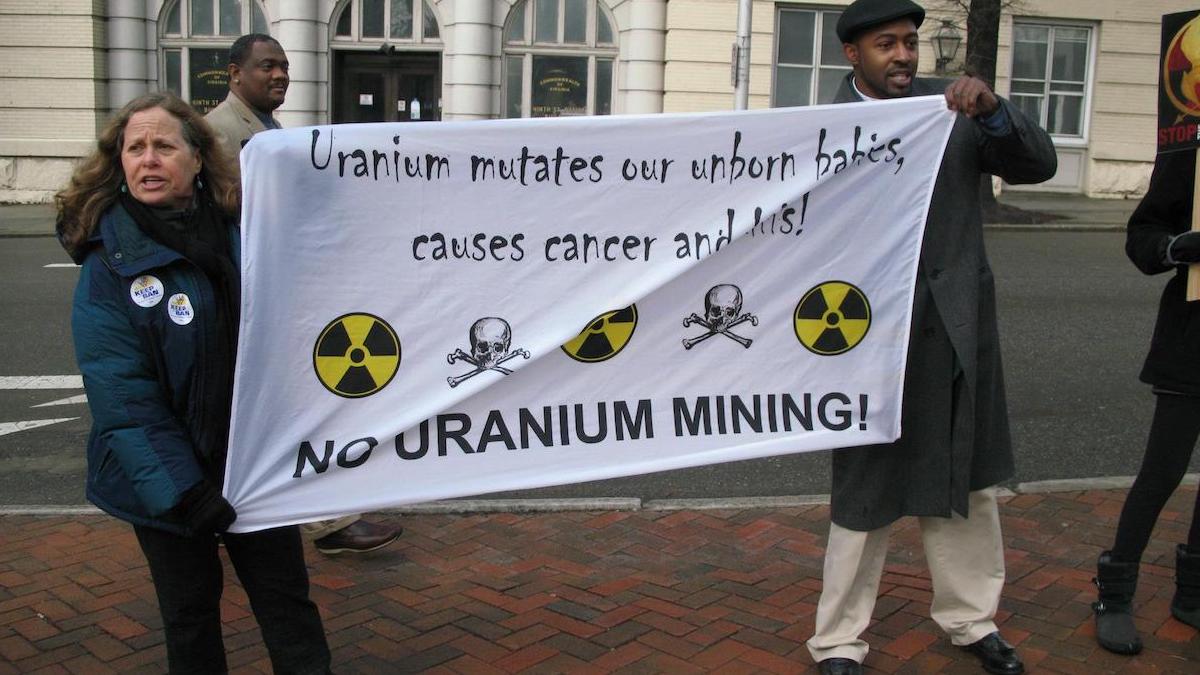 On a damp January day earlier this year, I went with two members of a group called Keep the Ban (KTB) on a little tour through the Coles Hill area, just outside the town of Chatham, Virginia.

Coles Hill is the site of this country’s largest uranium deposit — a surprising discovery given most US uranium mines are to be found in the arid climate of the American Southwest.

Keep the Ban is a coalition of environmental groups and Virginia residents organized in 2008 to uphold Virginia’s moratorium on uranium mining and keep the Coles Hill uranium mining threat at bay. With good reason. As we surveyed the sodden terrain, there were so many reminders of why uranium mining is a bad idea anywhere, but especially here.

The Coles Hill area is criss-crossed with streams, ponds, springs, creeks and rivers. On that January day, the brown hay fields, flecked with patches of new-growth green, were singing with a chorus of peepers. There was standing water everywhere, while fallen trees decayed quietly on the banks of gurgling streams, all of it testimony to the frequent torrential rains that occur in this area.

The next day, schools were forced to close early and remained closed the day after that due to flooding.

Assurance that uranium mining could be done safely in this environment is a hard sell.

But a company called Virginia Uranium, Inc. (VUI) keeps trying — and going to court — determined to overturn the moratorium on uranium mining in Virginia that has stood since 1982.

The land beneath which the uranium lies has been in the Coles’ family since colonial times, a King’s Grant. What had served as valuable pasture land for centuries is now leased to VUI, only nominally a Virginia company, but in reality an international corporation headquartered in Canada.

VUI went public with its plans to mine the Coles Hill uranium deposit in 2007. But in December 2011, just as the company’s legislative push got underway, the National Academy of Sciences (NAS) issued a damning report on Uranium Mining in Virginia.

The NAS voiced strong reservations about the health and safety aspects surrounding uranium mining in such a wet climate, and the regulatory inexperience within the Commonwealth, casting doubt on VUI’s safety claims.

These findings may have swayed legislators when, as described by the Southern Environmental Law Center:

“The industry failed to secure the support it needed to introduce legislation to repeal the ban in the 2012 General Assembly, but it mounted an intensive lobbying effort and introduced legislation in 2013.

“After a groundswell of opposition from local governments and business, health, and environmental groups, the legislation was pulled due to lack of support.

“Turned away by the General Assembly the company filed a federal lawsuit arguing Virginia lacked the authority to ban uranium mining. The United States Supreme Court on June 17, 2019 upheld Virginia’s ban on this dangerous practice.”

Undeterred, VUI went back to civil court, with one more, hopefully last ditch, attempt to reverse the ban ruling and get the green light to mine.

In his decision, Judge Dotson acknowledged that the ban does damage Virginia Uranium’s property.

However, he went on to say, “There really can be no argument that a moratorium on uranium mining, which is an inherently dangerous activity with potentially dangerous interdict effects, achieves the Commonwealth’s rightful duty to protect the public from injury and to protect the health, safety, and welfare of the citizenry.”

He added: “There is substantial and justifiable fear of irreparable harm if uranium mining were to be allowed in the Commonwealth.”

The 2015 Wise County suit had been set aside pending arguments in the U.S. Supreme Court. There, VUI had argued that control over uranium mining should be a federal matter regulated by the Nuclear Regulatory Commission via the Atomic Energy Act. However, Virginia’s claim of state regulatory control under the 10th Amendment prevailed.

The Coles Hill deposit, in Virginia’s Pittsylvania County, has been an unending nightmare for county residents and the Commonwealth alike. While the Coles deposit remains nestled safely 1,000 feet in the ground, there has been a storm brewing above since its discovery in the late 1970s. Recognized as a valuable commodity when perpetually fluctuating uranium prices are high, there has been a relentless push to monetize the Coles Hill asset.

VUI insisted the uranium could be mined safely. But once locals became aware there was a renewed interest in mining the deposit, and a corporation had been formed selling stock in the venture, grassroots organizations sprung up, organizing as the statewide Keep the Ban coalition.

KTB worked tirelessly to convince Virginia’s lawmakers to uphold the ban, including collecting signatures on petitions (more than 100,000 people signed), going door to door and tabling at events from flea markets to wine festivals.

These coordinated efforts brought speakers from around the country to educate local citizens on the impact a huge mining and milling facility would have on the immediate area and beyond. Hydrogeologists, environmental specialists and waste containment engineers educated audiences on what could be expected if the Coles Hill uranium mine and mill was permitted.

To illustrate the effect mining would have in dispersing any number of soil borne contaminants by wind, KTB activists did a balloon release with response cards from Coles Hill. The results were shocking. Within hours, a call came from Richmond, 150 miles away, near the capitol building, where one of the balloons had landed.

In the next few weeks, responses from as far away as New Jersey were evidence that dangerous radiation from massive excavation and tailings pits would disperse not only across the local countryside but way beyond it.

Surface water and rainfall also presented potential hazards, especially to groundwater. VUI drilled many test bores for core samples breaching 1,000 feet and deeper. During this process, crews were sent to take samples from wells at nearby homes. The results were frightening. Lead, arsenic, mercury, potassium and other contaminants were dislodged and ended up in neighbors’ wells in concentrations above advisable limits for consumption.

These findings shed light on another reality that VUI had hoped to hide. Contrary to the company’s efforts to portray the uranium site and surroundings as some kind of vast rural wilderness, there are numerous residents in the area. The main businesses are cattle and dairy farms. An excavation on the scale of the proposed Coles Hill uranium mine would be totally incompatible with human or animal life.  The depth of the ore body would produce a literal mountain of overburden if mined.

The battle over Coles Hill left painful scars for some in the community, as those who had been lured by VUI to invest in the venture depended on the corporation to make a profit. Lofty promises of hefty returns were a selling point during the uranium bubble. Sadly for these investors, the bubble burst before a legal pathway was cleared and now many folk’s life savings are tied up in stock that will remain pretty much worthless.

Possibly, those profits were optimistic fantasies all along. The Coles Hill deposit, while large, is of poor quality, averaging just .16% uranium, compared to some Canadian ores at 16% uranium. Consequently, most of what would come out of the Coles Hill mine would be 99.84% dross, destined for a massive tailings pile. Containing those tailings from seeping into waterways would be a near impossibility.

Furthermore, uranium prices that hovered near $70 / lb. in the mid 2000s, now languish at around $25 -35 / lb. This is substantially lower than company projections at the time for a break even point to produce the ore. While VUI may hope to blame the KTB folks for their defeat, the volatile uranium prices are typical of the boom and bust cycle of mining. Despite assurances of safety and containment, projects such as this are frequently abandoned during price dips and left unsealed with corporations claiming bankruptcy.  Private profit, public liability.

The decade between 2008 and 2018 saw a myriad of tactics on either side of the battle. VUI sought to win the hearts and minds of the local population with a variety of stunts and swag. They visited every event with their “Uranium-mobile”, a 16′ black trailer outfitted as a rolling exhibit extolling the virtues of uranium mining where your kiddies could experience uranium up close. Then to the table to get your VUI t-shirt and tote bag! At their peak push, VUI sent the U-mobile on a tour of the county’s convenience stores, disseminating pro-U propaganda and soliciting signatures supporting a repeal of the ban.

For Chatham, Virginia, the closest town to the Coles Hill deposit, the high drama and intrigue of the uranium battle felt out of place. With one stoplight, a wealth of charming Victorian homes and a Jefferson-style courthouse, Chatham is more accustomed to hosting garden tours than a high pitched battle over property rights vs. forever radioactive pollution.

And while VUI tried to set up shop in the town, literally, their storefront, once plastered with a corporate logo and dubious claims of “Jobs for Virginia”, now includes a “For Rent” sign.

So, it is with total gratitude I greet Judge Dotson’s decision. I hope this is the end of the saga and we can all now rest easily.

Kay Patrick moved to Pittsylvania County in 2011 to enjoy retirement in a bucolic setting only to end up as a KTB activist living five miles from Coles Hill.