Posted on March 4, 2018 by beyondnuclearinternational 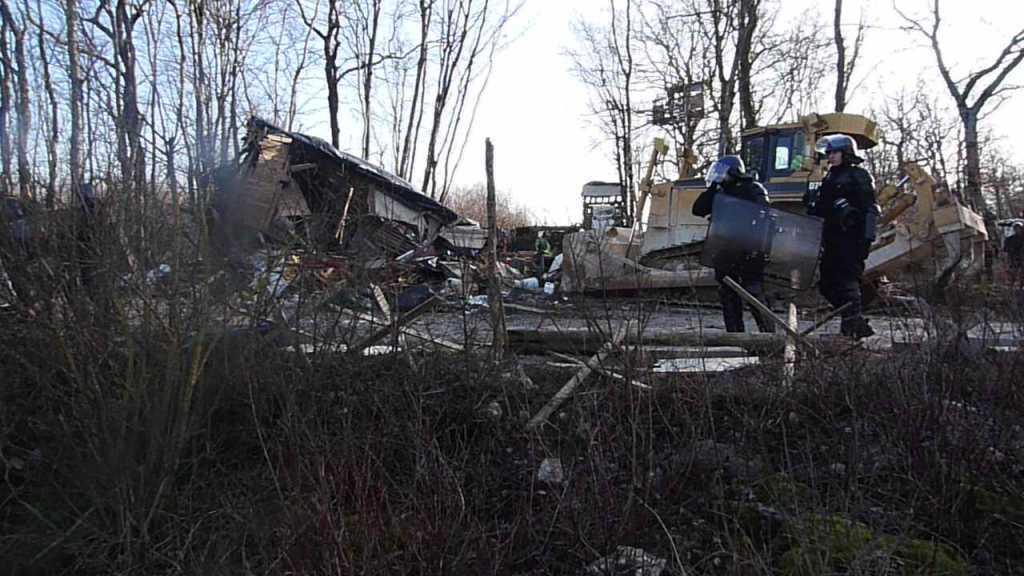 On February 22, the French government mounted a military-style assault on a small community of anti-nuclear activists who had been watchdogging, and living on, a site for the country’s proposed high-level radioactive waste dump in the Champagne-Ardenne region of France near the village of Bure. (Just over a week later, authorities were back to again remove protesters this time with tear gas.)

As many as 500 armed gendarmes in riot gear moved in at dawn, with bulldozers, trucks, helicopters, drones and chainsaws to confront about 15 occupiers, self-described “owls.” They had been living in tree houses and lookout towers for the past 18 months, keeping watch over a forest designated to be torn down for the country’s first high-level radioactive waste repository.

The treehouse “owls” were back in their perches the day after the raid.

The gendarmes broke down doors, tore down the tree houses, demolished encampments and dragged people away under arrest. To justify this stunt, the government of French president, Emmanuel Macron, claimed the zone was a ZAD — zone à défendre or zone to defend — used to justify clearing out what they define as a militant or anarchist occupation that is blocking a development project.

The activists say that the raid was premature. While a court decision late last year had approved eviction from the Lejuc Wood, that decision came before all legal cases underway had been decided — including whether Andra, the French radioactive waste management agency, actually has ownership of the wood.  Andra is also supposed to conduct an environmental survey before starting any work in the wood. Evictions were not supposed to take place in winter, Andra is prohibited from working until a March nesting period is over, and the agency lacks a permit to clear the forest, say the activists.

The raid was authorized by French Interior Minister Gérard Collomb, who has come under fire for his crackdown on refugees and the expulsion of asylum seekers, a comparison that activists are quick to point to as a further sign of a repressive regime in action.

French anti-nuclear activists are no fans of President Macron, either, whose position on nuclear energy is weaker even than his tepid predecessor, Francois Hollande. Any kind of meaningful French nuclear phaseout is very much off the table now, with Macron talking about “modernizing” some of the country’s aging and decrepit nuclear fleet even as a handful of reactors may still close.

But when Macron appointed Nicolas Hulot his Minister of Ecological Transition, some in the Green movement felt hopeful. A former journalist and Green party candidate, Hulot seemed to have all the right credentials to steer France along the long-neglected renewable energy path. In 2012, when Hulot ran as Green, he had called for a referendum on nuclear energy, in the wake of the 2011 Fukushima nuclear disaster in Japan. He was even photographed in 2016 holding a sign opposing the Bure radioactive waste dump.

Once in government, however, Hulot pronounced the Bure site the least worst option, a comment immediately denounced by the Bure Stop coalition who said Hulot had allowed himself to “get stuck in the nuclear quagmire” and had “renounced his commitment” to the anti-nuclear cause.

Longtime anti-nuclear campaigner, Stéphane Lhomme agrees. On the Bure raid, he commented: “the present government is behaving like its predecessors: it is putting itself at the service of the nuclear industry and launching a ridiculous military operation (500 gendarmes) for the evacuation of a ZAD….that doesn’t exist.”

Lhomme was one who never bought into what he viewed as greenwashing of Hulot’s image. Lhomme denounced Hulot in 2012 during his campaign, because Hulot’s long-running television show was “sponsored by the most polluting multi-nationals” and says now that Hulot was always “a faux environmentalist and imposter.” Indeed, a look at Hulot’s own foundation reveals it is sponsored by EDF, the main governmental nuclear utility.

The day after the raid, Hulot was forced to confront his anti-nuclear past and account for his current position. He was called out in parliament by eco-socialist member, Mathilde Panot, brandishing that 2016 anti-dump photo. “I don’t recognize you any more,” she proclaimed. “You cannot continue to bury your head in the sand, minister. My question is simple: where is Mr. Hulot?”

Hulot rose to answer her, dressed in a suit and tie in sharp contrast to the wooly sweater in the protest photo. And then he spoke:

“I don’t have the impression, fundamentally, to be at odds with my conscience,” he said.

The day after the raid, the “owls” were back in their trees.

This article first appeared on Counterpunch on February 27, 2018.