Posted on August 29, 2018 by beyondnuclearinternational

Update: A newly leaked report examines the possibility of France building six new EPR reactors starting in 2025, after a prolonged period of inactivity in the industry. The report was ironically commissioned by Hulot and economy minister, Bruno Lemaire, and concludes that France “cannot stop building” reactors in order to maintain industrial know how and provide jobs, according to the newspaper, Les Echos, which broke the story. The report’s finding may have contributed to Hulot’s decision to resign. However, the notion that France would build six more EPRs was met with derision by nuclear critics who pointed out that the French nuclear industry has been unable to complete even one EPR in either France of Finland, where both projects are years behind schedule and massively over-budget.

Is the departure of Nicolas Hulot significant?

Opinion in France is decidedly mixed about the sudden resignation of French environment minister, Nicolas Hulot. He made his announcement on a radio show, taking the government of centrist, Emmanuel Macron, by surprise.

Certainly, the ecological crown had sat uneasily on Hulot’s head throughout his tenure in government. He arrived there ostensibly from the activist ranks — he was also a journalist — and was thought to be strongly anti-nuclear. But when French gendarmes raided and destroyed an opposition encampment at the proposed high-level radioactive waste repository site in Bure last February, Hulot failed to come to the defense of the anti-nuclear activists, some of whom were arrested. Even when challenged in the French parliament for his silence, he bobbed and weaved, relying on evasive rhetoric.

Yet when he resigned on Tuesday, he claimed it was to stop “having to lie to myself” and told the radio program on which he made the announcement that nuclear power is “a useless folly.”

All smoke and mirrors, says long-time anti-nuclear activist and watchdog, Stéphane Lhomme of L’Observatoire du Nucléaire. “Nicolas Hulot has never taken any concrete action against the nuclear lobbies he pretends to fight,” Lhomme wrote on his blog.” He points out, as did Beyond Nuclear International in an earlier article, that Hulot’s foundation — Nature and Man — is funded by corporations, including EdF, the national nuclear utility.

Indeed, it could be EdF who will be doing the celebrating now that Hulot is gone, according to a Reuters article. The company’s share price rose by two percent on the announced resignation, and former EdF board member, Gerard Magnin, told Reuters that  “Hulot was the last remaining obstacle to a strategy with nuclear as the sole option for security of supply and carbon-free energy.”

Macron and his “neither Left nor Right” party, known as Republic on the Move, has proven to be as malleable as his predecessor, the Socialist party’s Francois Hollande, at first announcing he would reduce France’s reliance on nuclear energy to 50 percent by 2025, down from the current 75 percent, as Hollande had vowed. But Macron quickly capitulated to the power of the nuclear lobby, and pushed the timeline back a decade at least. A new timeline will be announced next year.

The French anti-nuclear network, Sortir du nucléaire, took a surprisingly conciliatory tone toward Hulot’s decision, saying in a press release that they “applaud the honesty and the political courage implicit in this decision.” The network praised Hulot for “denouncing the crushing weight of the nuclear lobby,” and stated that in a democracy it should be the people, not lobbies or a single, powerful leader who should set the direction of the country and its future.

Lhomme is not so sure that lobbyists are breathing a sigh of relief with Hulot’s departure. He asserts they never had anything to fear from Hulot — even as they declared him “enemy number one” — because he is “someone who talks a lot and takes no action.” 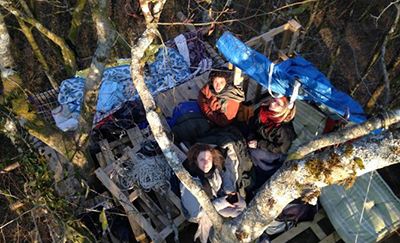 Nicolas Hulot did not come to the defense of the “owls” of Bure, some of whom were arrested protesting the proposed radioactive waste dump there.

At the end of the day, the fallout from Hulot’s resignation may change nothing, or it may further shake confidence in the Macron government. Jean-Luc Mélanchon, leader of the Leftist “Unbowed” party, who was a Macron opponent during the presidential elections, proclaimed in a tweet that the Hulot resignation marked the beginning of the “decomposition” of Macronism.

Whether Hulot was a champion of environmental causes stifled by a corporate-leaning government, or whether the ire of environmentalists finally reached his conscience, will play out in the coming months when we see what he does next.