Posted on March 11, 2018 by beyondnuclearinternational

Remorse (Munen in Japanese) is a short animated film directed by Hidenobu Fukumoto (whose pen name is Ikumasa Teppei), an illustrator from Hiroshima Prefecture. It tells the story of volunteer firefighters and the townspeople of Namie in Fukushima Prefecture during the time of the triple March 11, 2011 disasters when an earthquake and tsunami were followed by explosions and then meltdowns at the 4-unit Fukushima Daiichi nuclear power plant.

When the earthquake and tsunami struck, the firefighters at first went about their traditional task of search and rescue. But these efforts were tragically curtailed by the dangerous levels of radiation released by the Fukushima nuclear power plant disaster. Once they too had to evacuate, those trapped by the earthquake and tsunami in areas of high radiation had to be abandoned.

“Remorse” shows how many firefighters continue to feel haunted by “the feelings of the people who died under the debris believing that help would arrive.”

The film also brings home how nuclear power, in the time of a crisis, simply adds to the danger and impedes rescue.

Many of the characters in the film were voiced by locals, including firefighters and the Namie mayor. The opening shot shows one firefighter kneeling in apparent prayer, but in reality asking “forgiveness” from those people he could not save. 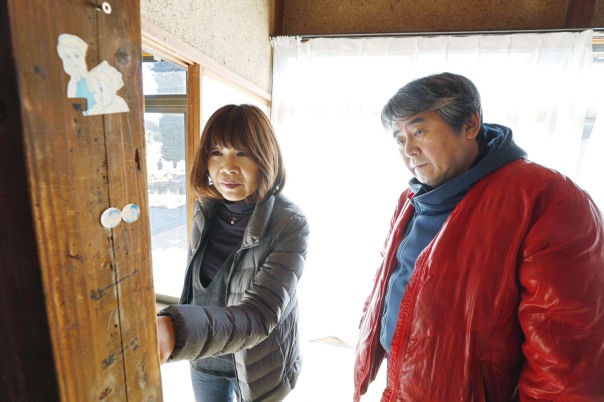 Later in the film we see scenes of evacuees, feeling the guilt of “running away” while their friends remained; of farmers forced to throw away abundant but now radioactively contaminated produce; of nuclear workers weighed down by responsibility for the catastrophe; and a nurse whose ambulance cannot deliver its patients to safety because the vehicle is deemed “contaminated.”

As one character says, “all this because of the nuclear power plant.”