Posted on March 10, 2019 by beyondnuclearinternational

Every Friday morning, a group of Japanese residents living and working in the UK gather outside the Japanese Embassy in London, and in front of TEPCO’s London headquarters. They are there to remind their government, TEPCO, and the world, that the March 2011 Fukushima nuclear power disaster is not over and its consequences will reach far into the future.

Now, as we arrive at the eighth anniversary, the group, along with other UK partners, is preparing to hold its annual series of events to once again raise the profile of a disaster the nuclear industry would like us to forget and the Japanese government tries to pretend is over.

The group calls itself Japanese Against Nuclear UK (JAN UK) and, says its website, it was “formed on the 3rd August 2012 with a desire to better inform the public in the UK and Japan about the damage caused by nuclear power and to highlight the catastrophic effects of nuclear accidents, as well as to make the public aware to the continued failings and ongoing suffering from the Fukushima Daiichi nuclear accident and the consequences for Japan and the world.” 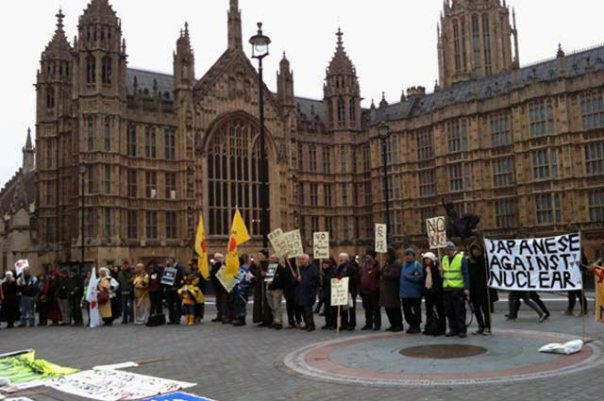 When we met together recently in a cozy London pizzeria, the members present offered this writer a warm welcome, and slipped graciously from their customary Japanese into their fluent English. Many have lived in the UK for decades, but the Fukushima disaster served as a wake-up call for activism, some for the first time on any issue. One member described how he had suffered from terrible asthma as a child, forcing him to live for years at a children’s hospital. Whenever he left the hospital, home visits would be cut short by the asthma’s return. The experience helped him empathize with the forced exile of the Fukushima evacuees and the devastation radiation exposure has wrought on their lives.

As JAN UK points out, “Hiroshima, Nagasaki, Bikini and Fukushima — it can be said that Japan has suffered from radiation exposure more than any other country in the world. JAN UK aims to share the horror of living with radioactive contamination and to end nuclear power in Japan, UK and the world by peaceful means with fellow world citizens.”

As the anniversary arrives, JAN UK, along with Kick Nuclear (London), Nos Voisins Lointains 3.11 (France) and CND will be back in front of the London embassy on Monday, March 11 offering silence and prayer, poetry, speeches, songs and speakers. Anyone can express their opinion through an open mic policy. Candles, torches and lanterns will add a Japanese touch to the event. 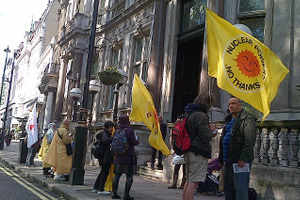 JAN UK and others hold a weekly vigil outside the Japanese embassy in London. (Photo: Jan UK)

She will be joined by Asami Yokota, another Fukushima mother who remained in Fukushima but evacuated her son to Hokkaido; and Ms Sonoda, a Fukushima mother who evacuated with her child and husband. Says JAN UK, “In June 2018, Ms Sonoda attended the 38th UNHRC (United Nations Human Rights Council) as a panelist in the Displaced Persons session, speaking as a victim of the Fukushima Daiichi Nuclear disaster.” 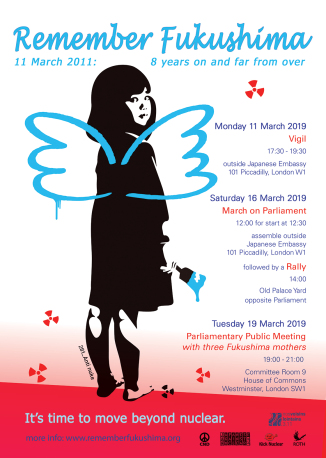 This year’s poster. “Fly away” by 281_Anti nuke, courtesy of the artist and his agent, Roth Management Ltd.

The group will be introduced by Caroline Lucas, the only Green Party member of the British parliament. A presentation will also be made by Dr Ian Fairlie, an independent consultant on radioactivity in the environment.

The following evening, the mothers will speak at a second event, accompanied by a film screening of Munen (Remorse) also featured in a Beyond Nuclear International story last March.

Its members continue resolutely to protest against Japan’s nuclear policies and programs, such as the restart of reactors at Oi Nuclear Power Station, fuel recycling and nuclear export, along with other anti-nuclear groups.

Details about the upcoming events can be found on the JAN UK website and on the Remember Fukushima event page as well as the Facebook page.