Posted on October 20, 2018 by beyondnuclearinternational

Ahmed el-Hadj Hamadi was huddled into a building with the rest of his community by French soldiers early in the morning. They were instructed to lie down, close their eyes and cover their ears. He then remembers a sound like “the world coming to an end” and the windows turning white. A cord above their prone bodies swung erratically until the light bulb it held shattered.

“I thought it was the apocalypse. We all did,” he said. “We all thought we might die.” Later, the French military began tasking out labor to residents in the isolated desert region of Algeria. “They had built a kind of village at the explosion area, and even put animals in it,” Hamadi added. “After the blast we were sent out to gather all the rubbish. The ground was all burned, white, liquid.”

To nomadic communities around the town of Reggane, they’re known more than half a century later as “leopard skins” — stretches of sand across Algeria’s southern Sahara that are peppered with small black clumps. People used to collect scrap metal from the charred warplanes and trucks that emerge, fossil-like, and then smelt them into jewelry and kitchen utensils.

Tourists have been told it is safe to visit the Hoggar Mountains, site of underground French atomic tests. (Photo: Guillaume Lecoquierre, Creative Commons/Flickr)

But these Algerians were not properly warned of their danger after France’s misgoverned nuclear bomb-testing campaign of the early 1960s, which vitrified vast tracts of desert with heat and plutonium and left a legacy of uncontained radiation that is still crippling inhabitants. Estimates of the number of Algerians affected by testing range from 27,000 — cited by the French Ministry of Defense — to 60,000, the figure given by Abdul Kadhim al-Aboudi, an Algerian professor of nuclear physics.

Yet there has been little accountability for France’s disregard. A compensation scheme for victims of France’s nuclear tests exists, but it has made payouts to only 17 people. The majority of those were residents of French Polynesia, where France relocated its nuclear testing campaign after leaving Algeria and experimented with more than 190 nuclear bombs from 1966 to 1996.

An Algerian wire report recently stated that French officials will visit Algeria during the next month to strengthen ties between the two countries, with the compensation process being one point of discussion. But French officials have not confirmed the date.

France tested its first nuclear bomb in the Tanezrouft area, a portion of the Sahara that straddles Algeria and Mali, some 30 miles south of Reggane, on Feb. 13, 1960. Named Gerboise Bleue (“blue jerboa”) after the left hue of the tricolor French flag and a small rodent living in the Sahara, it had a blast capacity of 70 kilotons — or more than four times the strength of Little Boy, the U.S. bomb dropped on Hiroshima at the end of World War II.

The first French atomic test in the Sahara, February 13, 1960

Over two years, the French tested four bombs above ground in Tanezrouft. But even after Algeria’s independence from France in 1962, at the end of an eight-year revolutionary war that left hundreds of thousands dead, the French maintained a military presence in the region and tested 13 nuclear bombs underground, in a facility beneath the Hoggar mountains, 400 miles southeast of Reggane.

That angers many who point to what they see as an ongoing disaster in Algeria. “This area is still one of the most affected,” said Roland Desbordes, president of the Commission for Independent Research and Information about Radiation, who has visited the blast sites with Algerian journalists and nuclear experts multiple times. “It’s frequented by desert nomads. There’s a well that they use near Tan Afella Mountain,” a peak that rises directly above the underground testing site.

When France finally left, it buried a range of contaminated objects throughout the two areas — metal from remote-controlled towers that activated the bombs, engine parts from planes that flew into Gerboise Bleue’s mushroom cloud to gather radiation data and military-grade trucks placed in the blast radius to act as barometers of its power. But Saharan winds later swept away the sand covering these nuclear tombs.

Southern Algerians — the vast majority of whom were never informed by the French about residual radiation hazards and in some cases the testing dates — began stripping the items for resources.

Radioactive metals burned by inhabitants to retrieve copper and metals for recycling. In 2009, the French laboratory, CRIIRAD, measured levels of cesium-137, americium-241 and plutonium in these metals at 5 times higher than background. (Photo: CRIIRAD 2009.)

“The fact that people were not aware of the dangers of this material for years is criminal,” said Larbi Benchiha, a French-Algerian journalist who was born in Algeria a year before Gerboise Bleue and has made two documentaries on Reggane and the surrounding areas. Benchiha did not learn about the nuclear tests until 1996 — 16 years after he moved to France.

“From the abandoned nuclear testing bases, people have recovered plates, beams, electrical cables and equipment of all kinds, all of which is radioactive,” he continued. “They have incorporated them into the construction of their homes.”

Residents of Reggane told Benchiha about the strange uptick of medical issues that first appeared during the 1970s and continue to this day. Babies born with atrophied limbs; cancers of the liver, stomach and skin; cases of temporary blindness among those who saw the brutal flash of light as it ripped through the Maghreb about 6:30 a.m. Some of Reggane’s faithful were in the middle of their Islamic morning prayers when it happened 55 years ago.

The French government has remained relatively quiet on the matter, even as criticism of the country’s disregard for safe nuclear containment practices mounted in France, Algeria and abroad. Algerian nuclear energy expert Ammar Mansouri described the tests as “the most despicable crimes perpetrated by colonial France in Algeria” during a conference in the capital, Algiers, earlier this month. He demanded that France, which signed a retroactive International Atomic Energy Association treaty on radioactive waste management in 1997, face international law.

In 2010 administrative progress was made when the French National Assembly approved a compensation plan for victims of its nuclear testing campaigns in Algeria and French Polynesia, which set aside approximately $11 million to be divided among recipients. 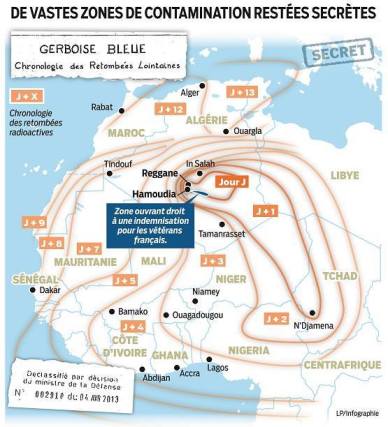 Activists and nuclear experts have since derided the plan, which is governed within the framework of what’s known as the Morin law, as more of a diplomatic attempt at saving face than a motion toward recompense. Modest estimates suggest that since 1960, at least 150,000 people have lived in, near or traveled through areas where France has tested atomic arms.

“Every case is considered by a team of doctors, experts in the field, and the committee itself,” said a representative from the official Committee for Compensation of Nuclear Test Victims (CIVEN), who requested anonymity because of the sensitivity of the issue. As of December 2014, 931 people have applied for compensation. The average amount issued thus far is about $80,000 per person, but that number can vary widely, he reported.

Some applicants wait a year or more before hearing results. “If submitted from France, the applications may take anywhere from eight to 12 months to process,” he said. “If submitted outside France, that process could take longer, due to the intricate review process and the distance between CIVEN headquarters and where the applicants live.”

Victims have to prove they meet a number of criteria to be approved. They need to have been diagnosed with one of 18 radiation-associated diseases, mostly cancers, and be able to demonstrate that they spent time in a specific area delineated by CIVEN with latitude and longitude coordinates. Then they have to estimate monetary values that correspond to how much the suffering has harmed their health and professional life.

A similar compensation program established by the United States has granted more monetary awards than it has denied. Like France’s National Assembly, the U.S. Congress took nearly 50 years to ratify a program recognizing those who suffer from illnesses related to nuclear testing or uranium mining, which proliferated in the western part of the country during the 1950s. Since it was established in 1990, that program, the Radiation Exposure Compensation Act, has rewarded almost $2 billion to 42,000 citizens — about 70 percent of applicants. 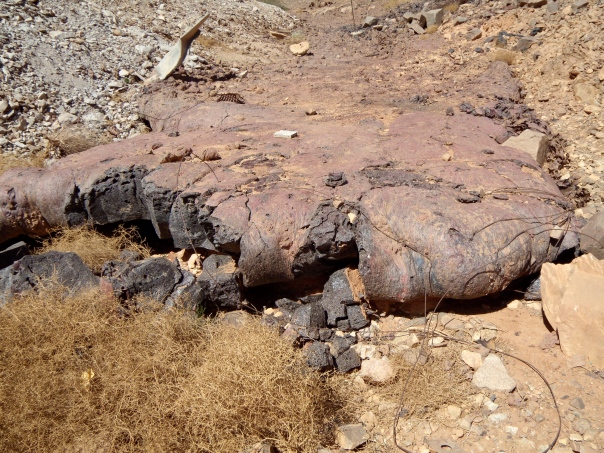 The U.K. has faced similar criticism for failing to compensate indigenous populations in Australia, where it tested two nuclear bombs on the Monte Bello Islands and at least seven in the south, at Maralinga. In 1993 it granted nearly $30 million to the Australian government to cover plaintiffs who claimed death or injury as a result of radiation.

Yet in Saharan Algeria, France’s failure to disclose to local residents the extent of contamination in surrounding areas positioned them for decades of ignorance, and as a result, there has been little record keeping by local medical institutions to track the quiet boom of radiation illnesses.

“Doctors at the hospital Reggane have no statistics, no epidemiological studies,” said Benchiha. “It is the same in Hoggar, where several French soldiers were severely irradiated in 1962 after a bomb blast was not properly contained.”

For many who lived in Reggane the week before Feb. 13, 1960, the only record of their radiation was captured by a necklace. When French troops visited populations the day before Gerboise Bleue, they issued dosimeters on chains to be worn around the neck. A few days later, the troops returned. They collected the necklaces, wrote down who wore them and left, keeping the data for their analyses but never returning to let residents know of the invisible danger that would soon afflict them.

Hamadi, who has lived within 50 miles of France’s aboveground blast sites since before the tests, told Al Jazeera he was completely unaware of any French compensation plan.

“The French are our brothers … But we just want the protection we need,” he said. “We need proper communication, medical evaluations, protections and payment for the damages. No one has helped us.”

This article first appeared on March 1, 2015 on Al Jazeera America which has now closed. Johnny Magdaleno is a writer and journalist. You can reach him via his website, JohnnyMagdaleno.com.

Note: The 13 French “underground” tests in Algeria in the 1960s in the massive Hoggar mountains near Ekker, were supposed to “contain” the explosions and the radioactivity. In reality, a number of these tests released radioactive materials into the environment, according to CRIIRAD. In particular, the organization says, the May 1, 1962 test, named Beryl, resulted in the ejection of radioactive lava flows from one of the galleries and also released a cloud of radioactive dust. When journalist Larbi Benchiha shot his documentary there in 2009 he asked CRIIRAD president, Roland Desbordes, to accompany him and take readings. The CRIIRAD report on their findings can be read, in French,  here.