Posted on October 20, 2018 by beyondnuclearinternational Karipbek Kuyukov, who will receive the 2018 Nuclear-Free Future Award for Education in October, likes to say: “I have no arms, but I join you in waving goodbye to nuclear weapons.”

Kuyukov was born in the small Kazakhstan village of Yegyndybulak, without arms, a result of his parents’ exposure to the Soviet atomic bomb tests. There were 456 of these in all, conducted between August 1949 and November 1989 at the Semipalatinsk test site — also known as The Polygon — just 60 miles (100 kilometers) from Kuyukov’s family home.

Today, Kuyukov is his country’s foremost campaigner against any resumption of nuclear testing and also for justice for those afflicted by atomic tests, not only in Kazakhstan, but around the world. And he is also one of his country’s most well known contemporary artists. 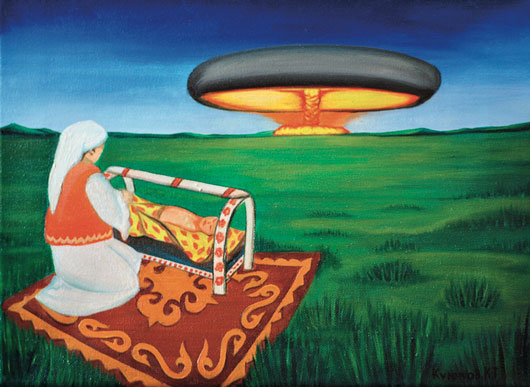 “I think my mission on earth is to fight to become one of the last victims in the history of nuclear testing,” Kuyukov says in Andre Singer’s compelling film — Where the Wind Blew — about the tests in Kazakhstan and also in Nevada in the US. (The film is due to be available in the US via iTunes in the fall. You can view the trailer below.)

Karipbek, now 50, wants “to ensure that this nuclear madness never happens again. So we can look with pride in the eyes of a new generation, the children who will live after us.” And he communicates that message through his painting.

When Kuyukov first took up art, he said in a 2012 speech, he did not know why, “but my soul was striving toward creating something beautiful. I did this without arms, but with my feet, legs and mouth. I have become an artist, because an artist’s soul cannot be diminished by a physical limitation.”

His art, and his resolute determination to travel and speak out about atomic tests, has turned Kuyukov into a global ambassador for the cause. When his art is exhibited in galleries around the world, Kuyukov travels with it, giving presentations and urging the need for a nuclear weapons-free world. He represents The Atom Project, a global campaign to permanently stop nuclear weapons testing.

Kuyukov was nominated for the Nuclear-Free Future Award by countrywoman, Marzhan Nurzhan who works for Parliamentarians for Nuclear Non-Proliferation and Disarmament. She wrote that Kuyukov “has overcome many obstacles to become an anti-nuclear weapons activist. He was part of the civil society movement that ended underground tests and closed down the Soviet nuclear test site in Kazakhstan in 1991.

“Since then he has continued to campaign against nuclear weapons globally, speaking out against nuclear weapons at conferences and events held in such places as the United Nations and the United States Congress,” Nurzhan continued. “His presentation in the historic Kennedy Caucus Room of the US Congress in 2014 drew a standing-room-only crowd of legislators, legislative assistants, ambassadors and media – and served as the launch by Senator Markey of the ground-breaking SANE Act (Smarter Approach to Nuclear Expenditure).” 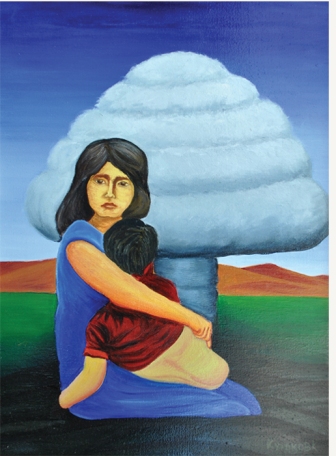 Both Kuyukov and Kazakhstan president, Nursultan Ábishuly Nazarbayev, who made Kazakhstan the first nuclear weapons country in the world to abandon its nuclear arsenal, have been nominated for the Nobel Peace Prize.

During his 2012 speech at the international conference, “From a Nuclear Test Ban to a Nuclear Weapons-Free World,” held in Astana, Kazakhstan, Kuyukov vividly described the experience of the Semipalatinsk atomic tests on the surrounding populations.

“Years ago during the testing, my parents bore witness to those bright and vast mushroom clouds as they filled the sky. When I was born, I was born without arms, and it was a shock to my mother. Later, when I was old enough to understand, my father would tell me how he would drive along the steppe roads and would be stopped by military soldiers for trespassing on the forbidden territory — even though this was the shortest way from one place to another. My parents would climb on the hill to better see the nuclear mushrooms, although they were instructed to lie down on the ground and cover themselves.”

Thus, the atomic tests became a kind of deadly spectacle for the people left in the dark, even as they were almost blinded by the bright lights of the atomic blasts. “The people who lived in Semipalatinsk at the time came out of their homes during the explosions to watch them,” Kuyukov told the attendees as the Astana conference.  “They didn’t even know about the health threats and devastating consequences of the crimes being committed against them. People were basically treated as guinea pigs.” 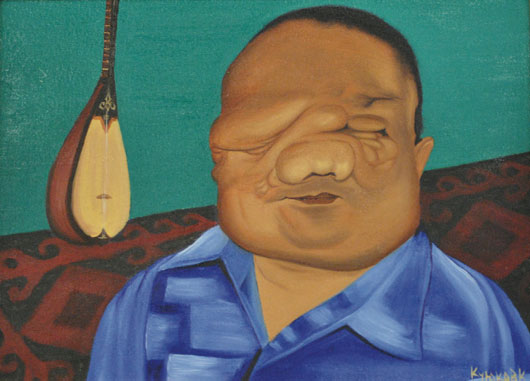 Kuyukov’s painting of another well-known atomic activist from Kazakhstan, Berik Syzdykov, who was born deformed and blind as one of the million victims of radiation from Soviet nuclear testing.

Photographer Phil Hatcher-Moore traveled to Kazakhstan to learn more about the legacy of the atomic tests and recorded his findings in a stunning photo essay — Nuclear Ghosts — featured in National Geographic. Hatcher-Moore also learned that more than 100,000 people are still affected today by on-going exposure to radioactive fallout, even though testing stopped almost 31 years ago. And he learned of the deliberate atrocities — the “guinea-pig” effect that Kuyukov refers to.

Hatcher-Moore wrote that during the 1950s, “one guy was packed up with his tent and told to live out in the hills for five days with his flock. He was effectively used as a test subject to see what happened.”

Kuyukov has also listened to the stories of others — one such moving scene is featured in Where The Wind Blew when he talks with two elderly farmers about their experiences during the atomic tests. “I have been to many countries where people have suffered from living under the shadow of nuclear tests,” Kuyukov said in Astana. “I have seen the tears falling from the eyes of mothers from Hiroshima and Nagasaki. I have participated in meetings and protests at the Nevada test site in the United States.

“I have seen sick mothers, and children — hidden by mothers uncomfortable with showing their children to other people. I have seen the effects of the great calamities that have damaged our planet.”

Like the Hibakusha of Hiroshima and Nagasaki, Kuyukov’s most fervent wish is to see an end to nuclear weapons. “My main mission on this land is to do everything I can for people like me to be the last victims of nuclear tests,” he said. I will continue to call on all the mankind to preserve security on the planet until my heart stops.”

Headline photo and those of Kuyukov’s paintings courtesy of The Atom Project where you can read more about Kuyukov and his work. The Nuclear-Free Future Award will be presented in Salzburg, Austria, on October 24, 2018.