The fox we need to guard this henhouse

Posted on May 12, 2019 by beyondnuclearinternational It was a lowering, blustery day, clouds hanging heavily above our heads when Meilyr Tomos, with People Against Wylfa B, and I went to rendezvous with Awel Irene, one of the lead watchdogs on the Trawsfynydd (pronounced Trousfinneth) nuclear power plant site tucked inside Snowdonia National Park in Wales.

We collected her in a parking lot before driving on. She was delivered there by her partner, a handsome man in a woolly sweater flecked with pieces of straw. “I have to get back to the sheep,” he said by way of explanation. “How many do you have?” I enquired.

In Wales, where sheep outnumber people three to one, 100 sheep is a small flock. They dot the landscape everywhere, not only grazing in meadows but perched on precipitous hillsides, sometimes high up, looking like tiny white outcroppings on the mountains that give Wales its rightful place as one of the most scenic regions of the UK.

We set off, and that famous Welsh landscape began to unfold before our eyes. Villages were tucked into rolling green hillsides, or scattered along valleys. Abandoned slate quarries revealed the scarred, grey interior of lush and looming mountainsides. The daffodils were already blooming. Streams cascaded down from rocky heights. Rugged ponies grazed on vertiginously sloping grasslands. And of course there were sheep. Everywhere. 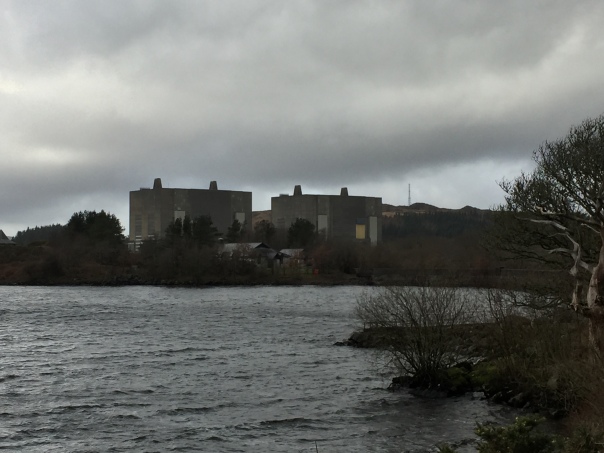 But as we approached Trawsfynydd, site of two old Magnox reactors which opened in 1965 and closed in 1991, the scene turned appropriately grim, the rain began to fall and the skies to darken.

Irene is with a group called CADNO, founded in 1987 and active until the plants closed. The CADNO acronym in Welsh means Society for the Prevention of Everlasting Nuclear Destruction. It is also the Welsh word for fox. Now the group is slowly gearing back up, because the Trawsfynydd site is being talked about as a possible location for a new, small modular reactor (SMR). CADNO is the fox we actually need to guard this henhouse.

My guides, Meilyr Tomos (L) of PAWB and Awel Irene of CADNO. (Photo by the author)

But with new nuclear projects potentially looming at the site, Irene, and fellow longtime activist, Deilwen Evans, have taken the lead on reforming and re-mobilizing CADNO. The two women don’t see the SMR as the jobs panacea it is being presented as. As Evans told the BBC just over a year ago:

“It is always the case that we accept jobs that imperil the community or do we go for jobs at any cost?

“Maybe ‘small nuclear reactor’ gives the impression that these are safer but they are totally experimental and totally new so we have nothing to go on apart from their say so.

“My concern is they have not been tried or tested.

“I don’t believe in nuclear power because of the waste it makes and I believe there should be a public inquiry into the health effects of the last power station in this area.”

Our car rounds a bend and that “last power station” presents itself across a black, storm-tossed lake. The twin buildings are supposed to be architectural wonders. They were designed during the Brutalist/Modernist period, by Scottish architect Sir Basil Spence, better known for Coventry Cathedral. There are tiny turret-like structures on the roof, meant to give the buildings —from a distance — a sort of castle effect.

They sit on a man-made lake that was originally built to dam streams for a hydro-electric plant, then enlarged to accommodate the inflow of cooling water needed for the two Magnox reactors, the only UK nuclear power plant not constructed on the coast. From a distance, the reactors do indeed look solid and fortress-like. But close up, there are disturbing signs of decay, the walls pockmarked with numerous patches where cracks have been repaired.

A sign on the cafe window at Trawsfynydd lake encourages fishing. (Photo by the author)

We pull into the parking lot of a lakeside cafe, a building that also houses a shop selling fishing tackle. There are signs posted encouraging fishing, which strikes me as surprising. But Irene tells me not only do people fish, they swim in the lake, too. And there used to be boat tours, but no more. We step out into a biting wind, the reactors lowering at us across the choppy lake, then hurry back into the warmth of the cafe.

It’s hard to imagine how locals allowed such a radioactive blight on their spectacular landscape, but Irene and Tomos remind me that the area has hosted heavy industry for a couple of centuries. The surrounding towns and villages were home to quarrymen and their families and almost everyone has someone in their family history who worked slate. The area also had an explosives factory. This, said Irene, made it easier for locals to accept Trawsfynydd. They were already used to risk.

As they continue to describe Trawsfynydd’s evolution, over flapjacks and coffee, the pastoral, sheep-dotted idyll is starting to evaporate.

The abundance of wildlife at Trawsfynydd. But how are these creatures really doing? (Photo by the author)

I wonder what the health statistics in the area are like and whether the lake has ever been tested. In the case of the former, a health survey was conducted in the surrounding population by Chris Busby. It was released in 2006 and came in response to concerns of local women who felt there were elevated rates of cancer in their community, which is what Busby’s survey found. However, Busby soon found his study under fire. Fishing in the lake continued.

But what is in the lake remains an open question. There were accidents over the years, and of course routine radioactive releases. According to a UK site, They Work For You, which sheds light on Parliament and its activities, “In February, 1986, a pressure valve opened on top of one of the two heat exchangers which generate steam at the No 1 reactor at Trawsfynydd nuclear power station. 13 tons of coolant carbon dioxide were released to the atmosphere in 14 minutes before the valve was manually closed. Small quantities of neutron induced radioactivity (not fission products) escaped in the gas. The Central Electricity Generating Board (CEGB) which operates the plant, described the accident as ‘minor’. According to “The Guardian” (March 7) the radiation released by the accident was estimated to have extended 5-19 kms down wind from the plant. The releases included Manganese-56, Tritium, Sulphur-35 and Cobalt-60.”

But a paper released the same year by Dr. Don Arnott, and published by the International Nuclear Information System of the IAEA, for which Arnott was then a consultant, challenged the ‘minor’ finding. Arnott asserted that the accident “should not be regarded as a ‘minor incident’ as described to the House of Commons. The author suggests that as the reactor has passed its design life span, it is outdated, unsafe and more accidents are likely.”

A closeup look at the Trawsfynydd reactor buildings reveals patches over wear and tear. (Photo by the author)

Tomos points out that the level of the lake water is constantly monitored to ensure it does not drop too low. Why, he wonders, now that the reactors are no longer running? What could those waters, literally, be covering up?

According to a 1987 INIS report by Pad Green, then with Friends of the Earth, UK, “The levels of liquid discharges of Cs-137 and Co-60 into the lake and their levels in the lake mud are monitored, the former by the Central Electricity Generating Board, and the latter by the Ministry of Agriculture, Food And Fisheries (MAFF). The levels of Co-60 and Cs-137 in the mud quoted by MAFF are lower than those found in samples taken by Friends of the Earth. The discrepancies are discussed and possible explanations given. One suggestion is that there may be corrosion problems in the plant. The reliability of official monitoring data is also questioned. Of particular concern is the assessment of the critical group effective dose.”

In an issue of SCRAM, that same year, Green went into detail about the data provided by MAFF and by the Central Electricity Generating Board (CEGB) who sampled both lake mud and fish. Green concluded, that even using the officials figures, the average effective dose numbers were too high. “If it had been operating in West Germany or the United States where more stringent public dose limits exist, Trawsfynydd would have been closed down,” he wrote in SCRAM.

It is clear, agreed Irene and Tomos, that more, independent scientific analysis needs to be done. Eating fish from the lake is likely to be harmful to health, they agree. The anecdotal observations of increased cancer rates locally should be fully examined and assessed. After all, a small modular reactor will also release radiation. An untried and untested design still on paper, it could have a serious accident. And it will produce yet more high-level radioactive waste. 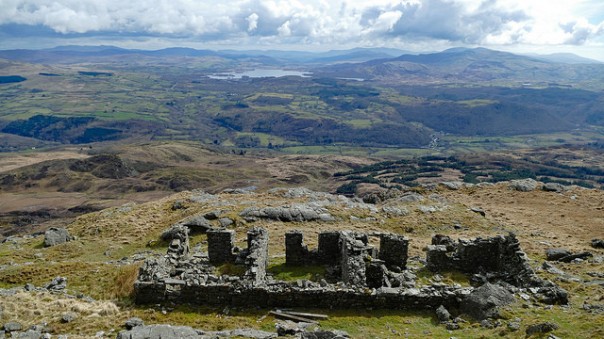 View from an old slate site with Trawsfynyd lake in the distance. Why would anyone choose to despoil this with a new nuclear power plant? (Photo: Andrew for Creative Commons/Flickr)

The SMR phantom is manifesting itself many places beyond Trawsfynydd. Being described as “small” and “modular” tends to mask the reality that it is expensive, of little use for climate change, and likely still far in the future. Local politicians, including in Gwynedd, the county in which the Trawsfynydd reactors sit, view the project as an easy jobs handout for a region struggling to employ people. It’s false hope, of course, because the likelihood of SMRs coming to fruition is slim and would provide only a handful of jobs. The area is ripe for more wind power but the UK government remains eager to subsidize new nuclear instead, the only way new nuclear power plants will ever get built.

Irene recalls the heyday of mass demonstrations when CADNO and other activists in Wales protested the risks and the waste Trawsfynydd produced. In 1989, three years after the 1986 Chernobyl nuclear power plant explosion in Ukraine. there was a big demonstration to close Trawsfynydd. Then the activists went to Westminster.

“I remember CADNO had a public meeting about it at the House of Commons,” Irene recalled, “and I had my six month-old son on my knee.” She said she and her fellow activists were “amazed” when, just two years later, Trawsfynydd was in fact closed. They went back to their lives, and their sheep, and CADNO was no more. Until now.

Headline photo of the Trawsfynydd reactors by the author.

3 Comments on “The fox we need to guard this henhouse”