When resistance becomes a duty

Posted on May 19, 2019 by beyondnuclearinternational

An unimaginable ordeal that became an important anti-nuclear milestone

You will probably not be surprised when I tell you that today I am filled with gratitude and joy. Firstly, I would like to express my thanks. Thanks to those who nominated me as a prize recipient and thanks to those who chose me. Thank you to my presenter, Dr. Heribert Prantl.

The invitation speaks of “the architects of a nuclear-free future.” Speaking for myself, I have to admit, regretfully, that I am at best a latecomer, as, together with many other colleagues, I was a long time advocate for the peaceful use of nuclear energy. It was only when I was forced to deal with the plans of the Bavarian State government and the nuclear energy operators to build a reprocessing plant (WAA) in Wackersdorf, that I quickly became convinced the opposite was true.

But the proponents and nuclear operators made it easy for me. Because any honest and objective observer of the plans for this WAA could quickly realize that the whole package from start to finish was a pack of lies.

And so it was 35 years ago when the then President of the State of Bavaria, Franz Josef Strauss, gave me the answer to my question: whether it was true that a nuclear site was planned for the Upper Palatinate.

“There are neither plans nor any considerations for building a nuclear site in the Upper Palatinate or anywhere else.” 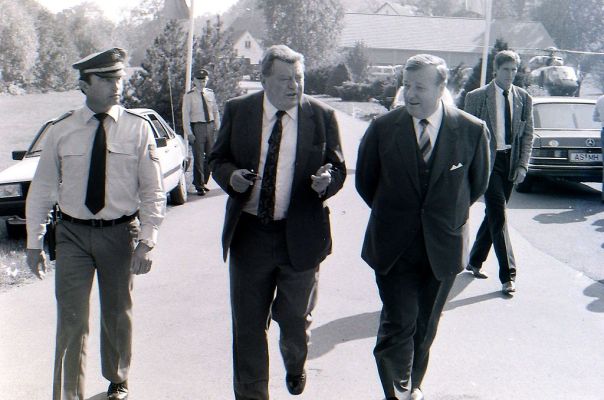 Franz Josef Strauß (center) visits Schwandorff in 1986. He told Schuierer there were no plans for a reprocessing plant in Bavaria — which turned out to be untrue. (Photo: Winfried Weithofer/WikiCommons)

The lord mayor as well as the current minister and state secretaries were witnesses at that regional conference in the Regensburg Kolpinghaus. Only a few months later, the then environment minister, Alfred Dick, informed me, in strict confidence, of the plans to build a WAA in Wackersdorf. There was talk of a chemical factory with jobs for 3,600. A particularly clean operation with no dirt or air pollution. The most important topic was the safety of the plant in every aspect.

Just days later, the board members of the German Association for Reprocessing of Nuclear Fuel (DWK) stood up and prophesied only golden days ahead for Schwandorf and the whole of the Upper Palatinate.

Due to contradictory statements by the DWK people and those politically responsible in Munich, along with my own study of the relevant literature, as well as participation in informational events dealing with the pro and cons, I was relatively quickly convinced I should become an opponent of these plans.

The decisive moment was the statement made by the DWK board chairman that a “200 meter high chimney would see to it that radioactive material would be dispersed as widely as possible.”

After examining the application documents, I refused the building permit. This was the first time that a district administrator in Bavaria, despite instructions from the government and the Ministry, refused to grant such permits.

The period that followed, between 1982 and April 1989, was the hardest time of my life up until that point. The whole region lived through an ordeal of unimaginable proportions. The political clashes became ever harder. The mutual allegations from both sides ranged from lies, chaos, rabble-rousing and even lawbreaking, etc. Despite it all, I saw my main task as stopping the WAA.

I gave up all my free time, and used every free hour and even my holidays for informational events and was on the way to somewhere in Germany or Austria almost every day in order to educate people about the life-threatening and nature-destroying nuclear and plutonium factory. My statements finally led to the government introducing disciplinary proceedings against me that were only taken up three years later by the administrative court.

Between 1984 and 1989 the area around Wackersdorf resembled a zone where a state of emergency had been declared. Protests, demonstrations, police stops, brutal police operations, house searches, arrests, trials and convictions were the order of the day.

Unfortunately due to lack of time today, I cannot get into the details of the police operations and special actions. The nine-year-long campaign against the WAA ended on April 11 when the spokesperson for the nuclear mafia, Bennigsen-Förder, announced the end of the Wackersdorf WAA. Among other things, he said at the time, “you cannot build such a facility against the will of the people.” 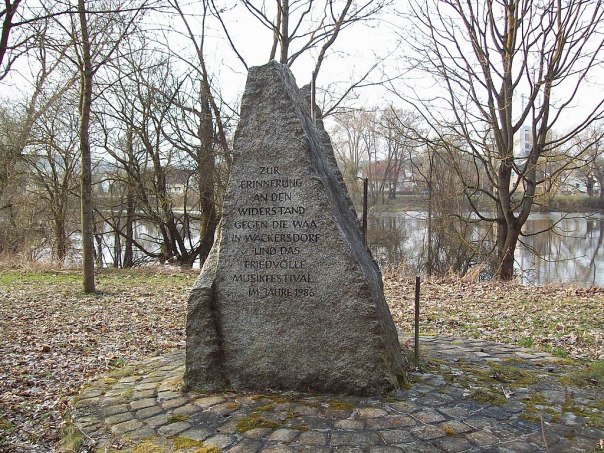 A memorial stone that reads: In memory of the Wackersdorf resistance against WAA and the peaceful music festival in 1986. (Photo: Stefan Riepel, WikiCommons)

Unfortunately, this was not accepted by the responsible politicians, the state government and all of the nuclear mafia. For me and my fellow activists, this was a David versus Goliath victory. A very important chapter, certainly the most significant one in the postwar history of our region, had reached its end. It remains as a reminder, and as a textbook example of what must not happen in a democracy and a constitutional state. But also the recognition of the justice and importance for the future of the well-known quotation, “where right becomes wrong, resistance becomes a duty!”

Do not beg or plead

for homeland and justice.

Translation from the German by Marianne Maini

A tribute to Hans Schuierer

People like Hans Schuirer base their actions on values they hold. People like Strauß have values as well. Near the village of Wackersdorf these values collided. The nuclear reprocessing plant, the bone of contention between  the prime minister and the county manager, was never built.

On June 6, 1989, the Bavarian Ministry of the Environment announced that there would be no nuclear reprocessing plant at Wackersdorf, thereby ending a state of emergency in the Upper Palatinate region of Bavaria that had lasted for years. Helicopters tossed teargas canisters at people who had never participated in a demonstration but now simply wanted to protect themselves and their homeland. For the first time in the history oft he Federal Republic of Germany, the police used the dreaded CS teargas (even against children), which the US military had stopped using in Vietnam after international protests. There was a war; three people died, hundreds were injured.

To stand your ground against violence from above takes enormous strength, a strength you cannot muster alone. The popular resistance in the woods around the Wackersdorf site was supported by Hans Schuierer, the county’s top politician. The upright county manager refused to issue a building permit, demonstrated along with his wife Lilo and supported the protesters in constructing their makeshift village. All this amounted to treason. With its conservative majority the Bavarian government managed to pass a „Lex Schuierer“ (Bavarian Administrative Code, sec. 3 b), which enables the State to overrule the office oft he county manager. Schuierer himself, a member of the opposition Social Democrats, was to be impeached. The proceedings lasted for four years before they were stayed by the Regensburg regional court.

Hans Schuierer had become a symbolic figure. Trained as a bricklayer, he was nobody’s fool. Franz-Josef Strauß accused him of “sabotage“ and told him the nuclear reprocessing plant was “no more dangerous than a bicycle wheel factory“.

In 2005 Hans Schuierer was awarded Germany’s highest civilian medal, the Bundesverdienstkreuz. In 2011 he was made a honorary citizen of Schwandorf, a town near Wackersdorf. In 2014, we are honored to give him the Nuclear-Free Future Award for Lifetime Achievement.

The above was written for the 2014 Nuclear-Free Future Award program.

← The fox we need to guard this henhouse
Accused of “treason,” one man stands up to the nuclear powers and prevails →