Accused of “treason,” one man stands up to the nuclear powers and prevails

Posted on May 19, 2019 by beyondnuclearinternational

A viewing of the poster and trailer for Wackersdorf, the new feature film from Oliver Haffner, might lead you to believe it is an action-packed drama about the large and sometimes violent protests at the proposed site of a new nuclear reprocessing facility in what was then West Germany.

Wackersdorf did indeed become famous for its sometimes riotous scenes along the fence line of the site, where two protesters died. The trailer also features rabble-rousing speeches by locals and angry ex-miners desperate for employment in order to feed — and hold together — their families.

In the midst of this turbulence is a quiet and serious middle-aged man who is tasked with the final decision on whether or not to green-light the nuclear project. His name is Hans Schuierer, and it is in fact his story that this film is about. Schuierer, who was awarded the Nuclear-Free Future Award for lifetime achievement in 2014, is captured in a sensitive performance by Johannes Zeiler.

Towards the end of the film, we do start to see the riot shields, the tear gas and the ugly confrontations — much of which is actual news footage from the events themselves (Haffner shrinks the screen to a square to deliberately differentiate the archival footage from the re-enactments.)

But before we reach that dramatic apotheosis, we travel a much slower and more studied path, as Schuierer is at first intrigued and delighted by the offer of the reprocessing plant, then gradually awakens to the immense health and safety risks the installation would in fact represent to his economically struggling community.

(To play the trailer below with English subtitles, click the CC icon in the lower right of the screen and make that selection.)

Seduced by the wily charms of the nuclear reprocessing society’s envoy — played with ingratiating slickness by Fabian Hinrichs — Schuierer begins to doubt the veracity of what he is being told. He visits the local library and starts to read about nuclear power, gently egged on by his teenage daughter whose physics teacher has already given her the lowdown on its perils.

Schuierer is also challenged by an established group of local opponents, at first viewed as dismissable eccentrics but with whom Schuierer eventually joins in the at first peaceful opposition to the reprocessing plant. (The German anti-nuclear movement was already in full swing by the time of the Wackersdorf confrontation, which took place in the 1980s.)

Schuierer was the county manager of Schwandorf, a conservative and religious region of northern Bavarian in southern Germany. Once a booming mining area, it has fallen on hard economic times when the film starts. The journey Schuierer embarks upon, from nuclear disciple to principled dissenter, feels familiar. It is the small town bureaucrat versus the powerful party political behemoth, the traditional David and Goliath confrontation. But the film takes no hackneyed shortcuts in elevating Schuierer to hero status. It is a slow, deeply personal look at one man’s conscience in the face of State-level corruption and abuse of power.

Demonstration at the reprocessing site construction fence in 1989, shortly before the project was abandoned. (Photo: Kasa Fue/WikiCommons)

Once Schuierer rejects the reprocessing scheme, he watches his own powers stripped away by the autocratic Bavarian prime minister, Franz-Josef Strauss — who appears in newsreel footage railing against Schuierer and the protesters like a bullying Mussolini.

In a more intimate moment in the film, when Schuierer resolves not to sign the contract to proceed with the reprocessing plant, his wife Lilo lets him know she was against it from the start. But she has clearly allowed him to take his own journey to that same realization. A second figure, a well-educated lawyer with whom the humble Schuierer, a former bricklayer, feels at odds, turns out to be an important ally as well.

It is these personal relationships, and the slithering false bonhomie of Billinger — which turns quickly to hostility once Schuierer changes his mind — that anchor the film. Schuierer must also contend with the loss of friends closer to home, including the mayor of Wackersdorf, who wants the reprocessing plant to meet the jobs needs, never mind the consequences. 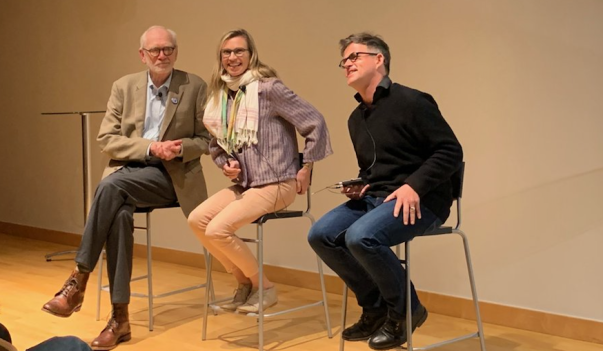 The Wackersdorf reprocessing plant was abandoned in 1988, two years after the Chernobyl nuclear disaster which seriously affected Germany and much of Europe, and upon the death of the dictatorial right-winger Strauss. But arguably, the massive protests at the site, which drew people from across Germany and from neighboring Austria, along with the emerging Green Party (it’s “NUCLEAR, NO THANKS” button was created at the party’s formation in 1980) also contributed significantly to the project’s collapse.

← When resistance becomes a duty
A rebel with many causes →

3 Comments on “Accused of “treason,” one man stands up to the nuclear powers and prevails”