Posted on June 9, 2019 by beyondnuclearinternational 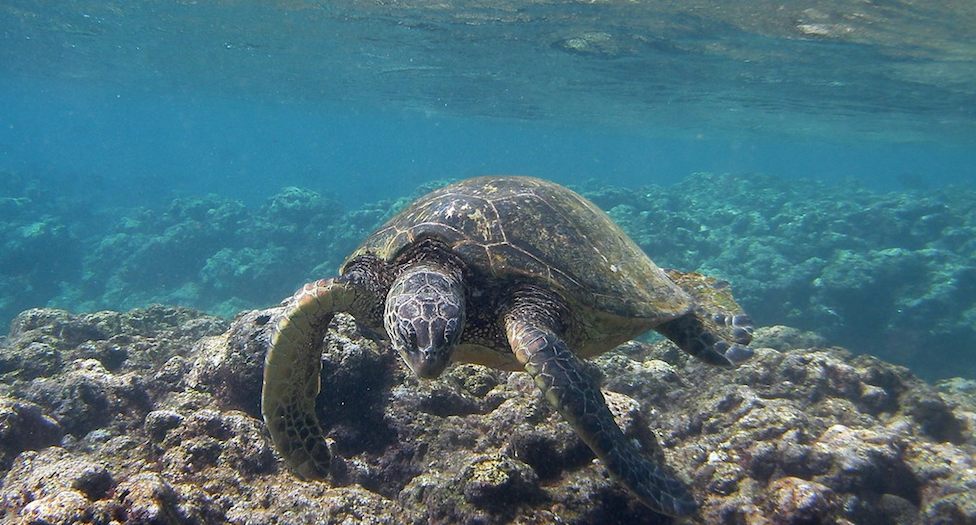 By Linda Pentz Gunter and Paul Gunter, with the Turtle Island Restoration Network

On Thursday, May 30, 2019, the Turtle Island Restoration Network and Beyond Nuclear filed a formal notice of their intent to sue the U.S. National Marine Fisheries Service (NMFS), the Nuclear Regulatory Commission (NRC) and Florida Power & Light (FPL) for failing to protect endangered species from illegal intake and harm at the St. Lucie Nuclear Power Plant in Jensen Beach, Florida.

For decades, the reactor site’s cooling water intake system, which draws in nearly three billion gallons of sea water daily, has routinely captured, harmed and killed thousands of marine animals, most notably endangered and threatened species of sea turtle as well as the endangered smalltooth sawfish. But it’s not just countless species of marine wildlife—two scuba divers were sucked through the unprotected cooling intake pipe on separate occasions, one of whom is suing the power plant for being entrained at the plant in 2016.

A video, produced by the authors in 2001, showed how sea turtles — around since the time of the dinosaurs — are being assailed from many quarters, and the compounding and cumulative damage done to them by captures and kills at nuclear power plants.

“For years, the National Marine Fisheries Service has knowingly allowed the nuclear industry to get away with murder, allowing endangered species to be sucked towards the edge of extinction in the name of unsustainable energy,” said Turtle Island Restoration Network Executive, Director Todd Steiner, who is also featured in the 2001 film. “Almost drowning humans hasn’t even compelled the federal government to take action, so we are.”

The notice states that the Fisheries Service’s failure to insure that adequate protective measures are adopted in the power plant, has resulted in incidental take exceedances for three endangered species, in violation of the Endangered Species Act (ESA). Smalltooth sawfish, Kemp’s ridley sea turtles, and green sea turtles, that swim too close to intake pipes in the Atlantic Ocean, are sucked into the St. Lucie nuclear power plant, which is owned by FPL. Just last month, an Olive ridley sea turtle, not even listed among the species included in the take allowance, was also entrained at the plant.

The plant has also captured loggerhead, hawksbill and leatherback sea turtles and even manatees.

The Fisheries Service provides the plant with a limited “exemption” under Section 7 of the ESA that requires a scientifically prepared Biological Opinion from the agency to set “Incidental Take Limits” for protected marine animals. Since 2006 however, NMFS, FPL, and the NRC have been stalling a Section 7 Review for a Biological Opinion under the ESA.

“The responsible federal agencies have been out of compliance for decades,” said Deborah Sivas, director of the Environmental Law Clinic at Stanford University, which filed the intent to sue on behalf of the two groups. “Allowing the continued unfettered entrainment of marine life through intake pipes is a prescription for disaster that undermines the Endangered Species Act and is a misstep we intend to solve through legal action.” 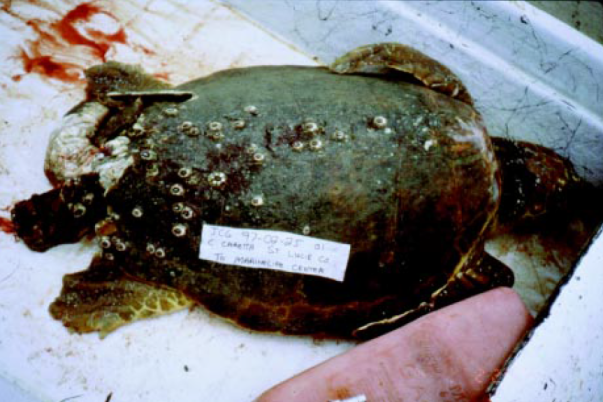 An injured loggerhead sea turtle captured at the St. Lucie nuclear power station in 1997. The animal later died. FPL repeatedly insisted that other causes, and not entrainment though the barnacle-encrusted plant intake pipe, were responsible for sea turtle injuries and deaths at the plant. (Slide from Licensed to Kill)

FPL has been obligated to limit the number of endangered species killed by the plant’s intake system since its operating license was amended in 2001. In 2016, NMFS issued new rules that allow FPL to suck 1,143 protected sea turtles from the ocean into the St. Lucie nuclear power plant’s intake canal, with specific limits for each of the five species—143 more than before. In one year alone, the plant captured 933 sea turtles.

The animals are harmed by entrainment into the large diameter intake pipes, where they can be injured on the long turbulent ride, only to be discharged into the plant’s intake canal. There, sea turtles are often impinged on nets where they drown (suffocate) if not promptly rescued.

In an attempt to mitigate this harm, the concept of a Turtle Excluder Device (TED) was introduced at the start of a new Reinitiation of Consultation under Section 7 of the ESA in 2006, after St. Lucie exceeded its then Take Limits. The reinitiation dragged on for 10 years. Finally, in 2016, when NMFS issued its Biological Opinion, the design and installation of a TED had become a requirement. But by 2019, 13 years after the idea was first mooted, FPL had failed to deliver a functioning TED.

NMFS has twice reinstated consultation under Section 7 of the ESA in the past 16 months. The first began in February 2018, but was abruptly withdrawn by the agency in December 2018 “on the basis of insufficient information”.

Reinitiation began again in May 2019, but the NRC’s Biological Assessment now omits the requirement for a TED. This, despite the expert submittals from John Mitchell, Unit Supervisor, Harvesting Systems and Engineering Division at the NMFS Southeast Fisheries Science Center, Mississippi Laboratories in Pascagoula, MS, and Kendall Falana, the lead TED designer and test specialist for NOAA Fisheries Harvesting Systems Unit for the shrimp fishery. The pair provided a concise and constructive evaluation of FPL’s failed test of the St. Lucie TED design, concluding that the FPL design and test was not realistic to conditions actually encountered at the intake structures as it did not provide the live turtles used in the test an escape route over the top of the TED panel. Falana wrote: “In my work, this would be analogous to testing a shrimp trawl turtle excluder device and tying the escape hole shut.”

The expert reviewers further observed that the intake flow rate considerably diminishes further from the velocity cap. In order to minimize the suction of turtles into the intake system, they considered an excluder panel design that features an angled bar configuration with the base of the panels 10 to 15 feet away from the velocity cap. “This design might permit turtles to move freely along and around the base and eventually away from the structure,” they wrote.

Nevertheless, the NRC and FPL have opted to abandon compliance with the TED requirement in the 2016 Biological Opinion, without an explanation in the current Biological Assessment for the dismissal of testing and implementing a workable TED. In our view, this is inexcusable considering the FPL design and test project was under development for significantly more than a decade. It looks suspiciously like a design and test program ultimately intended to fail.

Given the protracted record of the Section 7 process that, at St. Lucie has dragged on without resolution to the turtle take problem; the removal of the TED requirement despite recommendations for an improved version from one of NMFS’ own offices; and the sudden cancelation of the February 2018 reinitation; our groups have little confidence in the Section 7 process. We also note that throughout this time there has been an abject failure to enforce the terms of the 2016 Biological Opinion still in place, as per the terms of Section 9 of the ESA.

Pushback by the industry to our threat to sue has been predictable and clichéd. As reported by TC Palm:

“‘This is deeper than a concern for wildlife,’ he said. ‘They think nuclear energy and the St. Lucie Nuclear Power Plant ought to go away.'”

Well, yes, obviously. None of us simply woke up one day and decided to be anti-nuclear. There are reasons why we think nuclear energy “ought to go away” and one of those reasons is that nuclear power plant operations harm and kill sea turtles and other marine wildlife. FPL’s possibly deliberate stalling and bungling of the TED design and implementation rather suggests that the company’s own agenda puts “concern for wildlife” way down on its list of priorities. Installing a turtle excluder device at St. Lucie could reduce the intake flow of water, making the plant less efficient and thereby reducing profits. Why otherwise, would it ignore design input from the country’s leading TED expert? We have a concern for wildlife. FPL has a concern for its bottom line. That is the bottom line.

Lacking a TED, the best and most ecological operational change at St. Lucie would be to require FPL to switch over from its current once-through cooling system and construct evaporative cooling towers to dramatically reduce the intake of cooling water and harm to endangered marine life and habitat. But with nuclear power plants already wildly uneconomical, FPL is unlikely to agree to an expensive retrofit.

The St. Lucie nuclear power plant was built on a loggerhead nesting beach without thought for the consequences. (Photo: “DSC_0127” by liyu01 is licensed under CC BY-NC-SA 2.0, WikiCommons)

In our 2001 report —  Licensed to Kill: How the nuclear power industry destroys endangered marine wildlife and ocean habitat to save money — we noted that St.Lucie was built on a major sea turtle nesting beach, with little thought for the consequences. Thus, the plant became one more predator for egg laying female sea turtles and their hatchlings. We find it outrageous that the nuclear industry is unwilling to make reasonable operational changes to save such endangered animals from harm and death. The price that sea turtles, sawfish, and even humans are being forced to pay just to save the nuclear power industry money is simply too high and too drastic to accept.