Posted on July 23, 2019 by beyondnuclearinternational

A team of scientists who studied a key forest mammal, the bank vole, living within 50 km of the Chernobyl nuclear power plant, have concluded that the animal’s reproductive success and abundance is impaired by chronic exposure to even “low” levels of radiation in the area, and that no dose is too low to cause these effects.

The large-scale, replicated study, by Mappes et al., and published in April 2019, “tested the hypothesis that ecological mechanisms interact with ionizing radiation to affect natural populations in unexpected ways.” The team found that bank voles showed “linear decreases in breeding success with increasing ambient radiation levels with no threshold below which effects are not seen.”

The bank vole was chosen because “it is a common and abundant terrestrial vertebrate that inhabits Eurasian forest ecosystems, which makes it an attractive indicator species for the health of forest ecosystems that may have been injured by anthropogenic activities,” wrote the authors. 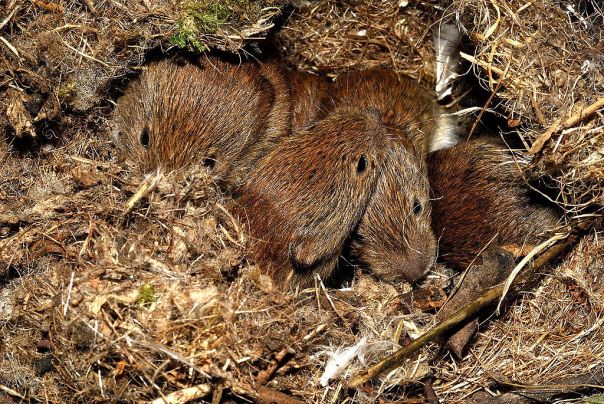 Young bank voles in the nest. Reproduction declines, the higher the exposure to radiation, in voles within 50km of Chernobyl. (Photo: Plantsurfer/WikiCommons)

When the Chernobyl reactor exploded on April 26, 1986, it released fission products across Ukraine, Russia, Belarus and well into other parts of Europe. These included strontium-90, cesium-137 and plutonium-239, which contaminated air, soil and water. Radioactive fallout bioaccumulates in plants and animals, the sources of sustenance for wildlife. At least 90 published studies by many members of the Mappes team, have found seriously deleterious effects of radiation exposure among Chernobyl wildlife, particularly birds, with reduced brain sizes, low to zero sperm counts, cataracts and tumors.

The new Mappes study is important because it joins a body of scientific work that refutes the notion that just because “there are lots of animals in the Chernobyl Zone,” they are unaffected by the nuclear accident. Those “wildlife are thriving” studies mislead the public into believing that animals in the region are benefitting from the absence of humans, and that they are suffering no ill effects from their sustained exposure to radiation caused by the nuclear disaster.

In Mappes et al., the researchers used food supplementation with some sets of voles in order to rule out scarcity of food supply as a cause for reduced reproductive capacities or abundance. But they found little difference in voles whose food was supplemented with those left to forage on their own. 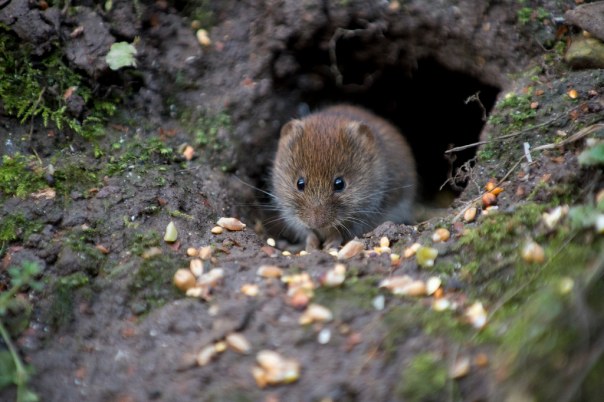 The probability of a bank vole being pregnant decreased significantly with increasing ambient radiation level, the study found. (Photo: “Bank Vole” by clairespelling1 is licensed under CC BY 2.0)

The importance of studying the response of bank voles to radiation exposure in the wild was reinforced by recent findings that, “organisms living under natural conditions appear to be many times more sensitive to the deleterious effects of ionizing radiation” than animals exposed and tested in laboratory conditions. In a meta-analysis by Garnier-Laplace et al. in 2013, which looked at “the effects of Chernobyl-derived radioactive contaminants on 19 species of plants and animals living under natural conditions,” the study team “found that organisms in the wild were more than eight times more sensitive to negative radiation effects than these same species living under laboratory or model conditions,” wrote Mappes et al.

The research team found significant impacts on the bank vole population from radiation exposure caused by the Chernobyl nuclear accident. “The probability of a bank vole being pregnant decreased significantly with increasing ambient radiation levels,” said the study. The size of the females did not alter these phenomena. Nor was abundance of bank voles correlated with breeding probability or litter size.

Seasons also did not affect abundance. “Both summer and winter abundances of bank voles decreased significantly with increasing ambient radiation,” the study found.

The study findings strongly supported the Linear No-Threshold model, which states that there is no dose of radiation so low that it no longer causes harm. Mappes found that “harmful and significant radiation effects on bank vole populations can be observed even at very low levels of ambient radioactivity.” 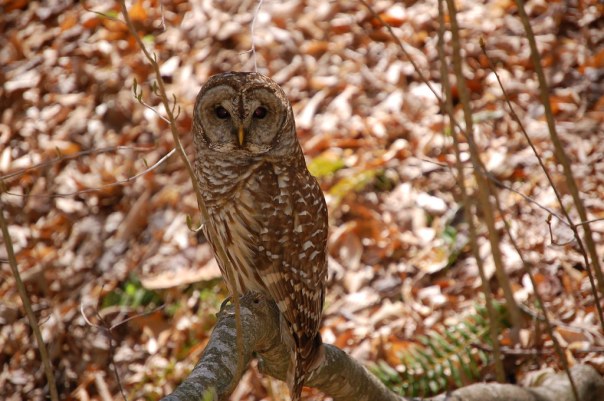 The bank vole is also an important source of food for owls and other forest wildlife. (Photo: “049” by Mike Doss is licensed under CC BY 2.0 )

How are the voles being exposed? As the study explains, the biological effects on voles “could be caused by direct exposure to gamma radiation from the surrounding environment or by exposure to alpha and beta particles accumulated in animals from food. For example, mushrooms, an essential component of the diet of bank voles, can be an enormous source of alpha- and beta-emitting radionuclides.”

Abundance and survival of the bank vole is of course not only important to the species itself. It also serves as an important prey to other mammals and birds, including raptors such as owls and hawks, and weasels, foxes and other predatory mammals. Consequently, an unnatural reduction of the bank vole population due to negative impacts from radiation exposure can start to affect other animals in the food chain. These animals are, of course, also likely affected by radiation exposure, as the many earlier studies have indicated.

The study’s conclusions should send a strong warning to those ready to downplay or dismiss the harm caused not only to wildlife but also to humans, living in — or in the case of Fukushima, coerced into returning to — areas still affected by unacceptable levels of radioactive contamination.

“These results suggest that rodent populations, and by implication, entire ecosystems, are likely to have been affected across perhaps 200,000 km2 in Eastern, Northern, and even Central Europe where radioactive contaminants stemming from the Chernobyl disaster are still measurable in a large diversity of different species and are known to accumulate in the food chain,” the Mappes study said. This has already been observed in studies of wild boar in Germany and reindeer in Finland and Sweden — which are still too radioactive to eat.

As the researchers concluded, “the experimental studies presented here provide irrefutable evidence that even very low doses can lead to significant consequences for individuals, populations, and likely even entire ecosystems.”

And watch a new podcast about Dr. Timothy Mousseau’s more than 50 trips to study animals living around Chernobyl.