Photographic art in the painted desert

Posted on July 28, 2019 by beyondnuclearinternational

The dreaming doctor who is wide awake

“The question I’m asked most frequently is how a black doctor in his 50s working on the Navajo reservation started doing street art on said reservation”, relates Chip Thomas on his website Jetsonorama — whose name itself begs yet another question (we’ll answer that one later in the story. Thomas is in his early 60s now).

Thomas has been asked this same question over and over the last few years, ever since his story caught fire in the (mainly) non-traditional media. Thomas is a medical doctor, but also a photographer who has applied that skill to wall art. Those two passions merged when he began treating Native American patients in 1987. His medical practice is at the Inscription House Health Clinic and he lives nearby.

Chip Thomas wall art in the desert. Photo by Chris English, licensed in the Creative Commons/WikiCommons.

As a doctor, early experiences traveling, especially in Africa, convinced Thomas of the need for universal health care in the US. That led him to the Navajo Nation. His first dabbling in street art in cities like New York were, Thomas says on his website, of the more traditional kind, “largely text based saying things like ‘Thank you Dr. King. I too am a dreamer’ or ‘Smash Apartheid’ and so on.”

But inspired by the work of Gordon Parks, Eugene Smith and others, he soon realized that images of every day people could be equally powerful. Through his work, he told New Mexico PBS, he can now share their stories “in a way that honors them.”  He says that “through my art I am attempting to uplift the human spirit to make the world a better place. So yeh, I’m a dreamer, but I’m a dreamer who’s wide awake.”

On the reservation, where Thomas had first to overcome beliefs that taking someone’s photo was stealing their soul, he gained enough trust to photograph people, then enlarge the images and paste them using a sticky mix of flour and water onto the sides of buildings.

“Amid the austere landscape, the outsize artwork has a gravity unattainable in any gallery,” wrote Stephanie Pearson in an article about Thomas in Men’s Journal. “The images change daily with the elements, deteriorating from exact replicas to impressionistic mirages until disappearing completely.”

As a healer, Thomas was naturally interested in the human stories of his patients. “Everyone has a story to tell,” he says. He learned about their suffering, including from toxic exposures due to uranium and coal mining. Their stories lent inspiration to his photographs as well. But it was only a number of years after he first moved to Navajo, when he was inspired by street art during a trip to Brazil, that he began to consider the idea of displaying his subjects within their own landscape. That turned him into an environmentalist as well.

As Thomas told New Mexico PBS in a 2016 interview, his art was intended to “make a statement and, if at all possible, to wake some people up.”  His work at Valle de Oro, featured in the short film below is, says Thomas, “a call to arms, to appreciate that we don’t have a lot of time left really to do what we can to save the planet, to save our biosphere. This is a clarion call piece,” he says of the feature that mixes dance with his photographic art.

Connecting his subjects to the environment also reflects back to their identities as patients, as Thomas explained in an interview with Diana Kirk for The Progressive.

“As a physician, I see a lot of older men with chronic lung problems who use supplementary oxygen in order to perform activities of daily living. The majority worked in the uranium mines on the Navajo nation in the WWII and Cold War era and are suffering health consequences from the lack of protection and information afforded to them at that time. When companies started mining uranium here in the 1950s and studying the Navajo miners (without telling them of the health consequences of their work), it was thought initially that the Diné, or Navajo, had a gene that prevented them from getting cancer because the rates were so low. However, various cancer rates in the Diné exceed the national average.”

Understanding that also moved Thomas to use his work for activism as well. As he told Kirk:

“In light of multinational mining companies wanting to mine the north and south rims of the Grand Canyon for uranium, which will be transported across the western part of the Navajo nation to mill sites in Utah, and the detrimental effect this has on the environment and human health, I most definitely plan to do more public art work around this issue.” (The threat of uranium mining at the Grand Canyon was temporarily thwarted but has been renewed under the Trump administration.)

Thomas does not put all his photos onto walls. He also has an extensive collection of his photographic work, found on his website, Chip Thomas Photography. He has chronicled not only life on the Navajo reservation, but also in Africa. Within these portfolios, he works exclusively in black and white.

Climate change remains an ever more urgent concern for Thomas. In 2017, he lent his art to those participating in the Peoples Climate March in Washington, DC and elsewhere, providing free, downloadable posters on his website. 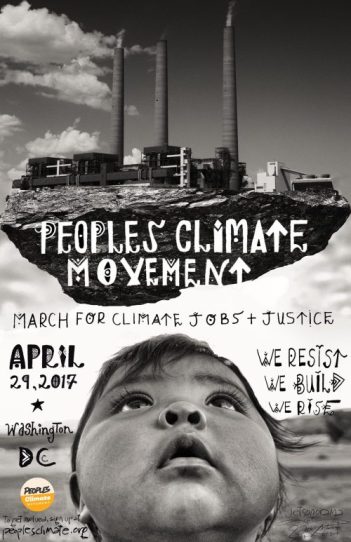 Chip Thomas created and made available free posters available to participants in the 2017 Peoples Climate March.

But his home, and heart, remain on the Navajo Nation, a kind of retreat from the anxieties of the wider world.

There he has expanded his “graffiti” wall art to include other artists whom he invites to contribute murals for what he calls The Painted Desert Project.

Returning to the first question of why Thomas, a black man, lives on a Native American reservation, he told Kirk:

“In a sense, I feel like a modern-day slave in that in my day-to-day life on the reservation I don’t have to deal with institutional racism or racially based abuse outside the work environment, as many of my brothers and sisters do in their interactions in urban areas. Just as escaped slaves found solace in indigenous communities back in the day, I have found that here where I feel that the work I do makes a difference.”

And that other question? Thomas told the New Times in a 2015 interview that his full name is James Edward Thomas, Jr., which abbreviates to JET. “As a kid of the ’60s, one of my favorite TV shows was The Jetsons,” he continued. “When I went to get a Gmail account, I wanted to use the name Jetson, but Mr. Google said, ‘Sorry. That name is taken. Try one of these 3 names,’ one of which was Jetsonorama.”