Posted on September 15, 2019 by beyondnuclearinternational Radioactive water at Fukushima should be stored not dumped

Last week, Japan’s then environment minister, Yoshiaki Harada, made news with a pronouncement that wasn’t news. The storage tanks at the stricken Fukushima Daiichi nuclear site, filled with radioactive water, were reaching capacity. By 2022 there would be no room for more tanks on the present site. Japan would then have to dump the radioactive water stored in the tanks into the Pacific Ocean, he said.

Although likely unrelated to those remarks, a day later, Prime Minister Shinzo Abe dispatched 19 of his cabinet ministers, including Harada. Harada was replaced as environment minister by rising star, Shinjiro Koizumi, the son of former primer minister, Junichiro Koizumi. Both father and son are opposed to nuclear energy, and on his first day in office, the younger Koizumi told reporters that he believed Japan should end its use of nuclear energy and close its nuclear power plants. 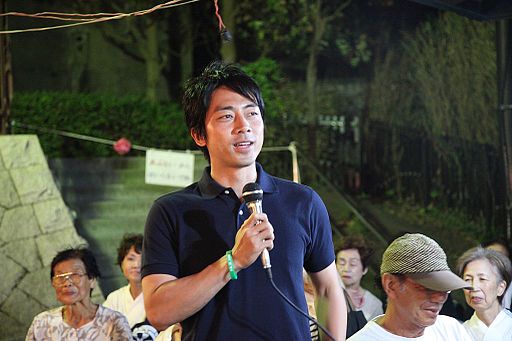 “I would like to study how we scrap them, not how to retain them,” Reuters reported him saying. This is a surprising position from someone inside the fervently pro-nuclear Abe government and it remains to be seen whether he will be allowed to translate his position into policy.

Dumping Fukushima Daiichi’s accumulated radioactive water has long been the plan proposed by Tepco, the site owner. Fukushima fishermen, along with some scientists and a number of NGOs from around the world, continue to object.

We addressed this issue briefly on a recent TRT broadcast (see video below).

Cooling water is needed at the Fukushima site because, when Units 1, 2 and 3 lost power, they also lost the flow of reactor coolant, causing their cores to overheat. The fuel rods then melted, and molten fuel dripped down and burned through the pressure vessels, pooling in the primary containment vessels. Units 1, 3 and 4 also suffered hydrogen explosions. Each day, about 200 metric tons of cooling water is used to keep the three melted cores cool, lest they once more go critical. Eventually the water becomes too radioactive and thermally hot to be re-used, and must be discarded and stored in the tanks.

As Greenpeace International (GPI) explained in remarks and questions submitted during a consultative meeting held by the International Maritime Organization in August 2019:

“Since 2011, in order to cool the molten cores in the Tokyo Electric Power Company Fukushima Daiichi reactor units 1-3, water is continuously pumped through the damaged Reactor Pressure Vessels (RPVs) and circulated through reactor buildings, turbine buildings, the Process Main Building and the “High Temperature Incinerator Building”  and water treatment systems.

“As a result, the past eight years has seen a relentless increase in the volume of radioactive contaminated water accumulating on site. As of 4 July 2019, the total amount of contaminated water held in 939 storage tanks at the Fukushima Daiichi plant (units 1-4) was 1,145,694 m3 (tonnes). The majority of this, 1,041,710 m3, is contaminated processed water. In the year to April 2019, approximately 180 m3/day of water was being circulated into the RPVs of units 1-3.”

In addition to the cooling water, the tanks also house water that has run down from the nearby mountains, at a rate of about 100 tons each day. This water flows onto the site and seeps into the reactor buildings. There, it becomes radioactively contaminated and also must be collected and stored, to prevent it from flowing on down into the sea.

The water tank crisis is just one of multiple and complex problems at the Fukushima Daiichi site, including the eventual need to extract the molten fuel debris from inside the stricken reactors. Decommissioning cannot begin until the water storage tanks are removed.

Tepco has tried to mitigate the radioactive water problem in a number of ways. The infamous $320 million ice wall was an attempt to freeze and block inflow, but has had mixed results and has worked only intermittently. Wells were dug to try to divert the runoff water so it does not pick up contamination. The ice wall has reportedly reduced the flow of groundwater somewhat, but only down from 500 tons a day to about 100 tons.

In anticipation of dumping the tank water into the Pacific Ocean, Tepco has deployed an Advanced Liquid Processing System that the company claims can remove 62 isotopes from the water — all except tritium, which is radioactive hydrogen and therefore cannot be filtered out of water. (Tritium is routinely discharged by operating commercial nuclear power plants). 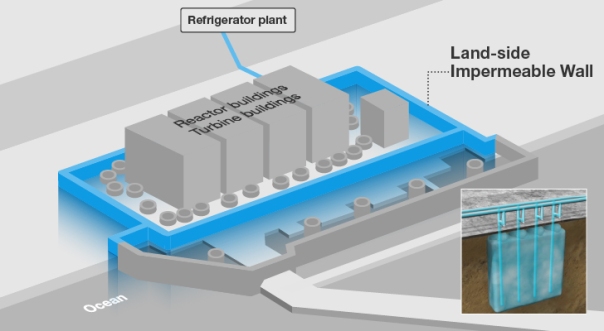 But, like the ice wall, the filtration system has also been plagued by malfunctions. According to GPI, Tepco admitted only last year that the system had “failed to reduce radioactivity to levels below the regulatory limit permissible for ocean disposal” in at least 80% of the tanks’ inventory. Indeed, said GPI, “the levels of Strontium-90 are more than 100 times the regulatory standard according to TEPCO, with levels at 20,000 times above regulations in some tanks.”

The plan to dump the water has raised the ire of South Korea, whose fish stocks would likely also be contaminated. And it has introduced the question of whether such a move is a violation of The Conventions of the Rights of the Child and the Universal Declaration of Human Rights, as was raised in a joint written statement by the International Association of Democratic Lawyers and Greenpeace International, before the UN Human Rights Council currently in session.

So what else could or should Tepco do, if not dump the water offshore and into the ocean? A wide consensus amongst scientific, environmental and human rights groups is that on-site storage for the indefinite future is the only acceptable option, while research must continue into possible ways to extract all of the radioactive content, including tritium.

Meanwhile, a panel of experts says it will examine a number of additional but equally problematic choices, broadly condensed into four options (each with some variations — to  dilute or not to dilute etc):

Arnie Gundersen of Fairewinds, recommends a chemical injection processes (drilling mud) — also used by the oil industry — to stop the flow of water onto the site entirely. But he says Japan has never considered this option. GPI contends that Japan has never seriously researched any of the alternatives, sticking to the ocean dumping plan, the cheapest and fastest “fix.”

All of this mess is of course an inevitable outcome of the choice to use nuclear power in the first place. Even without an accident, no safe, permanent storage solution has been found for the high-level radioactive waste produced through daily operation of commercial nuclear power plants, never mind as the result of an accident.

According to Dr. M.V. Ramana, by far the best solution is to continue to store the radioactive water, even if that means moving some of the storage tanks to other locations to make more room for new ones at the nuclear site. The decision to dump the water, Ramana says, is in line with Abe’s attempts to whitewash the scene before the 2020 Tokyo Olympics and claim, as he has publicly in the past, that everything at Fukushima is “under control.” (Baseball and softball games will be played in Fukushima Prefecture and the torch relay will start there, all in an effort to pretend there are no dangerous nuclear after-effects remaining in the area.)

“The reason that they keep saying they need to release it is because they might have to move some of this offsite and that goes against the Abe government’s interest in creating the perception that Fukushima is a closed chapter,” Ramana wrote in an email. “So it is a political decision rather than a technical one.”

As with all things nuclear, there are diverging views on the likely impact to the marine environment and to human health, from dumping Fukushima’s radioactive water into the ocean. These run the gamut from “a little tritium won’t hurt you” to “the Pacific Ocean is dead thanks to Fukushima” — both of which are wildly untrue. (Tritium can bind organically inside the body, irradiating that person or animal from within. The many problems in the Pacific began long before Fukushima and are likely caused by numerous compounding factors, including warming and pollution, with Fukushima adding to the existing woes.) 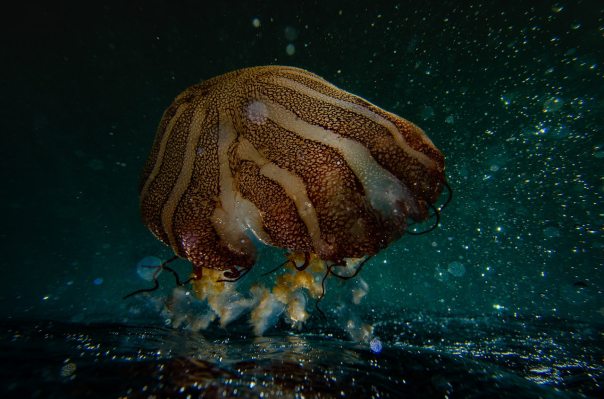 The effect on deep sea creatures of radioactive ocean dumping could be long-lasting. (Photo: Emiliano Arano for Pexels)

What is fact, however, is that scientists have found not only the presence of isotopes such as cesium in fish they tested, but also in ocean floor sediment. This latter has the potential to serve as a more long-term source of contamination up the food chain.

But it is also important to remember that if this radioactive water is dumped, it is not an isolated event. Radioactive contamination in our oceans is already widespread, a result of years of atmospheric atomic tests. As was reported earlier this year, scientists studying deep-sea amphipods, retrieved from some of the deepest trenches in the ocean — including the Mariana Trench which reaches 36,000 feet below sea-level and is deeper than Mount Everest is high — detected elevated levels of carbon-14 in these creatures.

“The levels closely matched abundances found near the surface of the ocean, where the amount of carbon-14 is higher than usual thanks to nuclear bomb tests conducted more than half a century ago,” reported Smithsonian Magazine.

Weidong Sun, co-author of the resulting study, told Smithsonian Magazine that “Biologically, [ocean] trenches are taken to be the most pristine habitats on Earth”.

How chilling, then, to realize that our radioactive irresponsibility has reached the lowest depths, affecting creatures far removed from our rash behaviors.

Consequently, the decision by the Japanese government to release yet more radioactive contamination into our oceans must be viewed not as a one-off act of desperation, but as a contribution to cumulative contamination. This, added to the twin tragedies of climate crisis-induced ocean warming and plastics and chemicals pollution, renders it one more crime committed on the oceans, ourselves and all living things. And it reinforces the imperative to neither continue nor increase our reckless use of nuclear power as an electricity source.

For an in-depth look at this issue, read the January 2019 Greenpeace Germany briefing, TEPCO Water Crisis (in English.)

← Hanford’s Dirty Secret
Standing up and fighting back →