Standing up and fighting back

Posted on September 20, 2019 by beyondnuclearinternational

Reflections on the September 20 climate strike in Washington, DC

In 1968, German students were on the march. The 68ers protest movement was in the streets, outraged largely at government authoritarianism, as well as their own economic struggles. What they also spawned was a culture of mistrust in the government, and a willingness to mobilize in huge numbers.

Arguably, it was the 68ers whose actions spawned the German climate movement, one which incorporated the many strands that are siloed elsewhere — pro-renewable energy, anti-war, anti-nuclear power and anti-nuclear weapons.

What the 68ers were also rebelling against, of course, was the complicity of their parents in Nazism. Their protests were fueled by the anger and betrayal they felt. They had inherited a country that was forever stained by the grossest acts of barbarity imaginable. Why hadn’t their parents stopped it? They knew. They must have known. Why didn’t they act?

Some Germans did act of course. But not enough.

Now, some of us are the generation that those culpable German parents were then. And we are being asked the same question, this time about the climate crisis. Surely we knew? The evidence was always there. Why didn’t we act?

Some of us did, of course. But not enough.

On September 20, sitting packed together among young people on the sloping lawns in front of the Capitol, it was hard not to feel a sense of guilt and shame, even if some of us are among those who did strive to draw attention to the on-rushing disaster that is the climate crisis and now work today to try to salvage our planet from its destructive grasp.

After all, failing to act in time on climate change is perhaps the grossest act of barbarity of all time. It is a crime against humanity. Those still stalling — and worse, undoing — action on the climate crisis, belong on trial at the International Criminal Court in the Hague.

Jansikwe Medina-Tayac, an indigenous activist from Takoma Park, Maryland, was the first speaker at the #ClimateStrikeDC

As the restless crowd anticipated the superstars, murmuring the name “AOC”, it was instead beautifully and wisely given to indigenous youth to open the proceedings at the microphone.

First up was a young woman with familiar corkscrew curls and a passion that has been fomenting for more of her young years than should have been necessary. I have watched Jansikwe Medina-Tayac since she was a little girl, walking back and forth twice a day past my house to school. Now, she is there, leading off the day, with a clarion call to remember on whose land we stand and how we got to this predicament. A member of the Piscataway Indian Nation, she first celebrated the beautiful place in which we were gathered, then reminded us of how it had been stolen from her people and paved over, and of the disproportionate burden placed on people of color by the growing hardships of the climate crisis.

She was followed by other young indigenous women, all of them our own Greta Thunbergs, all of them powerfully articulate, all of them not heard enough. None of them destined to be on the nightly network news.

More young people spoke. And the politicians too, of course. The good ones. The ones who are trying to do something. Needless to say, it was a receptive audience. And a serious one. This was not a day to see who had the coolest signs. Rather, most were all too aware that marches and rallies and strikes and protests were just a small part of the greater challenge to come: How to make the powerful act, or how to seize power and ensure there is action?

A seasoned protester reminded marchers of the connection between war and the climate crisis.

The crowd at the Capitol was filled with young people. And the old. And a few in between. But mainly it was today’s activists and the generation that now constitutes their grandparents, the activists of old who still turn out, their commitment undimmed, to every rally and march — as they did for peace and against nuclear weapons in the 1950s to 1980s. On the sidelines, a familiar friend even held a sign reminding us of that link: “War Accelerates Climate Change.”

And then, as the afternoon wanes, we pack up our signs and flow homeward. And there we contemplate how tarnished the joys of parenting have become when you cannot, in all sincerity, celebrate your children’s hopes and dreams because of the lurking sense of foreboding that the world that awaits them may be too chaotic a place in which to realize them. 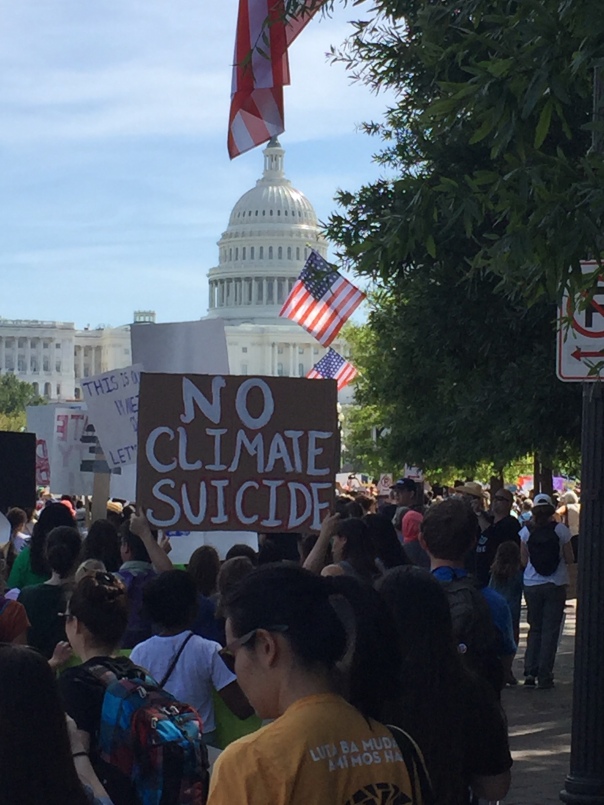 Climate strikers in DC marched to the Capitol.

And what answers do we have, even those of us who, like Cassandras, endeavored to sound the alarm and push for solar and wind power even decades ago? What do we say, when our children, graduating high school or college, turn to us — in fear and sometimes despair — and ask us why they bothered chasing those dreams? What was the point of working so hard, of harboring passions they may never fulfill, they ask us? “I won’t be able to do any of it now anyway,” they say. “We aren’t even going to have a world we can live in.”

And all we can say is the same thing the climate striking youth chanted, a teeming mass of optimism and determination. “The oceans are rising and so are we.” “No more coal, no more oil, keep your carbon in the soil!” “Stand up, fight back!” And, yes, “This is what democracy looks like!” Let’s hope democracy is listening.

All photos by the author unless otherwise indicated.