Humans of the Polygon

Posted on October 27, 2019 by beyondnuclearinternational

It has been thirty years since the last Soviet test rocked the Semipalatinsk Polygon in Kazakhstan, but its dark legacy still haunts people who live nearby. The victims, now in their fourth generation, continue to pay the price for the Soviet nuclear might. Together, with two colleagues, we embark to meet them in the villages of Karaul, Znamenka (Kokentau), and Sarzhal.

The first and youngest victim we meet is a sweet six-month-old baby boy named after Kazakhstan’s first president. Nursultan has a benign tumor of bright red color on his head and six fingers on his left hand. His mom, a young woman in her 20s, tells us she heard that the extra limb could be removed with a laser. When I do my research later, I cannot find any references to that being possible with a laser. Instead, traditional surgery is recommended within the first month of birth.

We do not know if Nursultan’s parents will go for a surgery, but his mom worries that, if left like that, her boy will be teased later in life. Nursultan smiles at us with his happy toothless smile, unaware of his predicament. The disease, known by its scientific name of polydactyly, is caused by a genetic mutation.

The same day we meet a small girl who is missing four fingers on her hand, a genetic mutation similar to Nursultan’s. Her family is kind enough to receive us and share their story. Their other daughter faced cancer and survived after persevering through two years of chemotherapy. Now she is free of cancer but needs regular checks for the benign tumor that remains on her face bone. These checks can only be done in larger cities, and travel requires financial resources that the family does not have. “We reached out to a charity organization, but they told us because she was cancer-free, they couldn’t help,” they tell us. A few years ago, these parents already lost another daughter to sudden pneumonia. She was six.

The elderly couple we visit next appears to be well into their late 70s or early 80s. “At least, they lived to this old age,” I catch myself thinking, knowing that many locals do not live to retirement. They are alive, but their quality of life appalls me. I fight back the tears. There are DIY crutches next to the old man’s bed: they look like they are made of sturdy tree branches. He doesn’t leave the house because he doesn’t have a wheelchair. His wife explains that they lost the documents confirming their status as victims of nuclear testing, and that makes seeking help from the social protection services hard.

From the medics we hear stories of too many people dying young, too many cancers, and too many sick children. With better prenatal screening, doctors can identify pregnancies that will result in the birth of deformed children. “If there is a pathology, the decision how to proceed is made in ‘the city,’” referring to the nearest major city of Semey. In other words, such pregnancies end in abortions in most cases.

It is pretty clear that not all of this devastating data is reflected in official statistics. It is impossible to determine the main culprit of the locals’ poor health: the long-term exposure to radiation during and after the forty years of nuclear tests; the poor environmental situation because of the gold and coal mines nearby; the lack of good medical infrastructure—a problem endemic to both this area and the rest of the rural areas across the country; or all these factors combined. One thing for certain, we see with our own eyes that people continue to suffer.

Stronger Than Death memorial for victims of the nuclear tests. It depicts a mother covering her child from a bomb

It is not only the locals’ serious health issues, but also the standard of living that is painful to witness. Locals complain about the lack of jobs, a common problem for the rural areas in Kazakhstan, but especially devastating for places that already suffer so much from the consequences of nuclear testing. In smaller villages that we visit, even the mayors’ offices and clinics do not have modern restrooms but wooden sheds with cesspits outside. For a country that boasts the upper-middle income status and strives to join the thirty most developed nations, this is a shameful sight. We are only about an hour by plane away from Kazakhstan’s glitzy capital, a city that hosts million-dollar international events, including conferences celebrating Kazakhstan’s decision to close the Polygon. 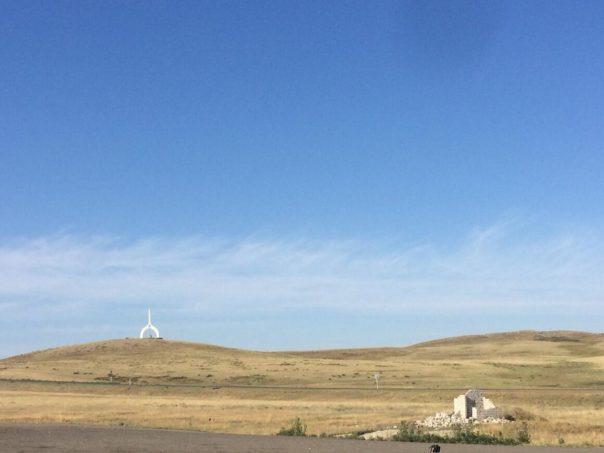 In the land of Abai and Mukhtar Auezov

It would be a devastating trip if not for the glimpses of hope, resilience, and love for the native land that we encounter along the way. There is an almost mystical feeling of sacred space when you visit the native land of Kazakhstan’s most revered poets and writers – Abai, Shakarim, and Mukhtar Auezov. Locals are proud to share their roots with these enlightened men and talk about their land with so much love. A phrase we heard often is “Tugan zher,” ‘place of birth’ in Kazakh. The harsh beauty of the endless steppe is mesmerizing. 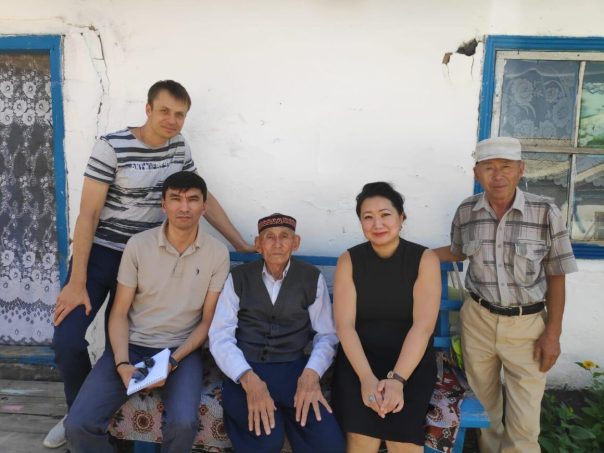 There is a quiet resilience in the people we meet. They share their stories without drama. The calm voices in which they tell us about the tragedies they continue to endure pierce harder than any scream ever could. They manage to go on despite their losses and hardships. Parents who have lost a child are putting all their heart into bringing up their small daughters – bright and cheery girls who love singing and dancing. A crippled man who cannot stand straight due to a large hump on his back manages to earn a living and support his family. He owns livestock and has learned electric welding. He proudly tells us about a garage he built thanks to his newly acquired skills. The high school teacher who lost his son to suicide and lost numerous classmates, neighbors, and friends to illness, is recording their names and stories so that they are never forgotten. The local medics, the quiet heroes, do what they can to help their fellow villagers, despite their own stories of illnesses, miscarriages, and deaths of loved ones.

Our most memorable encounter happens in the village formerly known as Znamenka (now Kokentau). It is a small rural settlement with just over a thousand residents. Similar to other villages we visited near the Polygon, it struggles. While Znamenka formerly boasted large numbers of livestock, the only current source of employment for its residents is the nearby coal mine – hard labor that comes with a health cost. 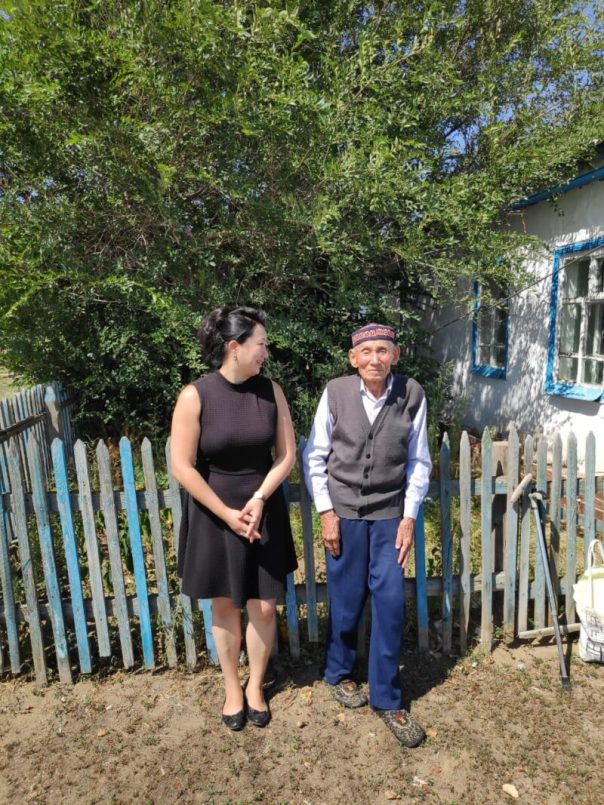 With the surviving eyewitness of Soviet nuclear testing, Znamenka (Kokentau)

We meet an elder, one of the few surviving witnesses of the nuclear tests. His mind is sharp; he remembers all the dates and details of major tests, and his memory never falters. He lost two of his children when they were in their early 50s and tells us about too many funerals that happen in this small community. He is sad his village is no longer what it used to be, but once we switch the subject to the importance of family, he lights up with joy, proud of his big family, grandchildren, and great-grandchildren. Two of his grandsons play happily nearby as we speak.

I look at them and think about all the kids we have met. I hope against hope that they grow up healthy and happy.

Dr. Togzhan Kassenova is a senior fellow with the Project on International Security, Commerce, and Economic Statecraft (PISCES) at the Center for Policy Research, SUNY-Albany. She is also a senior non-resident scholar at the Institute for International Science and Technology Policy and adjunct faculty at the Elliott School of International Affairs at George Washington University, and a nonresident fellow at the Carnegie Endowment for International Peace.

This article first appeared on VOICES on Central Asia, and is republished with kind permission. Voices on Central Asia is a collaboration platform between the Central Asia Program (CAP) and the Central Asian Analytical Network (CAAN), both part of The George Washington University‘s Institute for European, Russian, and Eurasian Studies (IERES).

Headline photo: The lake created in 1963 on the Polygon as a result of an explosion that used 20 tons of conventional explosives (an imitation of a nuclear explosion).

The author is grateful to the Center for International Security and Policy (CISP), Kazakhstan, for making the trip possible. All photos by: CISP and author.

2 Comments on “Humans of the Polygon”