Space Force is no laughing matter

Posted on May 31, 2020 by beyondnuclearinternational

What started as “a joke” his now deadly serious; and just plain deadly

Beyond Nuclear has been publishing a series of informational booklets that, taken together, comprise The Case Against Nuclear Power: Facts and Arguments from A-Z. To date, we have focused on nuclear power on Earth. But with Trump’s ominous creation of the U.S. Space Force, the possibility of nuclear-powered weapons — for the purposes of war — moved one, or possibly several, steps closer.  Accordingly, we have shifted our horizons to include the heavens. Our newest handbook is about the Space Force.

Space Force has just launched.  On Netflix. It’s a reboot of a chronically bad 1978 TV movie of the same name. The older version featured a crew of astronauts tasked with keeping “the galaxy from getting worse”. It was a comedy, or trying to be. So is the new series, starring Steve Carell, or at least it, too, is trying to be. (If only they had let Armando Iannucci write it).

(None of this is to be confused with the Saturday launch of SpaceX, another topic and possibly for another time).

The Carell series endeavors to poke fun at the real Space Force, an expensive and dangerous reality created by Trump last December. But even that Buffoon in Chief said the idea for an actual US. Space Force started out as a joke. 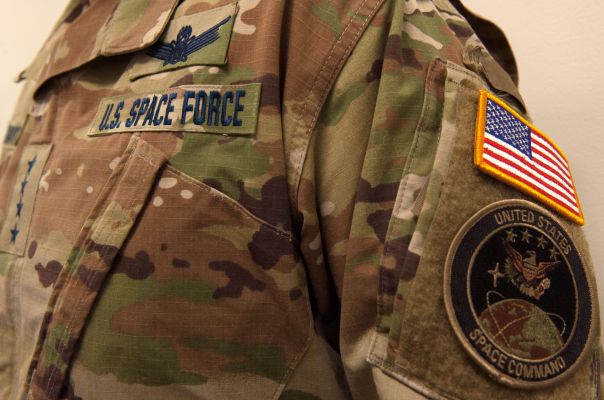 The Space Force will be wildly expensive and could lead to war — and the use of nuclear weapons — in space. (Photo: Wikimedia Commons)

Consequently, when space is viewed as “a warfighting domain” that could utilize nuclear-powered battle platforms and lasers, we have no choice but to extend our opposition to nuclear power beyond Earth’s boundaries.

The nuclear weaponizing of space has, to date, captured too little attention among politicians and the press. The new Beyond Nuclear booklet — The U.S. Space Force and the dangers of nuclear power and nuclear war in space— is intended, in some small way, to help redress that imbalance. You will find it on our Handbooks page.

The U.S. Space Force was initiated by the Donald J. Trump administration as a sixth branch of the United States armed forces. The Space Force was officially established on December 20, 2019 when Trump signed the National Defense Authorization Act (NDAA) for 2020, a $738 billion military policy bill that provided funding for its creation.

But on May 15, 2020, the rhetoric became more menacing, with an unprecedented shift in priorities. During a speech to unveil the new Space Force flag, Trump declared that “Space is going to be…the future, both in terms of defense and offense [emphasis added].” Previously, as with the notorious Missile Defense System, the public position was always about the need for a defensive approach. But Trump now appeared to be talking about U.S.-initiated aggression.

Why do we need a Space Force?

We don’t. A Space Force will weaponize space, increase the likelihood of war in space, and could potentially introduce the use of nuclear-powered battle platforms in space.

The official reason, as asserted by Trump and the U.S. military, is that a Space Force is needed because China and Russia have been moving into space militarily. But it appears that the true aggressor is the U.S.

China and Russia — along with Canada — have led efforts for decades to expand the Outer Space Treaty of 1967 and ban all weapons in space. The Outer Space Treaty provides that nations “undertake not to place in orbit around the Earth any objects carrying nuclear weapons or any other kinds of weapons of mass destruction, install such weapons on celestial bodies, or station such weapons in space in any other manner.”

China, Russia and Canada have led calls for the ratification of the Prevention of an Arms Race in Outer Space or PAROS treaty, barring all space weaponry. But although the PAROS treaty has had overwhelming support at the United Nations, year after year the U.S. has voted against it, vetoing its passage.

Despite pushing for years to expand the Outer Space Treaty and to forbid the deployment of any weapons in space, Russia and China will not sit back as the U.S. forms a Space Force and seeks “American dominance in space”. They will meet the U.S. in kind. And they will likely be followed by other nations, turning space into a war zone. 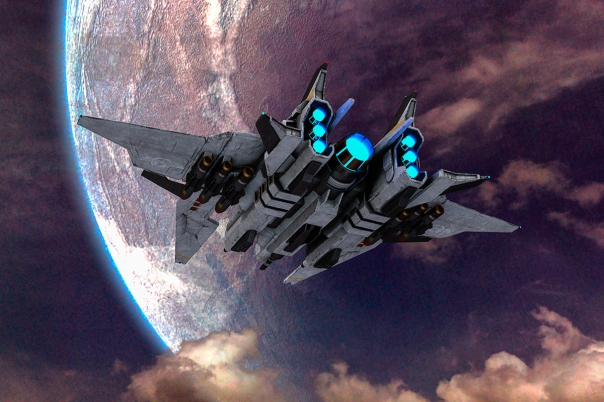 How did the Space Force come to be created?

Trump’s call for a Space Force started off as a joke, during a speech before a crowd of Marines in San Diego. But the joke was soon on us. With the passage of the $738 billion National Defense Authorization Act, in December 2019, the U.S. Space Force became a reality. The bill passed the Democratically-controlled House of Representatives due to a trade-off for paid parental leave for civilian federal employees inserted into the language.

How much will it cost?

The vast costs will be shouldered by taxpayers, likely by slashing funding for essential social needs. The aerospace industry has suggested defunding “entitlement programs” to pay for “everything space.” That would likely include cutting Social Security, Medicare, and Medicaid among other social and welfare programs. In his proposed fiscal year 2021 budget, Trump is recommending $15.4 billion for the Space Force. The Space Force, if it is allowed to continue, will clearly be a multi-billion dollar annual affair.

Who will profit?
Raytheon is emerging as a major beneficiary of Space Force work. Perhaps not uncoincidentally, Mark Esper, Trump’s U.S. Secretary of Defense at the time the Space Force was announced, is a former lobbyist for the corporation. Other major contractors for the Space Force will be Northrop Grumman, Boeing and Lockheed-Martin, the world’s biggest military contractor.

What is the mission of the Space Force?
The language used by the Trump administration suggests that the Space Force will stray well beyond protecting satellites and sees space as a “warfighting domain” where the Space Force must establish and maintain dominance.

In March 2020, the Space Force deployed its first “offensive weapons system” designed to “deny adversary satellite communications.” It is an upgraded version of a ground-based satellite communications jamming system. But soon Trump began to talk about hypersonic “super duper” missiles. Space will undoubtedly become a new frontier for these as well.

Indeed, as The Drive described the new weapon in a headline: “Space Force Just Received Its First New Offensive Weapon.” The subhead read: “This is just one of two acknowledged U.S. ‘counterspace’ capabilities, but there are more in the classified realm.”

U.S. president, Ronald Reagan, was inspired to launch his “Star Wars” concept by Dr. Edward Teller, the main figure in the development of the hydrogen bomb. Teller’s plan centered on orbiting hydrogen bombs that would energize X-ray lasers. The official name of the program was the Strategic Defense Initiative, quickly nicknamed “Star Wars” but also known for short as SDI.

The original hydrogen bomb/X-ray scheme was scuttled in favor of other space-based weaponry, notably hypervelocity guns, particle beams and laser weapons. To manage “Star Wars,” a U.S. Space Command was set up in 1985, dissolved in 2002, and reactivated in 2019.

It was Reagan’s fantasy about space weapons that derailed the opportunity for the U.S. and the then Soviet Union to fully disarm and draw down their nuclear weapons arsenals. Then Soviet premier, Mikhail Gorbachev, had told Reagan before their famous 1986 summit in Reykjavik, Iceland, that if the U.S. gave up the militarization of space, the Soviets would be willing to reduce all their nuclear forces to zero.

But Reagan refused to let go of SDI, a program that had not yet been invented and eventually developed into a deeply flawed and wildly expensive program that cannot deter or deflect incoming missiles with the essential 100% accuracy. While professing a desire to eliminate nuclear weapons, Reagan saw his space missile program as a guarantee against any failure by an opponent to do so. The Soviets wanted Reagan to confine the SDI research to the laboratory for the next ten years. But Reagan stubbornly refused.

In the end, as Jacob Weisburg described it in an article for The Atlantic in January 2016, “This seemingly minor disagreement about how long SDI research would stay confined to the laboratory blocked what would have been the most sweeping arms-control agreement in history.”

Nuclear power as an energy source for space weaponry has been advocated in U.S. military documents and plans for decades. The original plan for Reagan’s first iteration of “Star Wars” was predicated on orbiting battle platforms with nuclear reactors and plutonium systems on board, providing the power for hypervelocity guns, particle beams and laser weapons, all of which require large amounts of energy.

The U.S. Space Force scheme is very much an encore of “Star Wars”, and the energy needed to power weapons that would be deployed in space would likely be nuclear-powered.

How can we stop the Space Force and its vast, unnecessary cost?

(a) Join the Global Network Against Weapons & Nuclear Power in Space. Its website is at www.space4peace.org. The Global Network holds annual international meetings, conducts protests, and is the prime sponsor of a yearly “Space For Peace Week” with gatherings and demonstrations all over the world.

(b) Contact your members of Congress. Bruce Gagnon emphasizes that the Achilles heel of the Space Force scheme is the huge amount of money—the billions—needed  to finance it. He urges U.S. citizens to ask their representatives and senators to vote against all funding.

Action at the grassroots is imperative.

Space is for wonder, not warfighting. It’s where we live. We are a small dot in the midst of enormity, floating in a dark vastness about which we know a surprising amount, and yet with so much more still yet to discover. But if the heavens are armed, there will be no going back.

We must all join together to stop this unparalleled catastrophe in the making. More than half of U.S. discretionary spending already goes to the military, with just slivers left for essential services such as health care, education and social services. As the world grapples with climate change and pandemics, it has never been more urgent to avoid arming our final frontier — space — with deadly weapons of mass destruction. The Space Force will not “Make The Galaxy Great Again” as its supporters have emblazoned on t-shirts. But we can, by ensuring that space — as well as Earth— is a place for peace.

Go to the Handbooks page to download copies of the Space Force booklet. Or you may order printed copies from Beyond Nuclear by calling 301.270.2209 or emailing linda@beyondnuclear.org. When ordering printed copies we ask that you consider a small donation to cover the costs of printing and postage.

5 Comments on “Space Force is no laughing matter”