Radioactivity under the sand

Posted on July 4, 2022 by beyondnuclearinternational 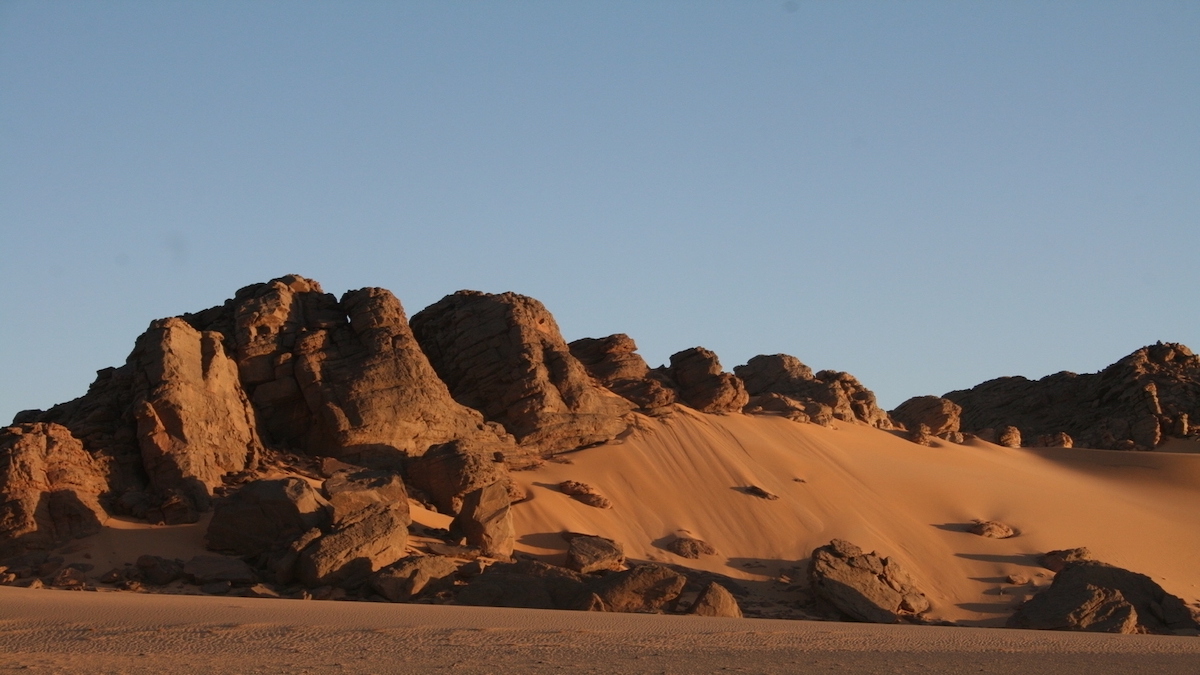 The buried waste from French nuclear tests in Algeria

By Jean-Marie Collin and Patrice Bouveret

The following is the summary from the longer report, which can be read here.

The Hoggar massif is located in the west of the Algerian Sahara. Prehistoric men have left stunning rock carvings there. The men of the 20th century left nuclear waste.

Between 1960 and 1996, France carried out 17 nuclear tests in Algeria and 193 in French Polynesia. In Algeria, atmospheric and underground tests were carried out at the Reggane and In Ekker sites, in an atmosphere of secrecy and conflict between an Algerian nation under construction and a colonial power seeking strategic autonomy. A majority of the tests – 11 – were carried out after the Evian agreements (18 March 1962), which established Algeria’s independence.

It was not until the 1990s that the first independent studies relating to some of the dark events of that period finally became available. Disclosure about accidents that happened during some of the tests, about the risk that populations and soldiers were exposed to, in Algeria and in Polynesia alike, led to the implementation of the law “on 5 January 2010, granting recognition and compensation for the victims of French nuclear testings“. But this law does not take into account any environmental consequences.

In French Polynesia, the strong mobilization of many associations has enabled the environmental consequences to be taken into account and the first remediation steps to be put in place. For Algeria, the situation is different. Due to a tumultuous Franco-Algerian relationship, the absence of archives, and the absence of registers of local workers who participated in the tests, the data on the consequences of the tests remains patchy and incomplete. It was only in 2010, thanks to independent expertise, that a map from the Ministry of Defense was revealed, showing that the European continent was also affected by fallout from the nuclear tests carried out in the south of the Sahara.

Even if today we have better knowledge of nuclear test accidents and their consequences, there is still a lack of key information as to the existence of large quantities of nuclear and non-nuclear waste to ensure the safety of populations and environmental remediation.

From the beginning of nuclear tests, France set up a policy of burying all waste in the sands. The desert is seen as an “ocean”, from a common screwdriver – as it is shown in the study by “Secret Defense” documents and photos – to planes and tanks: everything that may have been contaminated by radioactivity had to be buried. France has never revealed where exactly this waste was buried, or how much of it was buried. In addition to these contaminated materials, voluntarily left on site to future generations, there are two other categories: non-radioactive waste (resulting from the operation and dismantling of the sites and the presence of the Algerian army since 1966) and radioactive materials emitted by nuclear explosions (vitrified sand, radioactive slabs and rocks). Most of this waste is left in the open, without being secured in any way, and is accessible to the local population, creating a high risk for health and environmental damage.

A 1997 report from the French parliamentary office for evaluating scientific and technological options [Office parlementaire d’évaluation des choix scientifiques et technologiques] stated “There is no precise data on the issue of waste materials which could have resulted from the series of experiments conducted in the Sahara”.

The current study “Radioactivity Under the Sand” is an initial response and thus establishes an inventory of the waste materials in these areas, particularly radioactive ones. This waste should be subject to in-depth identification and recovery work in these areas by specialised teams involving independent observers.

This work now appears to be a possibility with the adoption of the Treaty on the Prohibition of Nuclear Weapons (TPNW) on 7 July 2017. The articles 6 (“Victim assistance and environmental remediation”) and 7 (“International cooperation and assistance”) include positive obligations to ensure that contaminated areas are fully known – to protect people, future generations, the environment and wildlife from this pollution. This study is therefore also part of the implementation of this right currently being created.

France and Algeria are on opposite sides in this regard. One is a “nuclear-weapon” and the other a “non-nuclear-weapon” State according to the Nuclear Non-Proliferation treaty, and they have opposing views regarding the TPNW. France has constantly denounced it. Algeria has participated in TPNW negotiations, signed the treaty and begun its ratification process. Once the treaty is ratified by the Algerian State and enforced, Algiers will have to start implementing its positive obligations (articles 6 and 7).

Even if France refuses to bind itself to the TPNW, it could participate in this process. Indeed, the opening of “a new chapter in their relationship”, according to the Algiers Declaration in 2012, like the ongoing initiatives (combined working group dedicated to compensation for the Algerian victims of French nuclear tests, the high-level Algerian-French intergovernmental committee) shows that this cooperative work can be carried out, without France breaking with its current position on the TPNW. There are several examples of inter-state cooperation in establishing aid programmes, even when these countries have had a turbulent history; just as there is at least one example of participation of a country in a programme for rehabilitation of the environment, even when, from a legal aspect, the country was not compelled to do so.

These cases could set an example for the cooperation between France and Algeria.

This study thus proposes a set of recommendations (measures to enable discussions between the two countries in order to improve the humanitarian situation; measures concerning nuclear waste; health protection measures; actions to be taken among the local population; rehabilitation and protection of the environment, to bring about changes for this dark page of history between France and Algeria.

The “nuclear past” should no longer remain buried deep in the sand.

French political and military authorities waited almost 50 years before acknowledging the consequences for health and environment from the atmospheric and underground nuclear tests which were conducted in the Algerian Sahara and then in French Polynesia between 13 February 1960 and 27 January 1996.

The situation regarding the French nuclear test sites in the Sahara is special. Algeria is the only state to have gained independence while its “coloniser” was conducting tests on its territory. Of the 17 French nuclear tests in the Sahara, a majority (11 tests, all underground) were conducted following the Evian Accords (18 March 1962), which signalled Algeria’s independence after a particularly deadly war.

In reality, Article 4 of the declaration of principles in the Evian Accords, dated 19 March 1962, relating to military issues, allowed France to use the sites in the Sahara until 1967: “France will use for a period of five years the sites that comprise the installations at In Ekker, Reggane and all of Colomb-Béchar-Hammaguir, the perimeter of which is marked in the attached map, in addition to corresponding technical tracking posts.“

However, considering the context, at the time there was no negotiation of any obligations for complete dismantling, for environmental remediation or for monitoring the health of people in the area. As a consequence, “after seven years of varying experiences, the two sites at Reggane and at In Ekker were handed over to Algeria without providing for any procedures to control and monitor radioactivity.” It even appears that “the political circumstances, which led to these two sites being abandoned, may explain the indifference, that has been shown [by France] in addressing these problems. Nevertheless, the fact remains that a certain lack of concern has been displayed, to put it mildly.”

Before and after photos of the effects from a nuclear blast on the material placed in a launch zone in Algeria. (Photo: Radioactivity Under the Sand report)

The complex postcolonial relationship between these two countries has resulted in the environmental and health impacts of Saharan nuclear tests never really giving rise to official and scientific publications or to cooperation on this issue, either on the part of French or Algerian political authorities. It is therefore striking to note how little interest the environmental and health consequences from nuclear testing in Algeria have aroused over several decades, unlike what happened in French Polynesia – where France conducted 193 nuclear tests. Even today, these consequences remain a complicated subject to discuss.

However, it is necessary to take into account that, until the end of the 1990s, the priority for French and international non-governmental organisations was on stopping nuclear tests; this was achieved in 1995 when the United Nations (UN) adopted the treaty prohibiting all nuclear tests.

The first targeted research into the consequences of French nuclear tests commenced in 1990 with the work by the Observatoire des armements, under the direction of Bruno Barrillot. Faced with the lack of documentation and the power of military secrecy, the aim then was to shed some light on the nuclear testing programme and its consequences, by compiling the largest number of first-hand accounts about the different parties involved, the installation of sites, living conditions and the accidents that occurred both in the Sahara and in French Polynesia.

The adoption of the TPNW on 7 July 2017 opened up a new means of legal recourse. This treaty supplemented the treaty on non-proliferation of nuclear weapons (NPT), in particular by prohibiting (article 1) the use, manufacture or acquisition by other means of nuclear weapons or threats to use nuclear weapons. Moreover, it introduces the particular feature of positive obligations with Article 6 (“Victim assistance and environmental remediation”) and 7 (“International cooperation and assistance”).

The TPNW is a treaty that, as far as its critics are concerned, cannot work without involving the nuclear powers. It is clear that, as long as those who possess nuclear weapons do not become parties to the treaty, the process of actual nuclear disarmament cannot really get underway. However, despite that, the TPNW can still start to take effect, with the implementation of various bans (assistance, investment, renouncing the advantages of “protection” from an allied nuclear power) and also with countries fulfilling their positive obligations.

By drawing on these first-hand reports, various sources of information and the archives, this study compiles an inventory of all the waste materials, in particular those which are radioactive, that were left by France in the Algerian zones of Reggane and In Ekker. The presence of this waste entails considerable risks to the health of local people and future generations; the environment and wildlife are also affected over the long term.

A 1997 report from the French parliamentary office for evaluating scientific and technological options [Office parlementaire d’évaluation des choix scientifiques et technologiques] stated “There are no precise data on the issue of waste materials, which could have resulted from the series of experiments conducted in the Sahara”. This study is an initial response.

Radioactivity Under the Sun is a publication of ICAN France, Observatoire des armaments and Heinrich Böll Stiftung Europe.

Headline photo of the Hoggar massif by Xenus06/Creative Commons

← Lucro em tempo de guerra?
The power of the sun →

4 Comments on “Radioactivity under the sand”