A symphony for Rachel Carson

Posted on December 26, 2021 by beyondnuclearinternational

It’s always a joy to come across extraordinary women. Rachel Carson was certainly one; Marian McPartland, longtime host of the NPR program, Piano Jazz, another.

Who would have thought there was a connection between them? It was therefore another joy to discover that there very much was.

Aside from being a wonderfully talented jazz pianist, McPartland was also an environmentalist. And so, a few months before her 90th birthday, with her show still on the air, McPartland set down an improvised piece of piano music in tribute to Carson. (McPartland hosted Piano Jazz from 1978 until her retirement in 2011. She died in 2013 at 95. NPR retired the show in 2018.)

For McPartland, as for many of us, Silent Spring, Carson’s breakout 1962 masterpiece, was a work of seminal importance. And it was to honor Carson and that book that McPartland composed what became her symphony, A Portrait of Rachel Carson. The orchestration was arranged by New Zealand pianist, Alan Broadbent.

McPartland premiered the work on November 15, 2007 with the University of South Carolina Symphony Orchestra, herself on piano. At the time, she was enduring considerable medical challenges, and announced before the performance that “I can’t walk. I’m in miserable pain. But at the piano, I don’t feel a thing.”

END_OF_DOCUMENT_TOKEN_TO_BE_REPLACED

Posted on December 12, 2021 by beyondnuclearinternational

In light of the accelerating climate crisis, nuclear energy and its place in the future energy mix is being debated once again. Currently its share of global electricity ge­n­eration is about 10 percent. Some countries, international organizations, private businesses and scientists accord nuclear energy some kind of role in the pursuit of climate neutrality and in ending the era of fossil fuels. The IPCC, too, includes nuclear energy in its scenarios.

On the other hand, the experience with commercial nuclear energy generation acquired over the past seven decades points to the significant technical, economic, and social risks involved. This paper reviews arguments in the areas of “technology and risks,” “economic viability,” ’timely availability,” and “com­patibility with social-ecological transformation processes.”

Technology and risks: Catastro­phes involving the release of radioactive material are always a real possibility, as il­lustrated by the major accidents in Three Mile Island, Chernobyl, and Fukushima. Also, since 1945, countless accidents have occurred wherever nuclear energy has been deployed. No significantly higher reliability is to be expected from the SMRs (“small modular reactors”) that are currently at the plan­ning stage. Even modern ma­thematical techniques, such as probabilistic security analyses (PSAs), do not adequa­tely reflect important factors, such as deficient secu­rity arrangements or rare natural disasters and thereby systematically underestimate the risks.

Moreover, there is the ever-present proliferation risk of weapon-grade, highly enriched uranium, and plutonium. Most spent fuel rods are stored in scarcely protected surface containers or other interim solutions, often outside proper con­tainment structures. The safe storage of highly radioactive material, owing to a half-life of individual isotopes of over a million years, must be guaranteed for eons. Even if the risks involved for future generations cannot be authoritatively determined to­day, heavy burdens are undoubtedly externalized to the future.

END_OF_DOCUMENT_TOKEN_TO_BE_REPLACED

What happened at COP26?

Posted on December 12, 2021 by beyondnuclearinternational

The short answers to these questions are simple: in the face of escalating climate breakdown, COP26 did little to shift our trajectory away from catastrophe, away from business-as-usual and towards curbing fossil fuel use. Rich countries have refused to step up and meet their obligations to those who have done the least to cause the climate crisis.

In the words of Greta Thunberg, more “blah, blah, blah”.

And as for what comes next, of course we go on fighting to keep the chance of staying beneath 1.5C alive.

The long version? After two weeks with a flurry of announcements, greenwash, struggles over seemingly minor details of text, and anger from civil society massed on the streets of Glasgow, it’s worth unpacking some of the details of what was really agreed, or not. How does the jargon translate into real world outcomes, literally of life and death? In these details we can see beneath the media spin and glossy announcements the brutal realities of power, money, and neocolonialism.

As the window of opportunity is closing to stay within 1.5C heating and avoid the worst climate catastrophe, where are we left after COP26?

Under the Paris climate deal, nations had to submit updated voluntary commitments to climate action (known as nationally determined contributions or NDCs) before the talks. Unsurprisingly, these are generally lacking in substance or urgency. Many lack clear delivery plans and delay meaningful change until after 2030. Climate Action Tracker’s useful analysis finds that even with all new pledges for 2030, we will still emit roughly twice as much in 2030 as required for 1.5C.

They estimate if all current pledges for emissions cuts by 2030 are met, this gives only a 50% chance of staying below 2.4C.

Of course 1.5C itself is no ‘safe level’. Many areas have already experienced devastating wildfires, floods, hurricanes and heatwaves at 1.1C. These, in combination with longer-term impacts such as drought, disproportionately affect countries who have done least to cause the problem and have fewest resources to deal with them.

END_OF_DOCUMENT_TOKEN_TO_BE_REPLACED

Explosive renewable energy growth in US

Posted on December 5, 2021 by beyondnuclearinternational

According to a review by the SUN DAY Campaign of data recently released by the Federal Energy Regulatory Commission (FERC), solar, wind, and other renewable energy sources (i.e., biomass, geothermal, hydropower) dominated new U.S. electrical generating capacity additions during the first three-quarters of 2021. [1]

Most of the balance was provided by natural gas (2,327 MW) coupled with very small contributions from oil (19 MW) and coal (11 MW).

That growth is almost entirely attributable to a nearly three-fold increase in wind’s share of installed generating capacity and a 37-fold increase in solar’s share. Wind is now more than a tenth (10.52%) of the nation’s generating capacity (up from 3.79% in September 2011) while utility-scale solar has surpassed five percent (5.14%) — up from 0.14% in September 2011 … and that does not include distributed (e.g., rooftop) solar. [2]

END_OF_DOCUMENT_TOKEN_TO_BE_REPLACED

Posted on December 5, 2021 by beyondnuclearinternational 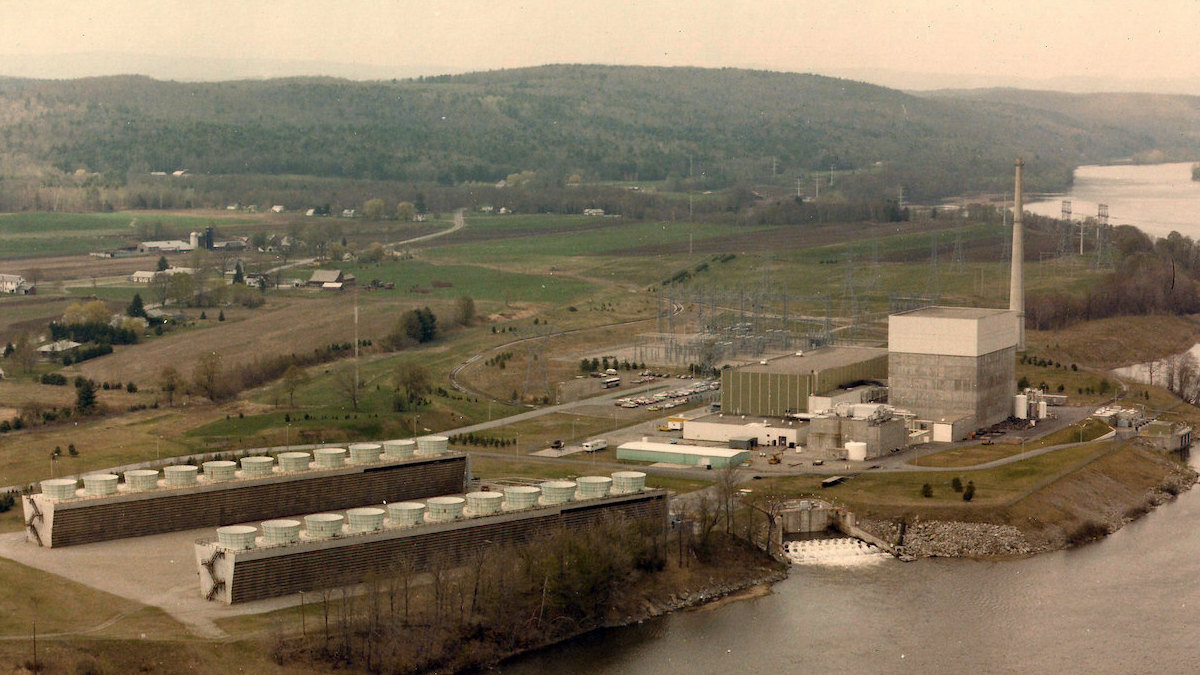 That’s all we have to get Vermont Yankee cleanup right

COVID-19 has reduced the hustle and bustle, letting us think about what is important — or, more correctly, reset our priorities. This is no small thing; in fact, a culture-quake may be necessary before we can adopt the entirely new relationship with nature that must happen if we are to stave off climate change.

To go from environmental thinking globally to acting locally, let’s consider that one of Vermont’s natural, historical treasures — 130 acres of Connecticut River waterfront in the little town of Vernon — is being scarified, dug up, and heaped with demolition debris.

The demolition of Vermont Yankee is being done on schedule and on budget by a subsidiary of NorthStar, a demolition company noted for speed and precision in taking down large buildings, two recently in midtown Manhattan.

But NorthStar and most stakeholders seem to forget that decommissioning is not primarily about how fast and how cheaply you can tear down buildings.

It is about the safe, careful, detailed removal of enough carcinogenic, mutagenic, and teratogenic radioactive contaminants to the point that agreed-upon residual radiation levels will allow open, worry-free access to the site.

The way the U.S. Nuclear Regulatory Commission puts it in its federal regulations (posted at nrc.gov), decommissioning is “the safe removal of a facility from service and reduction of residual radioactivity to a level that permits termination of the NRC license.”

“As one of the conditions for an operating license, the NRC requires the licensee to decommission the nuclear plant after it ceases power operations,” the regulations say. “This requirement is based on the need to reduce the amount of radioactive material at the site to ensure public health and safety as well as protection of the environment.”

END_OF_DOCUMENT_TOKEN_TO_BE_REPLACED

The “brigands” regroup in Basilicata

Posted on November 28, 2021 by beyondnuclearinternational 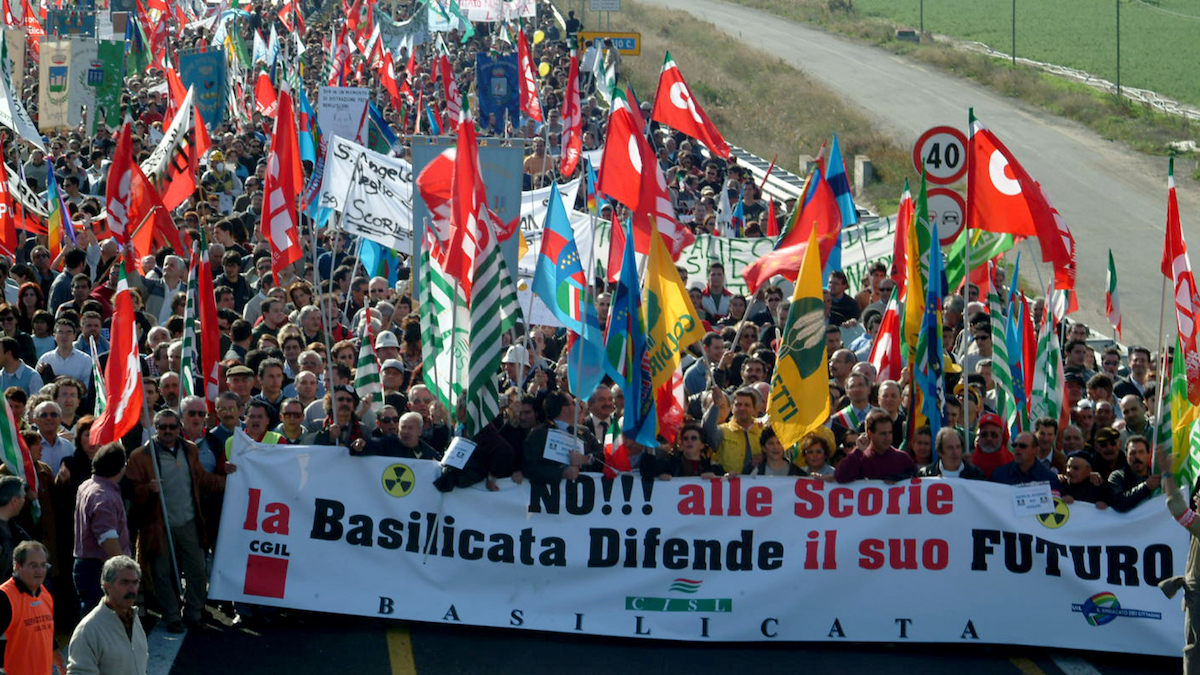 18 years after they stopped a radioactive waste dump coming to their region, locals find their land targeted once again

The brigand songs hadn’t started yet, although there were faint early flickers and crackles coming from a small camp fire. Lights glimmered from inside a distant tent as our escort led us through crowds milling nearby, briefly allowing a television reporter a hurried interview, his deadline already long gone by.

It slowly began to dawn on us then, as we were ushered to sit at a table beneath a hand-painted banner proclaiming “No to Nuclear Waste” that this was a press conference. The rows of seats in front of us were filled to capacity. There was a quick introduction and then we were handed microphones and urged to talk.

We were in Scanzano Jonico in Basilicata, possibly Italy’s least-known Southern province. Valentina, a Greenpeace Italy colleague, and I had driven from Rome, after testifying about nuclear waste before the Italian Parliament (I had been there to deliver, in Italian, the translated testimonies of Kevin Kamps, then with NIRS, and IEER’s Arjun Makhijani).

We had gotten lost on the way on what, under normal circumstances, was already a six-hour drive. We were late and cold and exhausted and we had no idea a press conference had been arranged for us. But that crowd had waited two hours. And now we needed to deliver.

Basilicata is a region nestled in the instep of Italy’s famous “boot”. The area is best known for Sassi, an ancient hillside complex of cave dwellings dating back thousands of years and wedged into the rocks adjacent to the town of Matera. Aficionados of Italian literature might be familiar with Carlo Levi’s book, Christ Stopped at Eboli, also set in the province.

But Basilicata is also the setting for some unexpected triumphs. The first, ironically under Mussolini’s watch, transformed what had been a mosquito-infested unlivable swamp into a market garden, famous for wines, organic farming and eco-tourism. Its beaches began to compete for holiday makers. The earlier mass exodus, which had populated mainly Argentina with exiled Lucani, as those from Basilicata call themselves, had stopped.

The second happened between November 13 and 27, 2003, just weeks before we arrived. An unprecedented and dramatic 15 days of protest had unfolded in Scanzano Jonico, culminating in the defeat of a plan by the Italian government, then led by Silvio Berlusconi, to dump all of Italy’s high-level radioactive waste at a single site at Terza Cavone, a few kilometers from Scanzano, in salt rock at a site just 200 meters from the shoreline.