From tears to joy

“For many Native Americans, the Department of the Interior has been known as a back-alley haven for shills, thieves and crooked, money-hungry American Indian-hating cronies.

“But now, we’ll have one of our own stepping in to run the rats out and right old wrongs.”

That’s how Simon Moya-Smith, an enrolled citizen of the Oglala Lakota Nation and a Chicano writer and journalist, opened his December 18 column for NBCs’ Think, welcoming president elect Joe Biden’s choice of U.S. Representative Deb Haaland for the position of Secretary of the Interior.

The nomination of the New Mexico Democrat, a member of Laguna Pueblo, has blown a fierce gust of fresh air into the musty cabinet rooms of Washington, DC.

“A new scintilla of hope has bloomed among us in part because Haaland, like millions of Indigenous peoples, strongly believes in and practices the Seven Generation rule,” wrote Moya-Smith. “The rule says that all significant decisions must be made with the next seven generations in mind, and includes preserving and protecting the water, the earth and the two leggeds and the four leggeds for people you will never meet — at least in this life.”

For many, the hope is more than a “scintilla”. It’s a big, blinding blast of light, an almost unimaginable transformation in a department that Trump inhabited with a man (Ryan Zinke) who was clueless enough to boast to Native Americans that he rode a horse named Tonto.

And Haaland is ready to shine that light. In a January 3 meeting with environmental justice and tribal leaders, The Hill reported that “Haaland committed to ‘fully’ honoring the U.S.’s treaty obligations to tribal nations and working with leaders to address the ‘disproportionate harm’ Native Americans face ‘from long-running environmental injustices’ and climate change.”

END_OF_DOCUMENT_TOKEN_TO_BE_REPLACED

Why Won’t Canada Back a Nuclear Weapons Ban?

In a win for the long-term survival of humanity, the United Nations’ treaty banning nuclear weapons was ratified by the 50th country, Honduras, allowing the pact to pass.

But any celebration in Canada should be muted by embarrassment at our government’s indifference to the threat nukes pose to humankind.

The Treaty on the Prohibition of Nuclear Weapons was negotiated at a 2017 UN conference, creating a legally binding agreement that would ban nuclear weapons and lead toward their total elimination.

Rather than showing support for this important meeting, Canada was in a minority of countries that voted against even holding this conference at a General Assembly vote in autumn 2016. (More than 120 countries were in favour of holding the conference; just 38 were opposed.)

Additionally, Prime Minister Justin Trudeau refused to send a representative to the 2017 conference, where two-thirds of the world’s countries were represented.

Trudeau was dismissive of the conference: “There can be all sorts of people talking about nuclear disarmament, but if they do not actually have nuclear arms, it is sort of useless to have them around, talking.”

Around the same time, Trudeau made no effort to congratulate Canadian activist Setsuko Thurlow, a survivor of the atomic bombing of Hiroshima, who co-accepted the 2017 Nobel Peace Prize on behalf of the International Campaign to Abolish Nuclear Weapons.

END_OF_DOCUMENT_TOKEN_TO_BE_REPLACED

A satchel, a biscuit and a football

Could Trump start a nuclear war?

All that’s involved is a satchel, a biscuit, and a football.

It sounds so benign, doesn’t it? Like schoolboy games. It’s anything but. If the President of the United States opens that satchel with his biscuit to access the football, that simple action could propel us into Armageddon.

As Time magazine explained it — the first time alarm bells rang around the possibility that an unhinged Donald Trump might “press the nuclear button” — the “biscuit enables him to identify himself to officials at the Pentagon with unique codes letting them know he is authorizing a nuclear strike. He would also need to specify the type of attack he wanted to carry out; the different options are delineated in the nuclear football.

“Once Trump has successfully conveyed his orders, Strategic Command, which has operational control over U.S. nuclear forces, would implement them.”

So while there is no actual nuclear button — Trump’s boasts to North Korea about his big one notwithstanding — it would be all too easy for a petulant madman to start a nuclear war. And we have one in the White House.

No one here needs to be reminded of the eye-stretching scenes of mob violence that unfolded at the Capitol on January 6, egged on by Trump on the day itself, and fueled by the reckless rhetoric and actions of the White House and its Republican lackeys over the past four years.

END_OF_DOCUMENT_TOKEN_TO_BE_REPLACED

An act of love

Lyubov Kudryashova loves nature. Now she may be jailed for defending it

In Russian, her name means love. And it’s true. Lyubov Kudryashova loves the broad valley of Russia’s Tobol River, where it meanders out of Kazakhstan into the Kurgan Oblast. Her grandfather is buried there, she was born there, and she’s raised three sons there. As far as she knows, her ancestors have always lived there.

There, below the southern Urals, frigid continental winters give way to spring floods that inundate a landscape of oxbow lakes, wetlands, forests and fields. The waters sustain a large aquifer that Russia recognizes as a strategic reserve of fresh water.

“We, native people of the land, are against a barbaric attitude towards nature,” she says. “But our voices are too low.”

Which is why the passion of this campaigning environmentalist and entrepreneur has been met with fabricated charges of encouraging terrorism via the internet. She’s now on trial in a military court in Yekaterinburg, six hours away from her small town.

Lyubov Kudryashova (above left). At right, Measurements of radioactive levels in the vicinity of the mining well of Dalur corporation show elevated levels of 8,04 micro Sieverlt per hour (mSv/hr). October 2020. (Photos courtesy of Ms. Kuddryashova.)

But Lyubov Kudryashova will not be spurned. “My ecological activity is going to continue. Well, I guess till the day the unjust court could takes away my freedom.”

END_OF_DOCUMENT_TOKEN_TO_BE_REPLACED

Posted on January 3, 2021 by beyondnuclearinternational 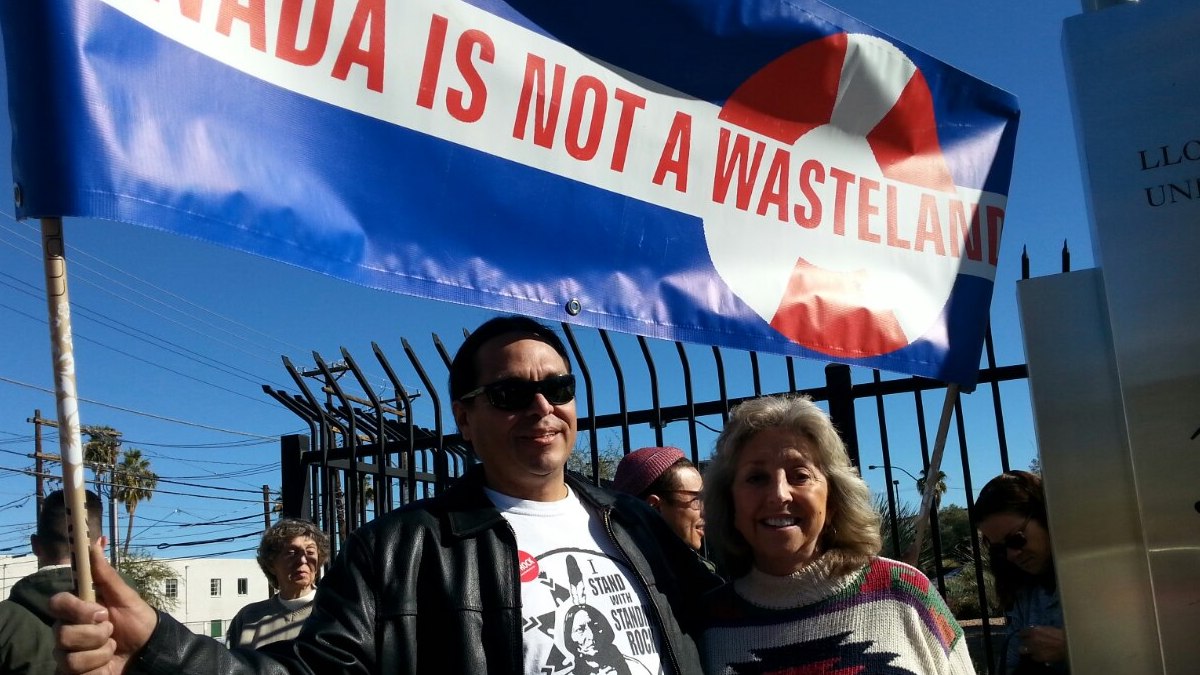 In the United States, a school day — at least one that used to involve attending in person, remember those? — begins with the Pledge of Allegiance.

In Australia, New Zealand and Canada, it more typically begins with a land acknowledgement. And not just a school day. As Teen Vogue recently explained it to its young readership, it also happens at meetings and even hockey games.

“An acknowledgment might be short: ‘This event is taking place on traditional Chickasaw land.’ Or it might be longer and more specific: ‘We are gathered today on the occupied territory of the Musqueam people, who have stewarded this land for generations,’” explained the Teen Vogue article.

It happens occasionally in the US, too, but usually at rallies — and now on activist Zoom meetings — rather than at official events. However, it shouldn’t become another trendy thing we all do to feel better and politically correct. It needs to come with meaningful action.

“Although land acknowledgements are powerful statements, they are only meaningful when they are coupled with authentic and sustained relationships with Indigenous communities and community-informed actions,” writes Michigan State University’s Native American Institute’s Guide to Land Acknowledgment.

That relationship has historically been far from meaningful. Instead, it is a dark and bloody one, leading eventually to a slow genocide, made infinitely worse once the White man had split the atom and discovered the bomb.

When the military industrial complex showed up in Shoshone country to test its atomic bombs, or excavate a mountain for a potential radioactive waste dump, they were there “as trespassers,” says Ian Zabarte, Principle Man of the Western Bands of the Shoshone Nation of Indians, and this year’s winner of Beyond Nuclear’s  Dr. Judith H. Johnsrud “Unsung Hero” Award.

“The United States gave away Shoshone property before there was the United States here,” Zabarte explained during a recent on-line teach-in about uranium and Indigenous rights.

END_OF_DOCUMENT_TOKEN_TO_BE_REPLACED

Posted on January 3, 2021 by beyondnuclearinternational

In July 2017, an overwhelming majority of the UN General Assembly adopted a landmark global agreement to ban nuclear weapons, known as the Treaty on the Prohibition of Nuclear Weapons. Ratification by the fiftieth country took place this year, on the day the United Nations celebrated its 75th anniversary. The treaty will now enter into force on January 22. Those countries that have ratified the treaty include Austria, Ireland, and Malta – three member states of the European Union – and it is to be hoped that others in Europe will soon follow.

Finland did not participate in the negotiations leading up to the treaty, and it did not vote for it. Public opinion is, however, in favour of the treaty, with one poll showing that 84 per cent of Finns would support signing up. Three parties in Finland’s coalition government also want the country to join. Foreign ministry officials have argued in hearings of the Finnish parliament’s Foreign Relations Committee that joining would weaken the Non-Proliferation Treaty (NPT) – a faulty reasoning that the Committee unanimously rejected.