The plundering of Greenland

Posted on January 24, 2021 by beyondnuclearinternational

The governments of Greenland and Denmark are encouraging large-scale mining in Greenland, including what would be the second-largest open pit uranium mine in the world. Now groups are calling on those governments to halt such desecration and instead establish an Arctic sanctuary. Your organization can sign onto this petition. Read the petition here then send your organization name (and logo, optional) to either Niels Henrik Hooge at nielshenrik@noah.dk or to Palle Bendsen at: pnb@ydun.net.

No or few World Heritage Sites probably have more or bigger mining projects in their vicinity than the Kujataa UNESCO World Heritage Site (WHS) in Southern Greenland. The property was inscribed on UNESCO’s world heritage list in 2017.

It comprises a sub-arctic farming landscape consisting of five components that represent key elements of the Norse Greenlandic and modern Inuit farming cultures.

On one hand they are distinct, on the other they are both pastoral farming cultures located on the climatic edges of viable agriculture, depending on a combination of farming, pastoralism and marine mammal hunting. The landscape constitutes the earliest introduction of farming to the Arctic.

Kujaata is situated in Kommune Kujalleq, the southernmost and smallest municipality of Greenland with its rich mineral resources. These include zinc, copper, nickel, gold, diamonds and platinum group metals, but first and foremost substantial deposits of rare earth elements (REEs) and uranium.

Greenland is estimated to hold 38.5 million tons of rare earth oxides, while total reserves for the rest of the world stand at 120 million tons. Furthermore, Greenland has some of the world’s largest undiscovered oil and gas reserves and could develop into the next environmental frontline – not unlike the Amazon Rainforest in South America.

END_OF_DOCUMENT_TOKEN_TO_BE_REPLACED

Posted on January 24, 2021 by beyondnuclearinternational

Rio Tinto faces its nuclear test in Kakadu uranium mine

By Rebecca Lawrence and Dave Sweeney

In the 1950s uranium mining began in the Alligator Rivers and Kakadu regions in the Top End of the Northern Territory. Since then, the Kakadu uranium story has generated heartache and headlines but it is set to soon come to an end with the closure of the Ranger uranium mine in early January 2021. The story is now moving from one of contest over the impacts of mining to one of concern around the adequacy of rehabilitation.

Australia has a notorious record when it comes to mine rehabilitation. Many mines are simply abandoned, and those that are rehabilitated often fail, which means complex and on-going monitoring and management is usually required. In many cases, mining companies and their shareholders are long-gone and it is usually Indigenous communities who are forced to live with toxic legacies and left to fight for governments to finance the clean-up with tax-payer money.

Two former Rio Tinto uranium operations at Mary Kathleen in western Queensland and Rum Jungle in the Northern Territory remain inadequately rehabilitated and a continuing source of environmental damage. These failed rehabilitation efforts and the pattern of cost shifting from a private company to the public purse must not be replicated at Ranger.

Yet, there are alarming signs we may be headed that way. Significant and crucial knowledge gaps remain around the closure and rehabilitation of the Ranger mine. Despite the looming closure date, mine operator Energy Resources Australia (ERA) is still unable to answer many key questions. For example, ERA has still not completed modelling of the pathways and volumes of toxic contaminants expected to move off site and into Kakadu National Park.

END_OF_DOCUMENT_TOKEN_TO_BE_REPLACED

From tears to joy

“For many Native Americans, the Department of the Interior has been known as a back-alley haven for shills, thieves and crooked, money-hungry American Indian-hating cronies.

“But now, we’ll have one of our own stepping in to run the rats out and right old wrongs.”

That’s how Simon Moya-Smith, an enrolled citizen of the Oglala Lakota Nation and a Chicano writer and journalist, opened his December 18 column for NBCs’ Think, welcoming president elect Joe Biden’s choice of U.S. Representative Deb Haaland for the position of Secretary of the Interior.

The nomination of the New Mexico Democrat, a member of Laguna Pueblo, has blown a fierce gust of fresh air into the musty cabinet rooms of Washington, DC.

“A new scintilla of hope has bloomed among us in part because Haaland, like millions of Indigenous peoples, strongly believes in and practices the Seven Generation rule,” wrote Moya-Smith. “The rule says that all significant decisions must be made with the next seven generations in mind, and includes preserving and protecting the water, the earth and the two leggeds and the four leggeds for people you will never meet — at least in this life.”

For many, the hope is more than a “scintilla”. It’s a big, blinding blast of light, an almost unimaginable transformation in a department that Trump inhabited with a man (Ryan Zinke) who was clueless enough to boast to Native Americans that he rode a horse named Tonto.

And Haaland is ready to shine that light. In a January 3 meeting with environmental justice and tribal leaders, The Hill reported that “Haaland committed to ‘fully’ honoring the U.S.’s treaty obligations to tribal nations and working with leaders to address the ‘disproportionate harm’ Native Americans face ‘from long-running environmental injustices’ and climate change.”

END_OF_DOCUMENT_TOKEN_TO_BE_REPLACED

Why Won’t Canada Back a Nuclear Weapons Ban?

In a win for the long-term survival of humanity, the United Nations’ treaty banning nuclear weapons was ratified by the 50th country, Honduras, allowing the pact to pass.

But any celebration in Canada should be muted by embarrassment at our government’s indifference to the threat nukes pose to humankind.

The Treaty on the Prohibition of Nuclear Weapons was negotiated at a 2017 UN conference, creating a legally binding agreement that would ban nuclear weapons and lead toward their total elimination.

Rather than showing support for this important meeting, Canada was in a minority of countries that voted against even holding this conference at a General Assembly vote in autumn 2016. (More than 120 countries were in favour of holding the conference; just 38 were opposed.)

Additionally, Prime Minister Justin Trudeau refused to send a representative to the 2017 conference, where two-thirds of the world’s countries were represented.

Trudeau was dismissive of the conference: “There can be all sorts of people talking about nuclear disarmament, but if they do not actually have nuclear arms, it is sort of useless to have them around, talking.”

Around the same time, Trudeau made no effort to congratulate Canadian activist Setsuko Thurlow, a survivor of the atomic bombing of Hiroshima, who co-accepted the 2017 Nobel Peace Prize on behalf of the International Campaign to Abolish Nuclear Weapons.

END_OF_DOCUMENT_TOKEN_TO_BE_REPLACED

A satchel, a biscuit and a football 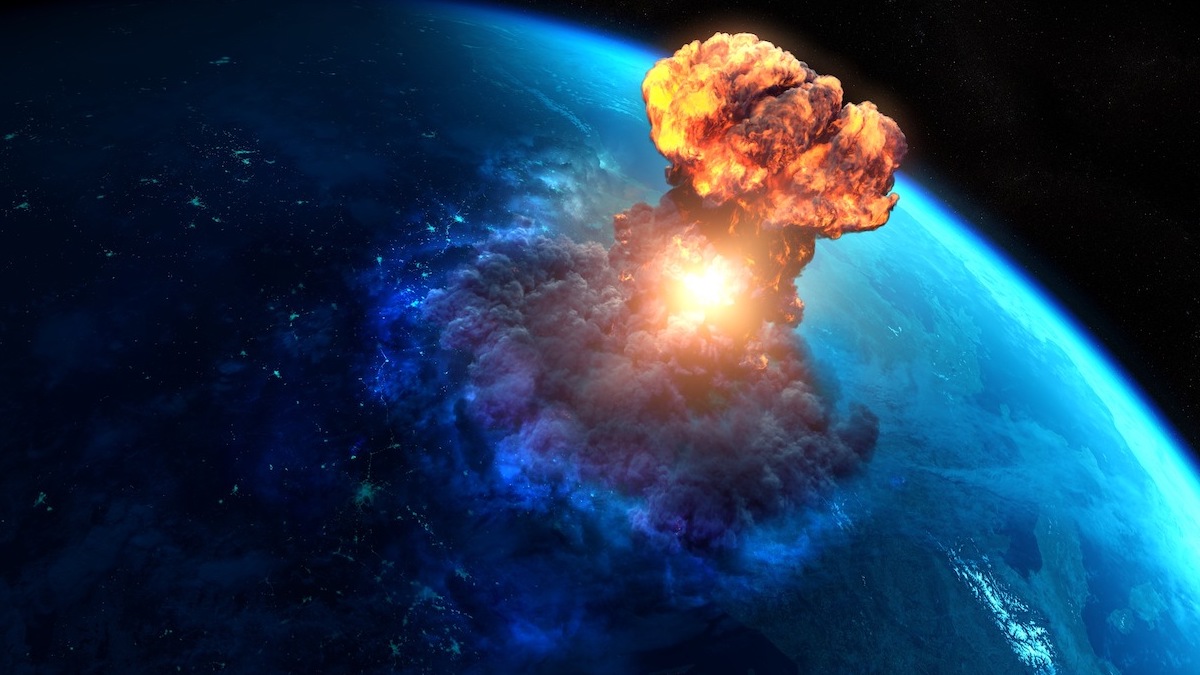 Could Trump start a nuclear war?

All that’s involved is a satchel, a biscuit, and a football.

It sounds so benign, doesn’t it? Like schoolboy games. It’s anything but. If the President of the United States opens that satchel with his biscuit to access the football, that simple action could propel us into Armageddon.

As Time magazine explained it — the first time alarm bells rang around the possibility that an unhinged Donald Trump might “press the nuclear button” — the “biscuit enables him to identify himself to officials at the Pentagon with unique codes letting them know he is authorizing a nuclear strike. He would also need to specify the type of attack he wanted to carry out; the different options are delineated in the nuclear football.

“Once Trump has successfully conveyed his orders, Strategic Command, which has operational control over U.S. nuclear forces, would implement them.”

So while there is no actual nuclear button — Trump’s boasts to North Korea about his big one notwithstanding — it would be all too easy for a petulant madman to start a nuclear war. And we have one in the White House.

No one here needs to be reminded of the eye-stretching scenes of mob violence that unfolded at the Capitol on January 6, egged on by Trump on the day itself, and fueled by the reckless rhetoric and actions of the White House and its Republican lackeys over the past four years.

END_OF_DOCUMENT_TOKEN_TO_BE_REPLACED

An act of love

Lyubov Kudryashova loves nature. Now she may be jailed for defending it

In Russian, her name means love. And it’s true. Lyubov Kudryashova loves the broad valley of Russia’s Tobol River, where it meanders out of Kazakhstan into the Kurgan Oblast. Her grandfather is buried there, she was born there, and she’s raised three sons there. As far as she knows, her ancestors have always lived there.

There, below the southern Urals, frigid continental winters give way to spring floods that inundate a landscape of oxbow lakes, wetlands, forests and fields. The waters sustain a large aquifer that Russia recognizes as a strategic reserve of fresh water.

“We, native people of the land, are against a barbaric attitude towards nature,” she says. “But our voices are too low.”

Which is why the passion of this campaigning environmentalist and entrepreneur has been met with fabricated charges of encouraging terrorism via the internet. She’s now on trial in a military court in Yekaterinburg, six hours away from her small town.

Lyubov Kudryashova (above left). At right, Measurements of radioactive levels in the vicinity of the mining well of Dalur corporation show elevated levels of 8,04 micro Sieverlt per hour (mSv/hr). October 2020. (Photos courtesy of Ms. Kuddryashova.)

But Lyubov Kudryashova will not be spurned. “My ecological activity is going to continue. Well, I guess till the day the unjust court could takes away my freedom.”